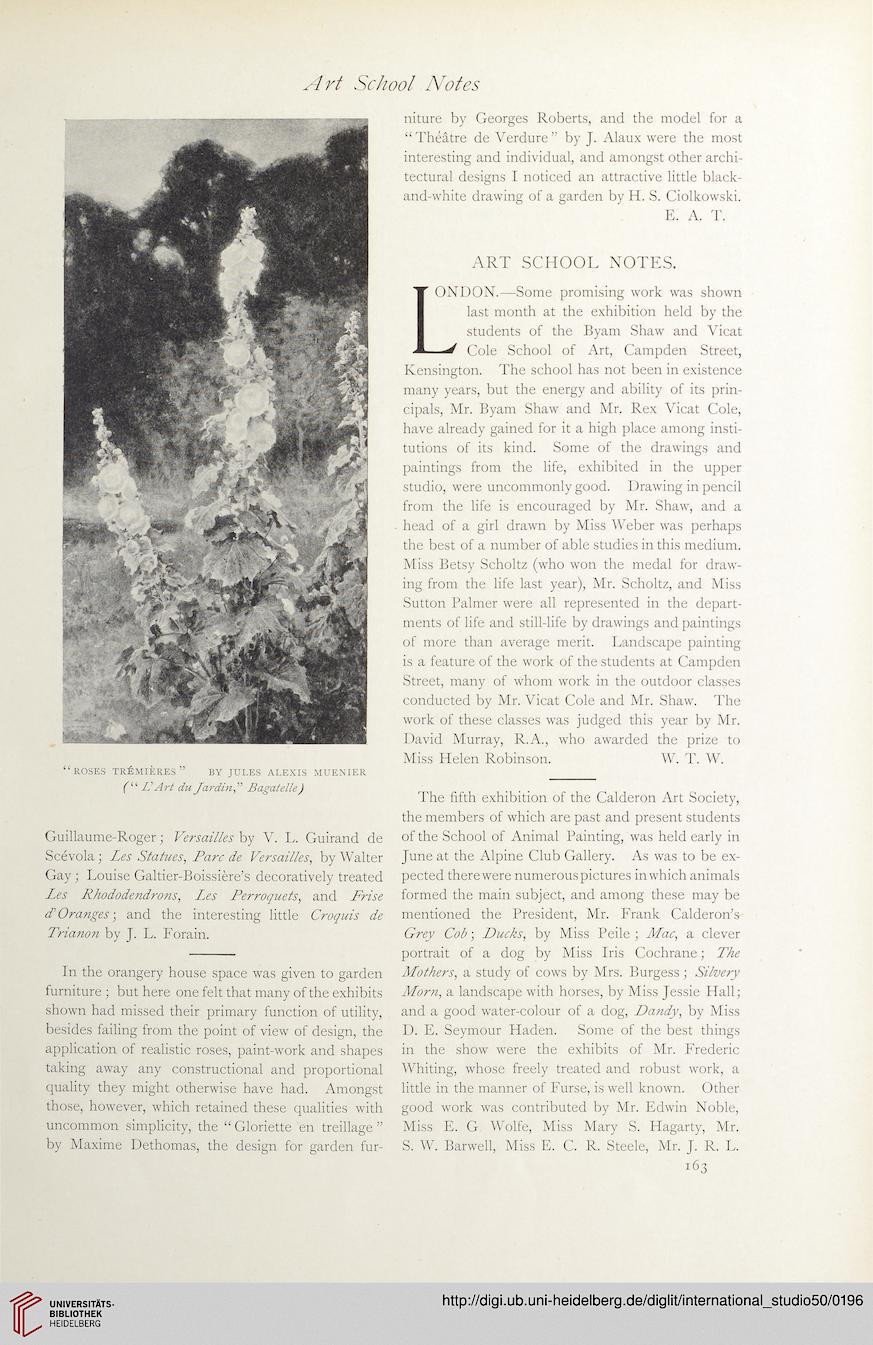 Guillaume-Roger; Versailles by V. L. Guirand de
Scevola ; Les Statues, Parc de Versailles, by Walter
Gay; Louise Galtier-Boissiere’s decoratively treated
Les Rhododendrons, Les Perroquets, and Frise
d' Oranges; and the interesting little Croquis de
Trianon by J. L. Forain.
In the orangery house space was given to garden
furniture ; but here one felt that many of the exhibits
shown had missed their primary function of utility,
besides failing from the point of view of design, the
application of realistic roses, paint-work and shapes
taking away any constructional and proportional
quality they might otherwise have had. Amongst
those, however, which retained these qualities with
uncommon simplicity, the “ Gloriette en treillage ”
by Maxime Dethomas, the design for garden fur-

niture by Georges Roberts, and the model for a
“Theatre de Verdure” by J. Alaux were the most
interesting and individual, and amongst other archi-
tectural designs I noticed an attractive little black-
and-white drawing of a garden by H. S. Ciolkowski.
E. A. T.
ART SCHOOL NOTES.
tONDON.—Some promising work was shown
last month at the exhibition held by the
students of the Byam Shaw and Vicat
Cole School of Art, Campden Street,
Kensington. The school has not been in existence
many years, but the energy and ability of its prin-
cipals, Mr. Byam Shaw and Mr. Rex Vicat Cole,
have already gained for it a high place among insti-
tutions of its kind. Some of the drawings and
paintings from the life, exhibited in the upper
studio, were uncommonly good. Drawing in pencil
from the life is encouraged by Mr. Shaw, and a
head of a girl drawn by Miss Weber was perhaps
the best of a number of able studies in this medium.
Miss Betsy Scholtz (who won the medal for draw-
ing from the life last year), Mr. Scholtz, and Miss
Sutton Palmer were all represented in the depart-
ments of life and still-life by drawings and paintings
of more than average merit. Landscape painting
is a feature of the work of the students at Campden
Street, many of whom work in the outdoor classes
conducted by Mr. Vicat Cole and Mr. Shaw. The
work of these classes was judged this year by Mr.
David Murray, R.A., who awarded the prize to
Miss Helen Robinson. W. T. W.

The fifth exhibition of the Calderon Art Society,
the members of which are past and present students
of the School of Animal Painting, was held early in
June at the Alpine Club Gallery. As was to be ex-
pected there were numerous pictures in which animals
formed the main subject, and among these may be
mentioned the President, Mr. Frank Calderon’s
Grey Cob; Ducks, by Miss Peile ; Mac, a clever
portrait of a dog by Miss Iris Cochrane; The
Mothers, a study of cows by Mrs. Burgess; Silvery
Morn, a landscape with horses, by Miss Jessie Hall;
and a good water-colour of a dog, Dandy, by Miss
D. E. Seymour Haden. Some of the best things
in the show were the exhibits of Mr. Frederic
Whiting, whose freely treated and robust work, a
little in the manner of Furse, is well known. Other
good work was contributed by Mr. Edwin Noble,
Miss E. G Wolfe, Miss Mary S. Hagarty, Mr.
S. W. Barwell, Miss E. C. R. Steele, Mr. J. R. L.
163