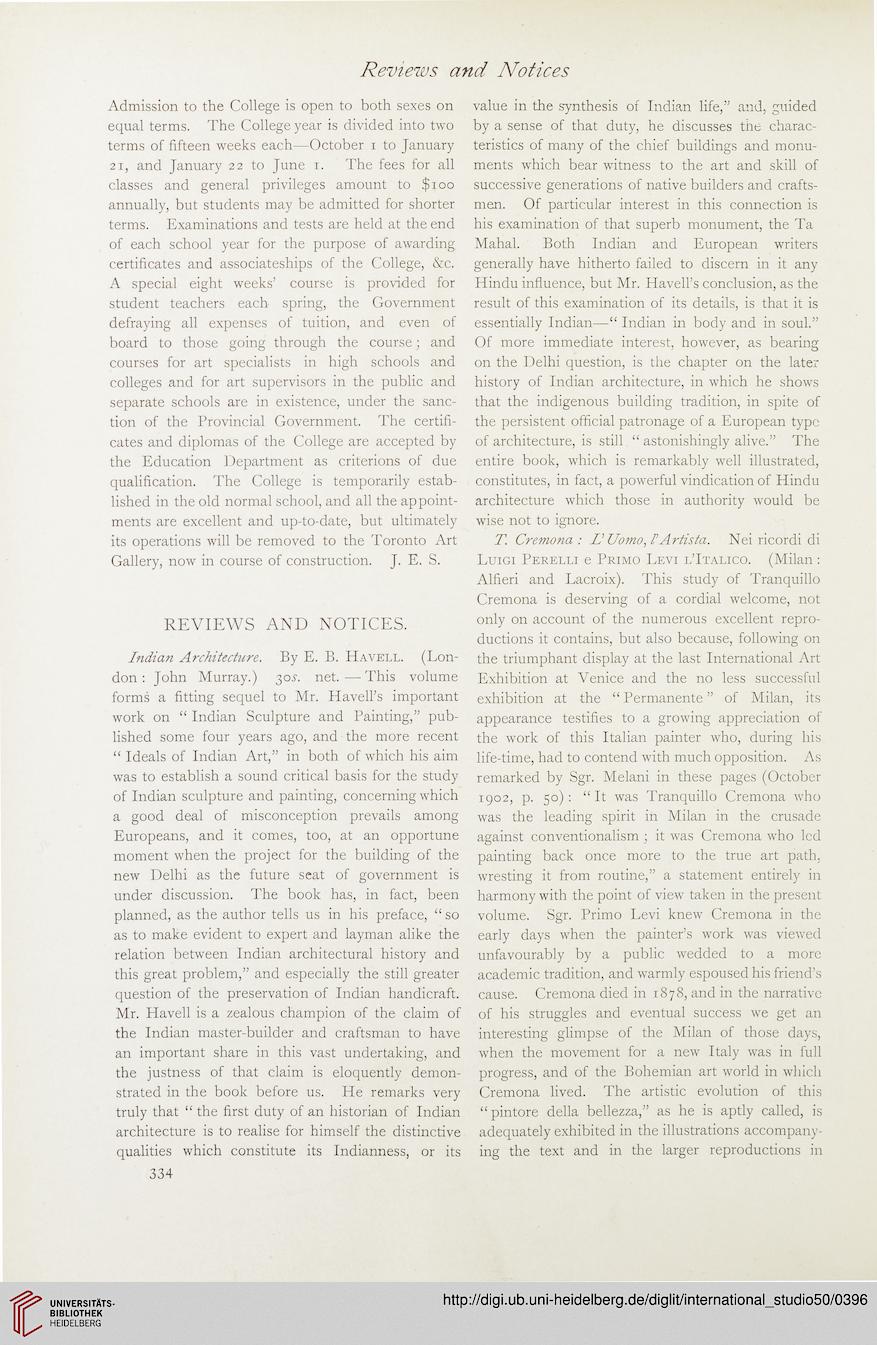 Admission to the College is open to both sexes on
equal terms. The College year is divided into two
terms of fifteen weeks each—October i to January
21, and January 22 to June 1. The fees for all
classes and general privileges amount to $100
annually, but students may be admitted for shorter
terms. Examinations and tests are held at the end
of each school year for the purpose of awarding
certificates and associateships of the College, &c.
A special eight weeks’ course is provided for
student teachers each spring, the Government
defraying all expenses of tuition, and even of
board to those going through the course; and
courses for art specialists in high schools and
colleges and for art supervisors in the public and
separate schools are in existence, under the sanc-
tion of the Provincial Government. The certifi-
cates and diplomas of the College are accepted by
the Education Department as criterions of due
qualification. The College is temporarily estab-
lished in the old normal school, and all the appoint-
ments are excellent and up-to-date, but ultimately
its operations will be removed to the Toronto Art
Gallery, now in course of construction. J. E. S.
REVIEWS AND NOTICES.
Indian Architecture. By E. B. Havell. (Lon-
don : John Murray.) 305. net.—This volume
forms a fitting sequel to Mr. Havell’s important
work on “ Indian Sculpture and Painting,” pub-
lished some four years ago, and the more recent
“ Ideals of Indian Art,” in both of which his aim
was to establish a sound critical basis for the study
of Indian sculpture and painting, concerning which
a good deal of misconception prevails among
Europeans, and it comes, too, at an opportune
moment when the project for the building of the
new Delhi as the future seat of government is
under discussion. The book has, in fact, been
planned, as the author tells us in his preface, “ so
as to make evident to expert and layman alike the
relation between Indian architectural history and
this great problem,” and especially the still greater
question of the preservation of Indian handicraft.
Mr. Havell is a zealous champion of the claim of
the Indian master-builder and craftsman to have
an important share in this vast undertaking, and
the justness of that claim is eloquently demon-
strated in the book before us. He remarks very
truly that “ the first duty of an historian of Indian
architecture is to realise for himself the distinctive
qualities which constitute its Indianness, or its
334

value in the synthesis of Indian life,” and, guided
by a sense of that duty, he discusses the charac-
teristics of many of the chief buildings and monu-
ments which bear witness to the art and skill of
successive generations of native builders and crafts-
men. Of particular interest in this connection is
his examination of that superb monument, the Ta
Mahal. Both Indian and European writers
generally have hitherto failed to discern in it any
Hindu influence, but Mr. Havell’s conclusion, as the
result of this examination of its details, is that it is
essentially Indian—“ Indian in body and in soul.”
Of more immediate interest, however, as bearing
on the Delhi question, is the chapter on the later
history of Indian architecture, in which he shows
that the indigenous building tradition, in spite of
the persistent official patronage of a European type
of architecture, is still “ astonishingly alive.” The
entire book, which is remarkably well illustrated,
constitutes, in fact, a powerful vindication of Hindu
architecture which those in authority would be
wise not to ignore.
T. Cremona : I’ Uomo, i’Artista. Nei ricordi di
Luigi Perelli e Primo Levi l’Italico. (Milan:
Alfieri and Lacroix). This study of Tranquillo
Cremona is deserving of a cordial welcome, not
only on account of the numerous excellent repro-
ductions it contains, but also because, following on
the triumphant display at the last International Art
Exhibition at Venice and the no less successful
exhibition at the “ Permanente ” of Milan, its
appearance testifies to a growing appreciation of
the work of this Italian painter who, during his
life-time, had to contend with much opposition. As
remarked by Sgr. Melani in these pages (October
1902, p. 50): “It was Tranquillo Cremona who
was the leading spirit in Milan in the crusade
against conventionalism ; it was Cremona who led
painting back once more to the true art path,
wresting it from routine,” a statement entirely in
harmony with the point of view taken in the present
volume. Sgr. Primo Levi knew Cremona in the
early days when the painter’s work was viewed
unfavourably by a public wedded to a more
academic tradition, and warmly espoused his friend’s
cause. Cremona died in 1878, and in the narrative
of his struggles and eventual success we get an
interesting glimpse of the Milan of those days,
when the movement for a new Italy was in full
progress, and of the Bohemian art world in which
Cremona lived. The artistic evolution of this
“pintore della bellezza,” as he is aptly called, is
adequately exhibited in the illustrations accompany-
ing the text and in the larger reproductions in