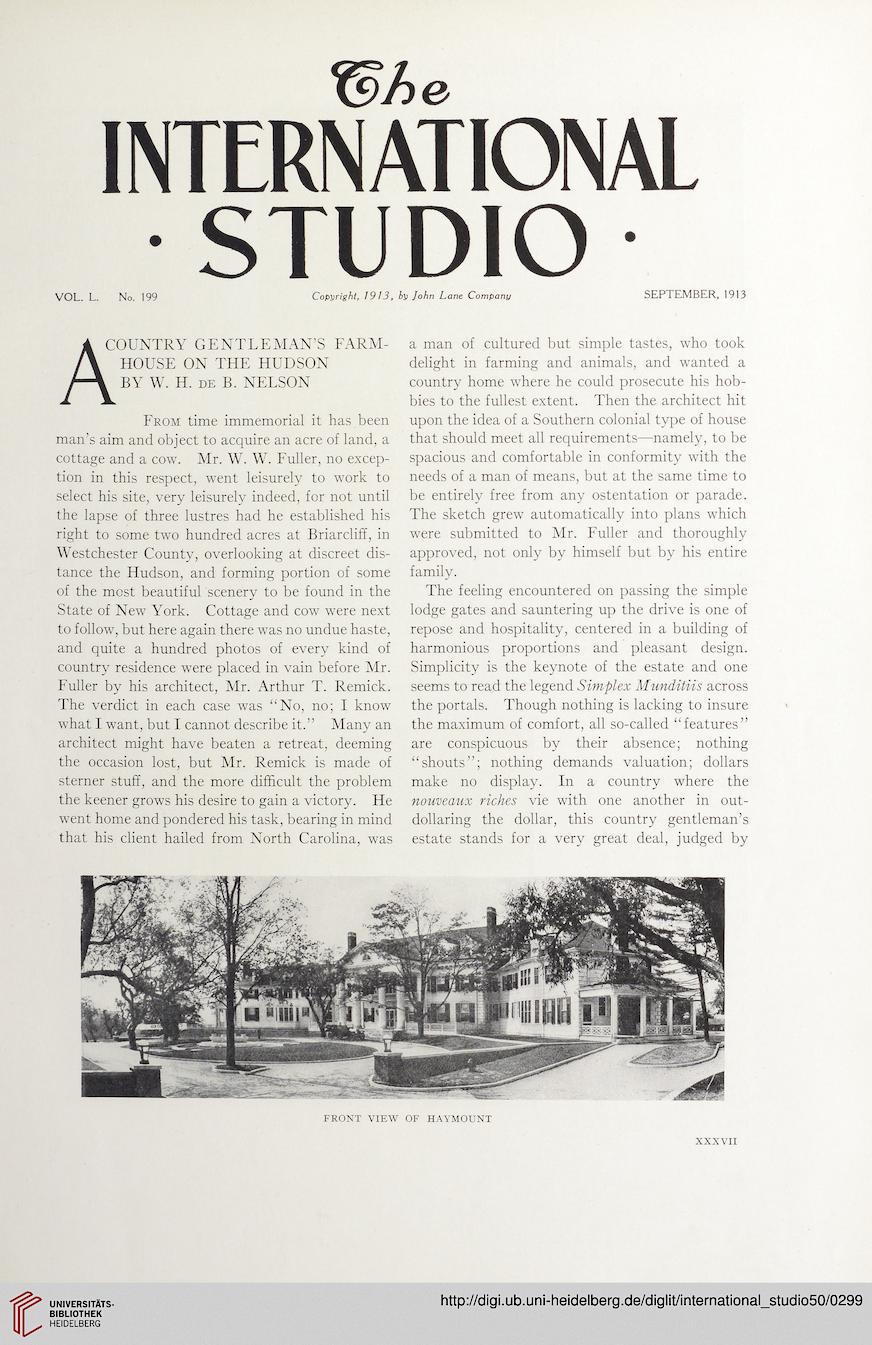 < COUNTRY GENTLEMAN’S FARM-
/\ HOUSE ON THE HUDSON
AA BY W. H. DE B. NELSON
From time immemorial it has been
man’s aim and object to acquire an acre of land, a
cottage and a cow. Mr. W. W. Fuller, no excep-
tion in this respect, went leisurely to work to
select his site, very leisurely indeed, for not until
the lapse of three lustres had he established his
right to some two hundred acres at Briarcliff, in
Westchester County, overlooking at discreet dis-
tance the Hudson, and forming portion of some
of the most beautiful scenery to be found in the
State of New York. Cottage and cow were next
to follow, but here again there was no undue haste,
and quite a hundred photos of every kind of
country residence were placed in vain before Mr.
Fuller by his architect, Mr. Arthur T. Remick.
The verdict in each case was “No, no; I know
what I want, but I cannot describe it.” Many an
architect might have beaten a retreat, deeming
the occasion lost, but Mr. Remick is made of
sterner stuff, and the more difficult the problem
the keener grows his desire to gain a victory. He
went home and pondered his task, bearing in mind
that his client hailed from North Carolina, was

a man of cultured but simple tastes, who took
delight in farming and animals, and wanted a
country home where he could prosecute his hob-
bies to the fullest extent. Then the architect hit
upon the idea of a Southern colonial type of house
that should meet all requirements—namely, to be
spacious and comfortable in conformity with the
needs of a man of means, but at the same time to
be entirely free from any ostentation or parade.
The sketch grew automatically into plans which
were submitted to Mr. Fuller and thoroughly
approved, not only by himself but by his entire
family.
The feeling encountered on passing the simple
lodge gates and sauntering up the drive is one of
repose and hospitality, centered in a building of
harmonious proportions and pleasant design.
Simplicity is the keynote of the estate and one
seems to read the legend Simplex Munditiis across
the portals. Though nothing is lacking to insure
the maximum of comfort, all so-called “features”
are conspicuous by their absence; nothing
“shouts”; nothing demands valuation; dollars
make no display. In a country where the
nouveaux riches vie with one another in out-
dollaring the dollar, this country gentleman’s
estate stands for a very great deal, judged by