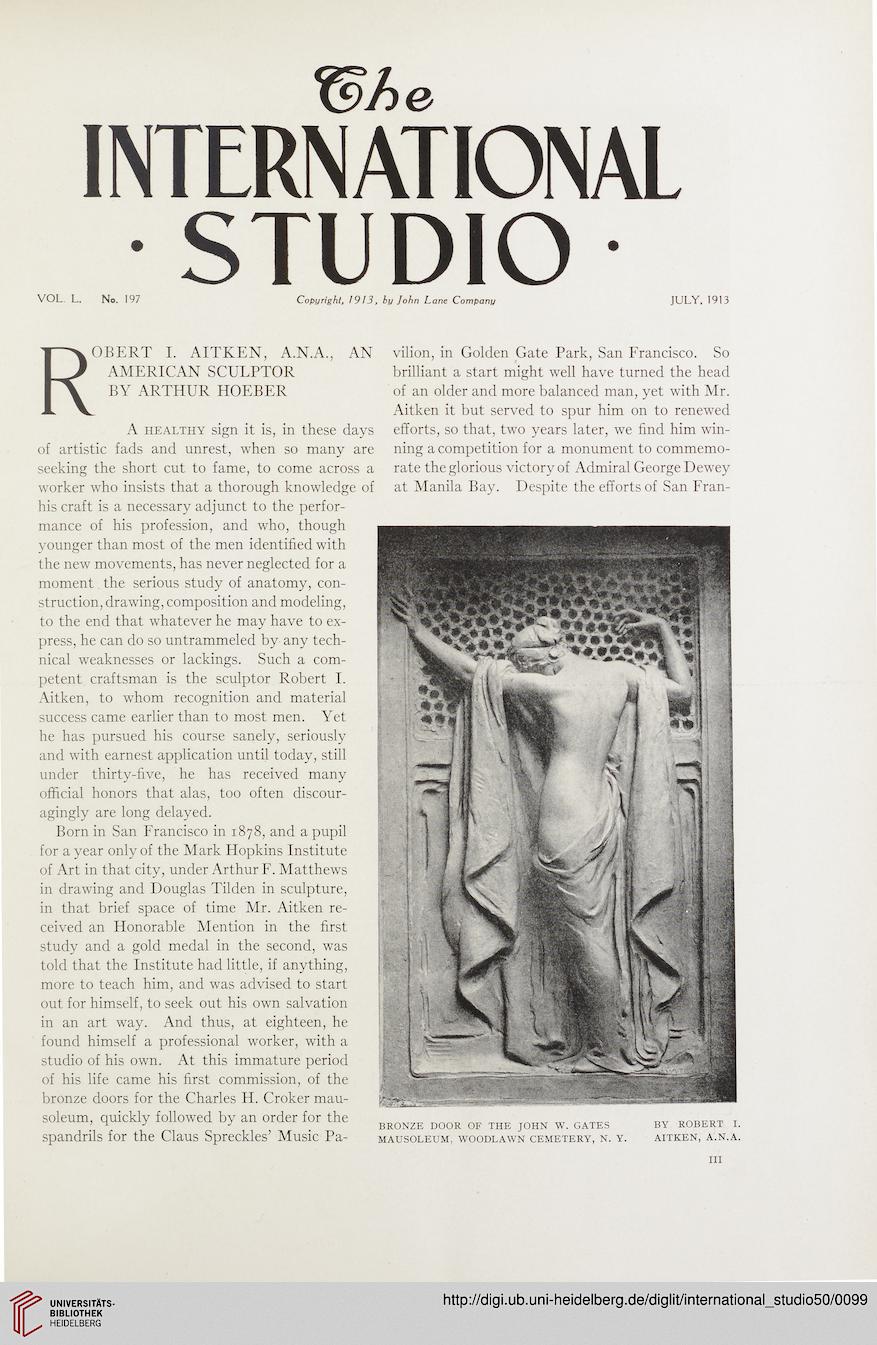 Robert i. aitken, a.n.a., an
AMERICAN SCULPTOR
BY ARTHUR HOEBER
A healthy sign it is, in these days
of artistic fads and unrest, when so many are
seeking the short cut to fame, to come across a
worker who insists that a thorough knowledge of
his craft is a necessary adjunct to the perfor-
mance of his profession, and who, though
younger than most of the men identified with
the new movements, has never neglected for a
moment. the serious study of anatomy, con-
struction, drawing, composition and modeling,
to the end that whatever he may have to ex-
press, he can do so untrammeled by any tech-
nical weaknesses or lackings. Such a com-
petent craftsman is the sculptor Robert I.
Aitken, to whom recognition and material
success came earlier than to most men. Yet
he has pursued his course sanely, seriously
and with earnest application until today, still
under thirty-five, he has received many
official honors that alas, too often discour-
agingly are long delayed.
Born in San Francisco in 1878, and a pupil
for a year only of the Mark Hopkins Institute
of Art in that city, under Arthur F. Matthews
in drawing and Douglas Tilden in sculpture,
in that brief space of time Mr. Aitken re-
ceived an Honorable Mention in the first
study and a gold medal in the second, was
told that the Institute had little, if anything,
more to teach him, and was advised to start
out for himself, to seek out his own salvation
in an art way. And thus, at eighteen, he
found himself a professional worker, with a
studio of his own. At this immature period
of his life came his first commission, of the
bronze doors for the Charles H. Croker mau-
soleum, quickly followed by an order for the
spandrils for the Claus Spreckles’ Music Pa-

vilion, in Golden Gate Park, San Francisco. So
brilliant a start might well have turned the head
of an older and more balanced man, yet with Mr.
Aitken it but served to spur him on to renewed
efforts, so that, two years later, we find him win-
ning a competition for a monument to commemo-
rate the glorious victory of Admiral George Dewey
at Manila Bay. Despite the efforts of San Fran-