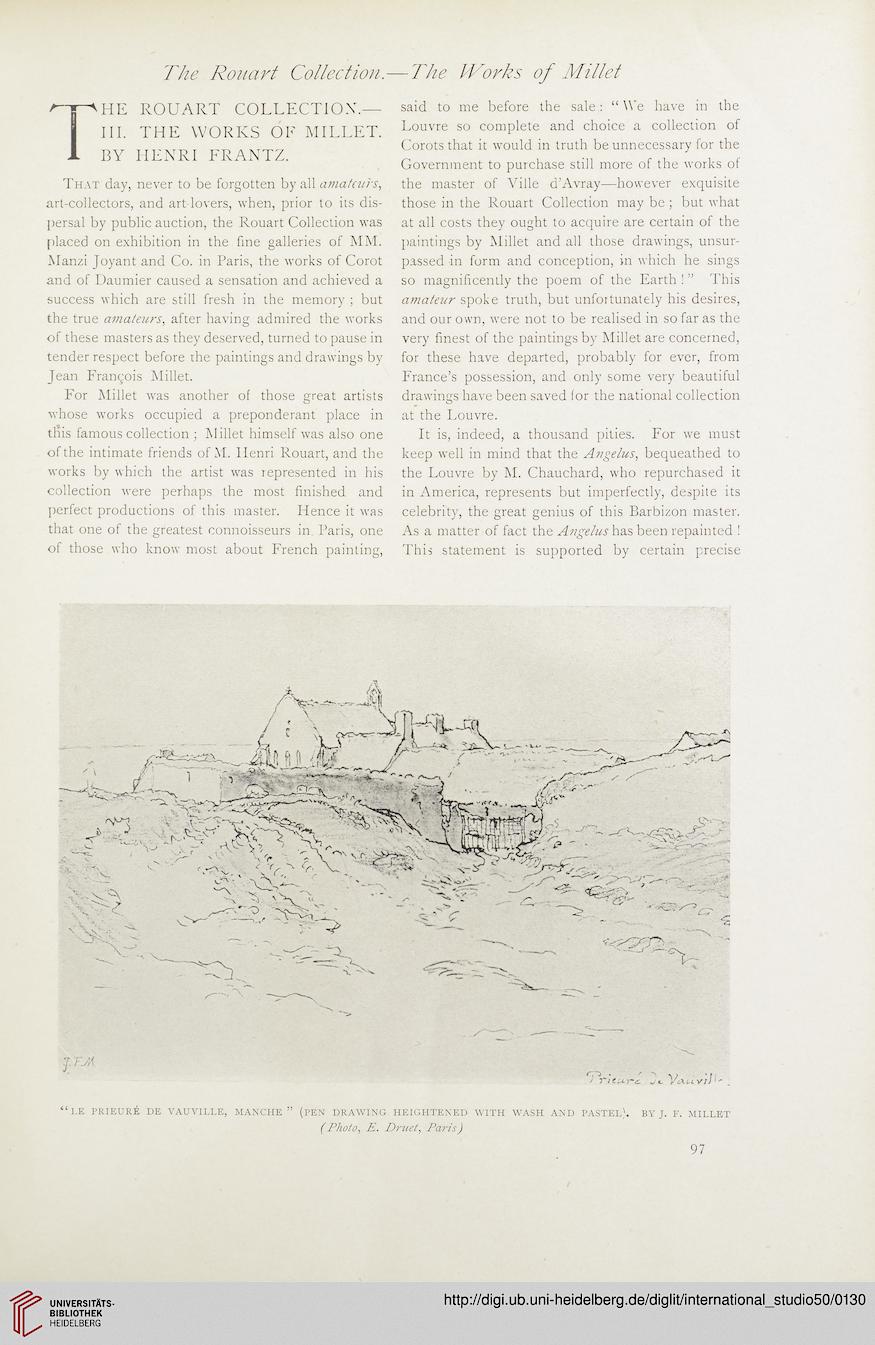 Information about OCR text
The Rouart Collection.
HE ROUART COLLECTION.—
III. THE WORKS OE MILLET.
BY HENRI FRANTZ.
That day, never to be forgotten by all amateurs,
art-collectors, and art lovers, when, prior to its dis-
persal by public auction, the Rouart Collection was
placed on exhibition in the fine galleries of MM.
Manzi Joyant and Co. in Paris, the works of Corot
and of Daumier caused a sensation and achieved a
success which are still fresh in the memory ; but
the true amateurs, after having admired the works
of these masters as they deserved, turned to pause in
tender respect before rhe paintings and drawings by
Jean Francois Millet.
For Millet was another of those great artists
whose works occupied a preponderant place in
this famous collection ; Millet himself was also one
of the intimate friends of M. Henri Rouart, and the
works by which the artist was represented in his
collection were perhaps the most finished and
perfect productions of this master. Hence it was
that one of the greatest connoisseurs in Paris, one
of those who know most about French painting,

-The Works of Millet
said to me before the sale: “ We have in the
Louvre so complete and choice a collection of
Corots that it would in truth be unnecessary for the
Government to purchase still more of the works of
the master of Ville d’Avray—however exquisite
those in the Rouart Collection may be ; but what
at all costs they ought to acquire are certain of the
paintings by Millet and all those drawings, unsur-
passed in form and conception, in which he sings
so magnificently the poem of the Earth 1 ” This
amateur spoke truth, but unfortunately his desires,
and our own, were not to be realised in so far as the
very finest of the paintings by Millet are concerned,
for these have departed, probably for ever, from
France’s possession, and only some very beautiful
drawings have been saved lor the national collection
at the Louvre.
It is, indeed, a thousand pities. For we must
keep well in mind that the Angel/us, bequeathed to
the Louvre by M. Chauchard, who repurchased it
in America, represents but imperfectly, despite its
celebrity, the great genius of this Barbizon master.
As a matter of fact the Angelus\xw=> been repainted 1
This statement is supported by certain precise