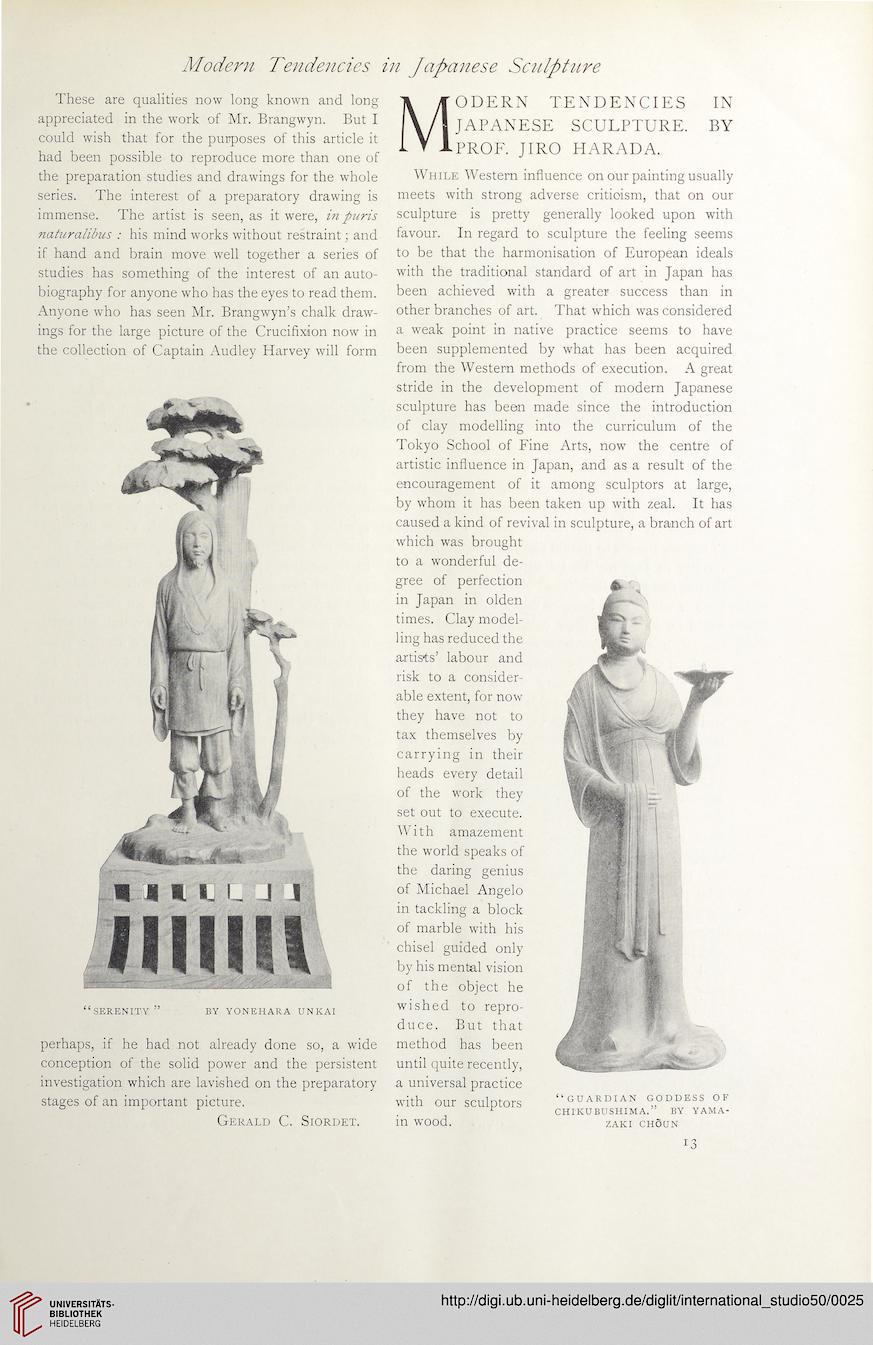 These are qualities now long known and long
appreciated in the work of Mr. Brangwyn. But I
could wish that for the purposes of this article it
had been possible to reproduce more than one of
the preparation studies and drawings for the whole
series. The interest of a preparatory drawing is
immense. The artist is seen, as it were, in puris
naturalibus : his mind works without restraint; and
if hand and brain move well together a series of
studies has something of the interest of an auto-
biography for anyone who has the eyes to read them.
Anyone who has seen Mr. Brangwyn’s chalk draw-
ings for the large picture of the Crucifixion now in
the collection of Captain Audley Harvey will form


perhaps, if he had not already done so, a wide
conception of the solid power and the persistent
investigation which are lavished on the preparatory
stages of an important picture.
Gerald C. Siordet.


While Western influence on our painting usually
meets with strong adverse criticism, that on our
sculpture is pretty generally looked upon with
favour. In regard to sculpture the feeling seems
to be that the harmonisation of European ideals
with the traditional standard of art in Japan has
been achieved with a greater success than in
other branches of art. That which was considered
a weak point in native practice seems to have
been supplemented by what has been acquired
from the Western methods of execution. A great
stride in the development of modern Japanese
sculpture has been made since the introduction
of clay modelling into the curriculum of the
Tokyo School of Fine Arts, now the centre of
artistic influence in Japan, and as a result of the
encouragement of it among sculptors at large,
by whom it has been taken up with zeal. It has
caused a kind of revival in sculpture, a branch of art
which was brought
to a wonderful de¬
gree of perfection
in Japan in olden
times. Clay model¬
ling has reduced the
artists’ labour and
risk to a consider¬
able extent, for now
they have not to
tax themselves by
carrying in their
heads every detail
of the work they
set out to execute.
With amazement
the world speaks of
the daring genius
of Michael Angelo
in tackling a block
of marble with his
chisel guided only
by his mental vision
of the object he
wished to repro¬
duce. But that
method has been
until quite recently,
a universal practice
with our sculptors
in wood.