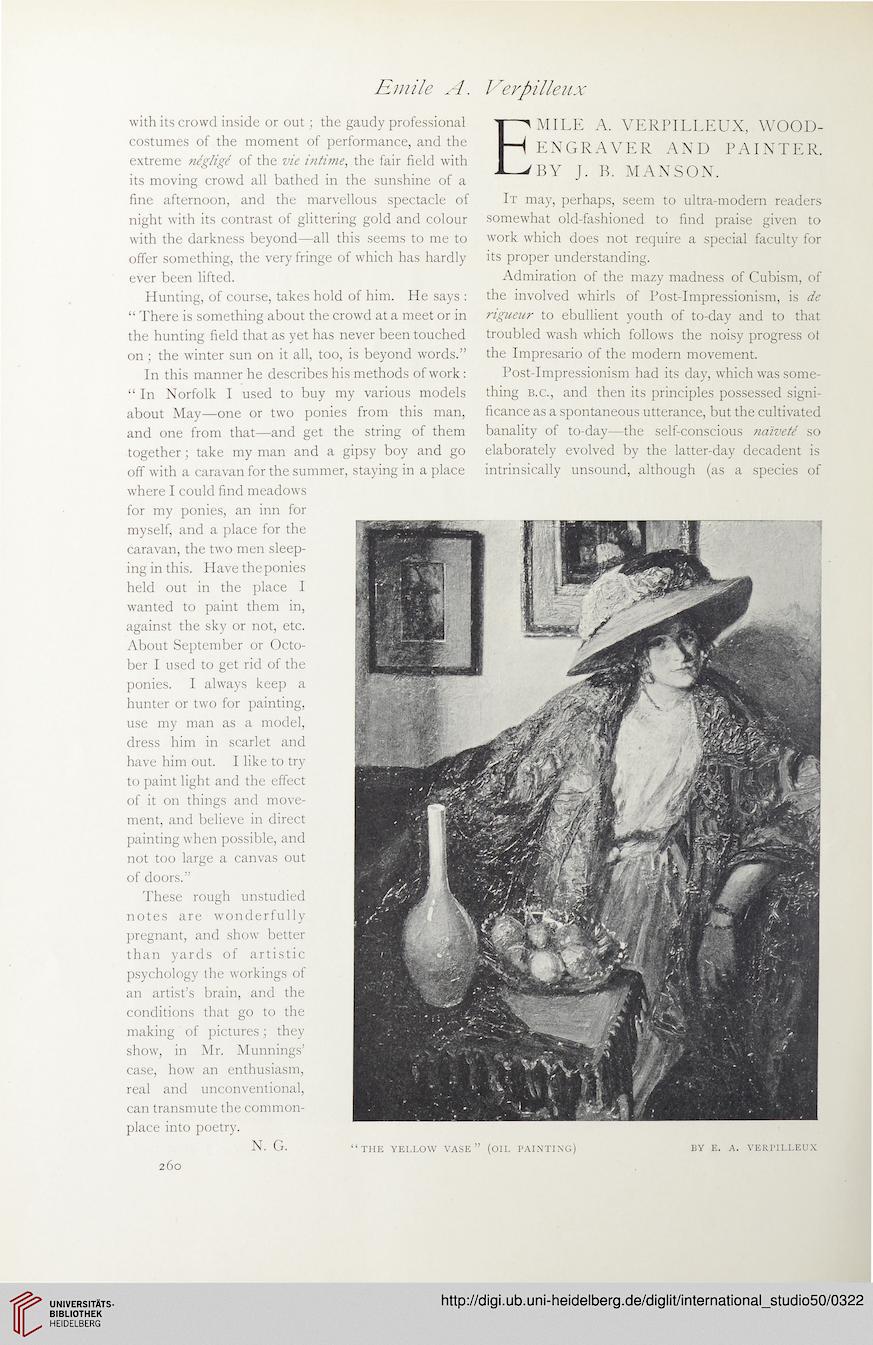 with its crowd inside or out; the gaudy professional
costumes of the moment of performance, and the
extreme neglige of the vie intime, the fair field with
its moving crowd all bathed in the sunshine of a
fine afternoon, and the marvellous spectacle of
night with its contrast of glittering gold and colour
with the darkness beyond—all this seems to me to
offer something, the very fringe of which has hardly
ever been lifted.
Hunting, of course, takes hold of him. He says :
“ There is something about the crowd at a meet or in
the hunting field that as yet has never been touched
on; the winter sun on it all, too, is beyond words.”
In this manner he describes his methods of work :
“ In Norfolk I used to buy my various models
about May—one or two ponies from this man,
and one from that—and get the string of them
together; take my man and a gipsy boy and go
off with a caravan for the summer, staying in a place
where I could find meadows
for my ponies, an inn for
myself, and a place for the
caravan, the two men sleep¬
ing in this. Have the ponies
held out in the place I
wanted to paint them in,
against the sky or not, etc.
About September or Octo¬
ber I used to get rid of the
ponies. I always keep a
hunter or two for painting,
use my man as a model,
dress him in scarlet and
have him out. I like to try
to paint light and the effect
of it on things and move¬
ment, and believe in direct
painting when possible, and
not too large a canvas out
of doors.”
These rough unstudied
notes are wonderfully
pregnant, and show better
than yards of artistic
psychology the workings of
an artist’s brain, and the
conditions that go to the
making of pictures; they
show, in Mr. M unnings’
case, how an enthusiasm,
real and unconventional,
can transmute the common¬
place into poetry.

Emile a. verpilleux, wood-
engraver AND PAINTER.
BY J. B. MANSON.
It may, perhaps, seem to ultra-modern readers
somewhat old-fashioned to find praise given to
work which does not require a special faculty for
its proper understanding.
Admiration of the mazy madness of Cubism, of
the involved whirls of Post-Impressionism, is de
ngueur to ebullient youth of to-day and to that
troubled wash which follows the noisy progress ot
the Impresario of the modern movement.
Post-Impressionism had its day, which was some-
thing B.c., and then its principles possessed signi-
ficance as a spontaneous utterance, but the cultivated
banality of to-day—the self-conscious naivete so
elaborately evolved by the latter-day decadent is
intrinsically unsound, although (as a species of