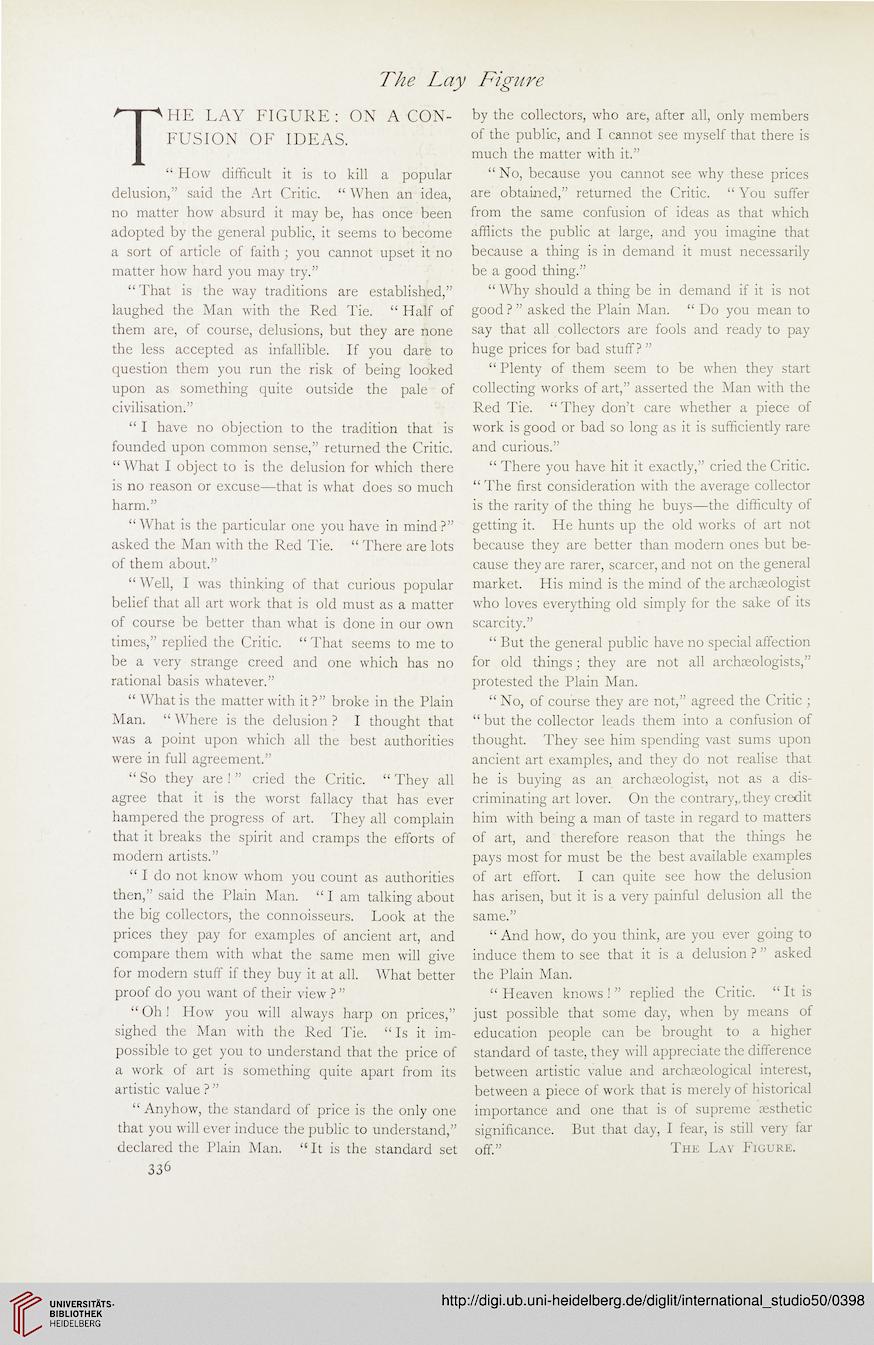 The lay figure: on a con-
fusion OF IDEAS.
“ How difficult it is to kill a popular
delusion,” said the Art Critic. “ When an idea,
no matter how absurd it may be, has once been
adopted by the general public, it seems to become
a sort of article of faith ; you cannot upset it no
matter how hard you may try.”
“ That is the way traditions are established,”
laughed the Man with the Red Tie. “ Half of
them are, of course, delusions, but they are none
the less accepted as infallible. If you dare to
question them you run the risk of being looked
upon as something quite outside the pale of
civilisation.”
“ I have no objection to the tradition that is
founded upon common sense,” returned the Critic.
“ What I object to is the delusion for which there
is no reason or excuse—that is what does so much
harm.”
“ What is the particular one you have in mind ?”
asked the Man with the Red Tie. “ There are lots
of them about.”
“Well, I was thinking of that curious popular
belief that all art work that is old must as a matter
of course be better than what is done in our own
times,” replied the Critic. “ That seems to me to
be a very strange creed and one which has no
rational basis whatever.”
“ What is the matter with it ?” broke in the Plain
Man. “ Where is the delusion ? I thought that
was a point upon which all the best authorities
were in full agreement.”
“ So they are ! ” cried the Critic. “ They all
agree that it is the worst fallacy that has ever
hampered the progress of art. They all complain
that it breaks the spirit and cramps the efforts of
modern artists.”
“ I do not know whom you count as authorities
then,” said the Plain Man. “ I am talking about
the big collectors, the connoisseurs. Look at the
prices they pay for examples of ancient art, and
compare them with what the same men will give
for modern stuff if they buy it at all. What better
proof do you want of their view ? ”
“ Oh ! How you will always harp on prices,”
sighed the Man with the Red Tie. “Is it im-
possible to get you to understand that the price of
a work of art is something quite apart from its
artistic value ? ”
“ Anyhow, the standard of price is the only one
that you will ever induce the public to understand,”
declared the Plain Man. “ It is the standard set
336

by the collectors, who are, after all, only members
of the public, and I cannot see myself that there is
much the matter with it.”
“ No, because you cannot see why these prices
are obtained,” returned the Critic. “ You suffer
from the same confusion of ideas as that which
afflicts the public at large, and you imagine that
because a thing is in demand it must necessarily
be a good thing.”
“ Why should a thing be in demand if it is not
good? ” asked the Plain Man. “ Do you mean to
say that all collectors are fools and ready to pay
huge prices for bad stuff? ”
“ Plenty of them seem to be when they start
collecting works of art,” asserted the Man with the
Red Tie. “They don’t care whether a piece of
work is good or bad so long as it is sufficiently rare
and curious.”
“ There you have hit it exactly,” cried the Critic.
“ The first consideration with the average collector
is the rarity of the thing he buys—the difficulty of
getting it. He hunts up the old works of art not
because they are better than modern ones but be-
cause they are rarer, scarcer, and not on the general
market. His mind is the mind of the archaeologist
who loves everything old simply for the sake of its
scarcity.”
“ But the general public have no special affection
for old things; they are not all archaeologists,”
protested the Plain Man.
“ No, of course they are not,” agreed the Critic ;
“ but the collector leads them into a confusion of
thought. They see him spending vast sums upon
ancient art examples, and they do not realise that
he is buying as an archaeologist, not as a dis-
criminating art lover. On the contrary, they credit
him with being a man of taste in regard to matters
of art, and therefore reason that the things he
pays most for must be the best available examples
of art effort. I can quite see how the delusion
has arisen, but it is a very painful delusion all the
same.”
“ And how, do you think, are you ever going to
induce them to see that it is a delusion ? ” asked
the Plain Man.
“ Heaven knows ! ” replied the Critic. “ It is
just possible that some day, when by means of
education people can be brought to a higher
standard of taste, they will appreciate the difference
between artistic value and archaeological interest,
between a piece of work that is merely of historical
importance and one that is of supreme aesthetic
significance. But that day, I fear, is still very far
off.” The Lay Figure.