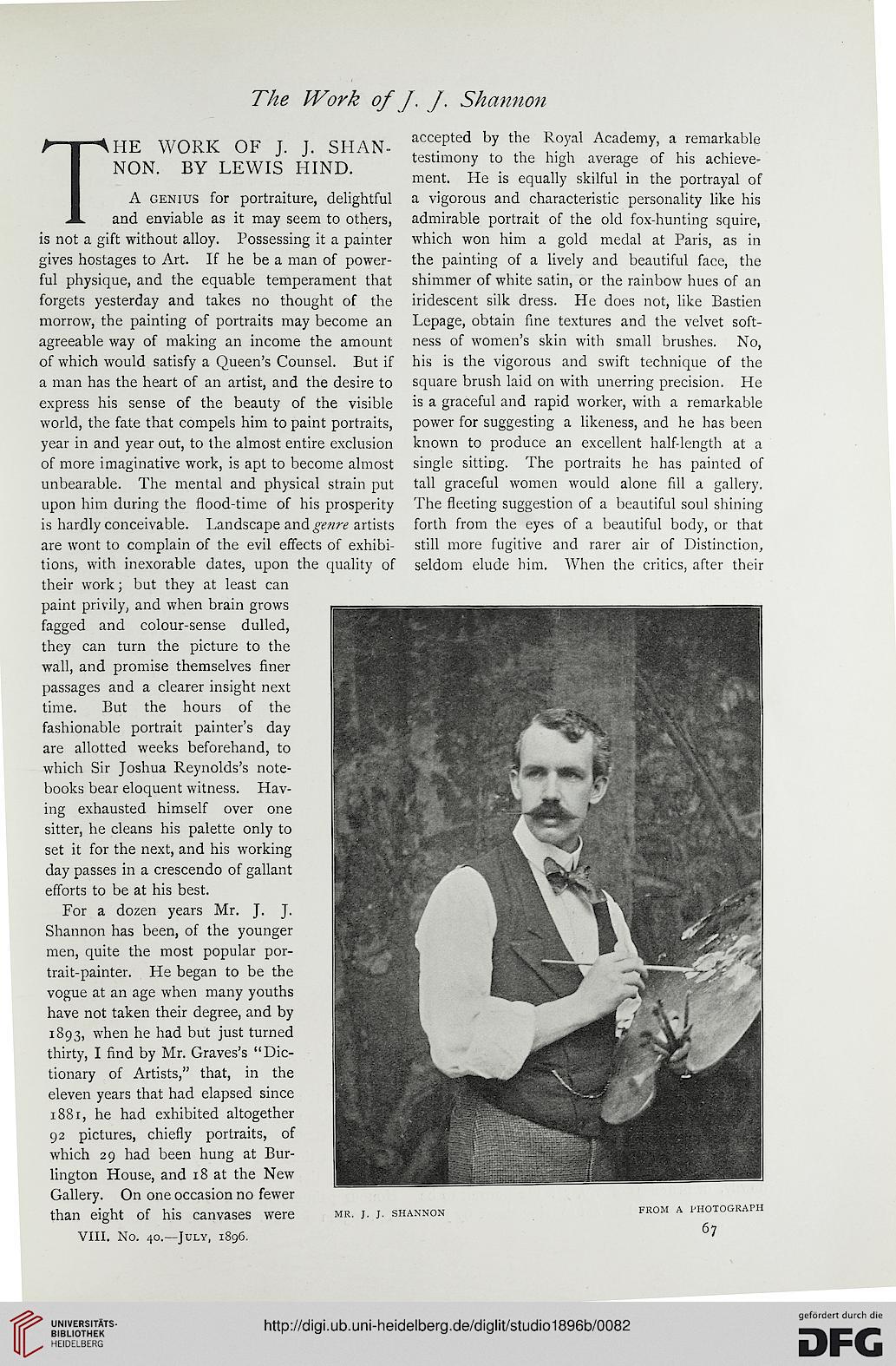 Information about OCR text
The Work of J. J. Shannon

ment. He is equally skilful in the portrayal of
A genius for portraiture, delightful a vigorous and characteristic personality like his
and enviable as it may seem to others, admirable portrait of the old fox-hunting squire,
is not a gift without alloy. Possessing it a painter which won him a gold medal at Paris, as in
gives hostages to Art. If he be a man of power- the painting of a lively and beautiful face, the
ful physique, and the equable temperament that shimmer of white satin, or the rainbow hues of an
forgets yesterday and takes no thought of the iridescent silk dress. He does not, like Bastien
morrow, the painting of portraits may become an Lepage, obtain fine textures and the velvet soft-
agreeable way of making an income the amount ness of women's skin with small brushes. No,
of which would satisfy a Queen's Counsel. But if his is the vigorous and swift technique of the
a man has the heart of an artist, and the desire to square brush laid on with unerring precision. He
express his sense of the beauty of the visible is a graceful and rapid worker, with a remarkable
world, the fate that compels him to paint portraits, power for suggesting a likeness, and he has been
year in and year out, to the almost entire exclusion known to produce an excellent half-length at a
of more imaginative work, is apt to become almost single sitting. The portraits he has painted of
unbearable. The mental and physical strain put tall graceful women would alone fill a gallery,
upon him during the flood-time of his prosperity The fleeting suggestion of a beautiful soul shining
is hardly conceivable. Landscape and genre artists forth from the eyes of a beautiful body, or that
are wont to complain of the evil effects of exhibi- still more fugitive and rarer air of Distinction,
tions, with inexorable dates, upon the quality of seldom elude him. When the critics, after their
their work; but they at least can
paint privily, and when brain grows
fagged and colour-sense dulled,
they can turn the picture to the
wall, and promise themselves finer
passages and a clearer insight next
time. But the hours of the
fashionable portrait painter's day
are allotted weeks beforehand, to
which Sir Joshua Reynolds's note-
books bear eloquent witness. Hav-
ing exhausted himself over one
sitter, he cleans his palette only to
set it for the next, and his working
day passes in a crescendo of gallant
efforts to be at his best.

For a dozen years Mr. J. J.
Shannon has been, of the younger
men, quite the most popular por-
trait-painter. He began to be the
vogue at an age when many youths
have not taken their degree, and by
1893, when he had but just turned
thirty, I find by Mr. Graves's "Dic-
tionary of Artists," that, in the
eleven years that had elapsed since
1881, he had exhibited altogether
92 pictures, chiefly portraits, of
which 29 had been hung at Bur-
lington House, and 18 at the New
Gallery. On one occasion no fewer
than eight of his canvases were mr. j. j. shannon from a photograph