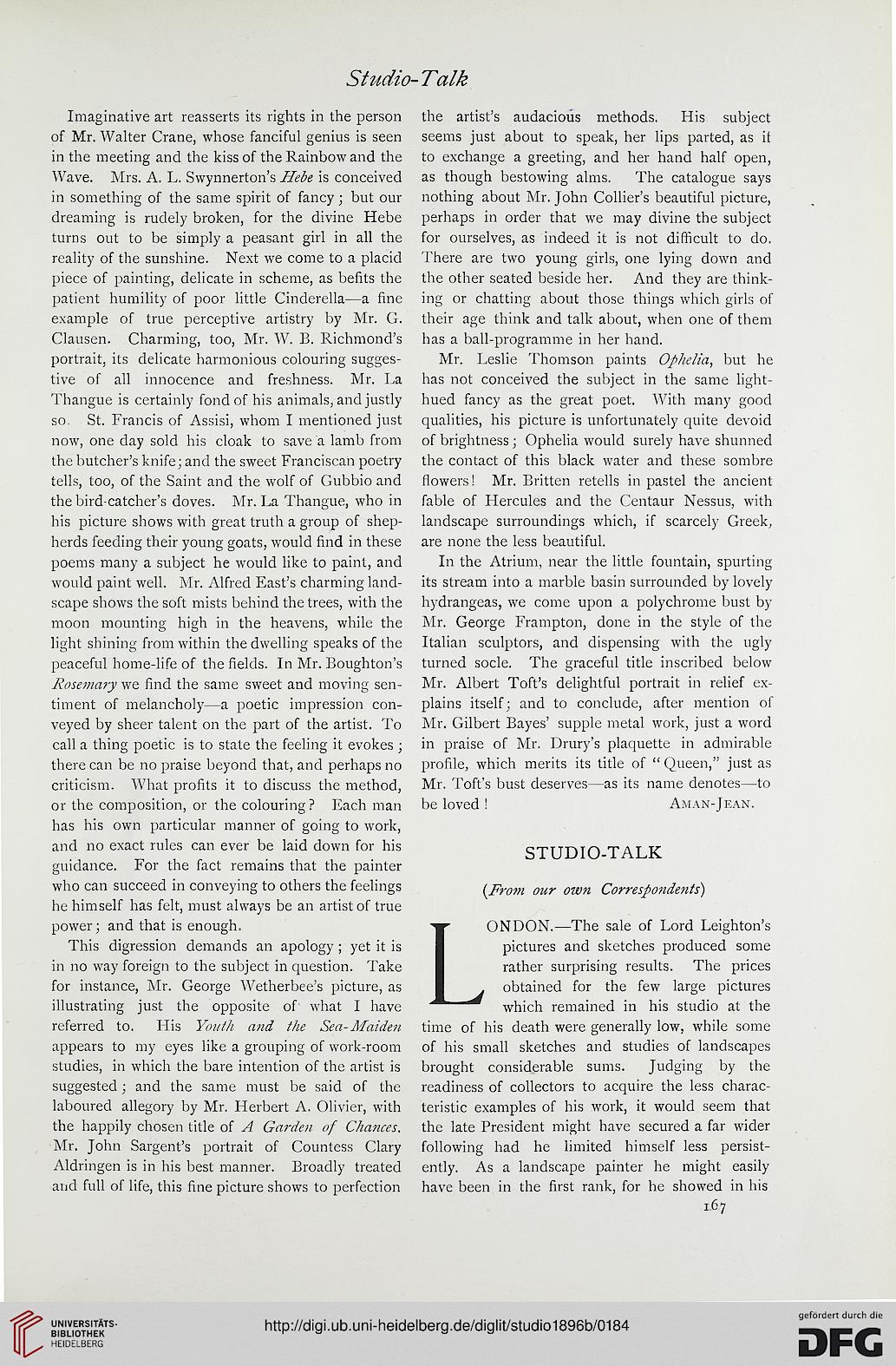 Imaginative art reasserts its rights in the person
of Mr. Walter Crane, whose fanciful genius is seen
in the meeting and the kiss of the Rainbow and the
Wave. Mrs. A. L. Swynnerton's Hebe is conceived
in something of the same spirit of fancy ; but our
dreaming is rudely broken, for the divine Hebe
turns out to be simply a peasant girl in all the
reality of the sunshine. Next we come to a placid
piece of painting, delicate in scheme, as befits the
patient humility of poor little Cinderella—a fine
example of true perceptive artistry by Mr. G.
Clausen. Charming, too, Mr. W. B. Richmond's
portrait, its delicate harmonious colouring sugges-
tive of all innocence and freshness. Mr. La
Thangue is certainly fond of his animals, and justly
so. St. Francis of Assisi, whom I mentioned just
now, one day sold his cloak to save a lamb from
the butcher's knife; and the sweet Franciscan poetry
tells, too, of the Saint and the wolf of Gubbio and
the bird-catcher's doves. Mr. La Thangue, who in
his picture shows with great truth a group of shep-
herds feeding their young goats, would find in these
poems many a subject he would like to paint, and
would paint well. Mr. Alfred East's charming land-
scape shows the soft mists behind the trees, with the
moon mounting high in the heavens, while the
light shining from within the dwelling speaks of the
peaceful home-life of the fields. In Mr. Boughton's
Rosemary we find the same sweet and moving sen-
timent of melancholy—a poetic impression con-
veyed by sheer talent on the part of the artist. To
call a thing poetic is to state the feeling it evokes ;
there can be no praise beyond that, and perhaps no
criticism. What profits it to discuss the method,
or the composition, or the colouring ? Each man
has his own particular manner of going to work,
and no exact rules can ever be laid down for his
guidance. For the fact remains that the painter
who can succeed in conveying to others the feelings
he himself has felt, must always be an artist of true
power; and that is enough.

This digression demands an apology ; yet it is
in no way foreign to the subject in question. Take
for instance, Mr. George Wetherbee's picture, as
illustrating just the opposite of what I have
referred to. His Youth atid the Sea-Maiden
appears to my eyes like a grouping of work-room
studies, in which the bare intention of the artist is
suggested; and the same must be said of the
laboured allegory by Mr. Herbert A. Olivier, with
the happily chosen title of A Garden of Chances.
Mr. John Sargent's portrait of Countess Clary
Aldringen is in his best manner. Broadly treated
and full of life, this fine picture shows to perfection

the artist's audacious methods. His subject
seems just about to speak, her lips parted, as if
to exchange a greeting, and her hand half open,
as though bestowing alms. The catalogue says
nothing about Mr. John Collier's beautiful picture,
perhaps in order that we may divine the subject
for ourselves, as indeed it is not difficult to do.
There are two young girls, one lying down and
the other seated beside her. And they are think-
ing or chatting about those things which girls of
their age think and talk about, when one of them
has a ball-programme in her hand.

Mr. Leslie Thomson paints Ophelia, but he
has not conceived the subject in the same light-
hued fancy as the great poet. With many good
qualities, his picture is unfortunately quite devoid
of brightness ; Ophelia would surely have shunned
the contact of this black water and these sombre
flowers! Mr. Britten retells in pastel the ancient
fable of Hercules and the Centaur Nessus, with
landscape surroundings which, if scarcely Greek,
are none the less beautiful.

In the Atrium, near the little fountain, spurting
its stream into a marble basin surrounded by lovely
hydrangeas, we come upon a polychrome bust by
Mr. George Frampton, done in the style of the
Italian sculptors, and dispensing with the ugly
turned socle. The graceful title inscribed below
Mr. Albert Toft's delightful portrait in relief ex-
plains itself; and to conclude, after mention of
Mr. Gilbert Bayes' supple metal work, just a word
in praise of Mr. Drury's plaquette in admirable
profile, which merits its title of " Queen," just as
Mr. Toft's bust deserves—as its name denotes—to
be loved ! Aman-Jean.

LONDON.—The sale of Lord Leighton's
pictures and sketches produced some
rather surprising results. The prices
obtained for the few large pictures
which remained in his studio at the
time of his death were generally low, while some
of his small sketches and studies of landscapes
brought considerable sums. Judging by the
readiness of collectors to acquire the less charac-
teristic examples of his work, it would seem that
the late President might have secured a far wider
following had he limited himself less persist-
ently. As a landscape painter he might easily
have been in the first rank, for he showed in his