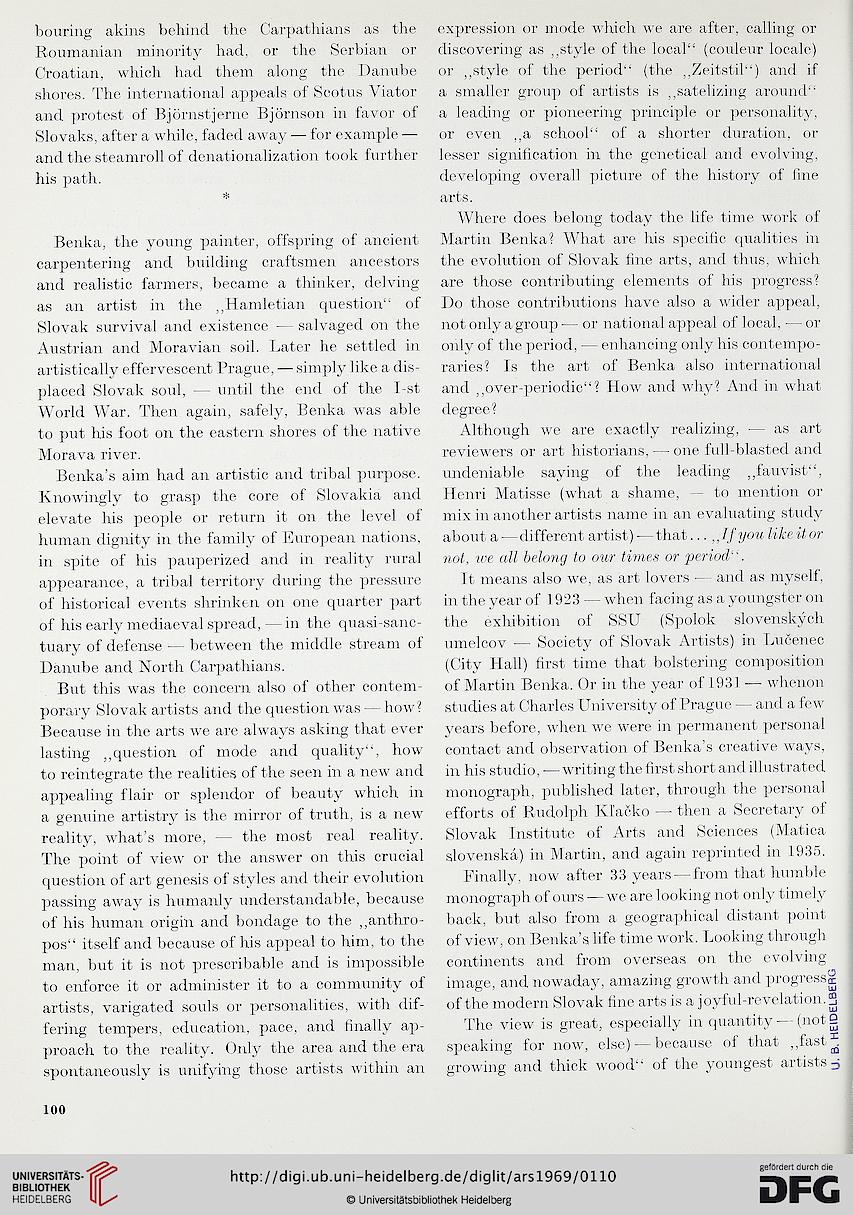 Information about OCR text
bouring akins behind the Carpathians as the
Roumanian minority had, or the Serbian or
Croatian, which had them aiong the Danube
shores. The internationai appeals of Scotus Viator
and protest of Björnstjerne Björnson in favor of
Slovaks, after a while, faded away — for example —
and the steamroll of denationalization took further
his path.
Benka, the young painter, offspring of ancient
carpentering and building craftsmen ancestors
and realistic farmers, became a thinker, delving
as an artist in the ,,Hamletian question" of
Slovák survival and existence — salvaged on the
Austrian and Moravian soil. Later he settled in
artistically effervescent Prague, — simply like a dis-
placed Slovák soul, — until the end of the I st
World War. Then again, safely, Benka was able
to put his foot on the eastern shores of the native
Morava river.
Benka's aim had an artistic and tribal purpose.
Knowingly to grasp the core of Slovakia and
elevate his people or ret.urn it on the level of
human dignity in the family of European nations,
in spite of his pauperized and in reality rural
appearance, a tribal territory during the pressure
of historical events shrinken on one quarter part
of his early mediaevalspread,—in the quasi-sanc-
tuary of defense — between the middle stream of
Danube and North Carpathians.
But tins was the concern also of other Contem-
porary Slovák artists and the question was — how?
Because in the arts we are always asking that ever
lasting ,, question of mode and quality", how
to reintegrate the realities of the seen in a new and
appealing flair or splendor of beauty which in
a genuine artistry is the mirror of truth, is a new
reality, what's more, — the most real reality.
The point of view or the answer on tins crucial
question of art genesis of styles and their évolution
passing away is humanly understandable, because
of his human origin and bondage to the ,,anthro-
pos" itself and because of his appeal to him, to the
man, but it is not prescribable and is impossible
to enforce it or administer it to a community of
artists, varigated souls or personalities, with dif-
fering tempers, éducation, páce, and hnally ap-
proach to the reality. Only the area and the era
spontaneously is unifying those artists within an

expression or mode which we are after, calling or
discovering as ,,style of the local" (couleur locale)
or ,,style of the period" (the ,,Zeitstil") and if
a smaller group of artists is ,,satelizing around"
a leading or pioneering principle or personality,
or even ,,a school" of a shorter duration, or
lesser signihcation in the genetical and evolving,
developing overall picture of the history of hne
arts.
Where does belong today the life time work of
Martin Benka? What are his specihc qualities in
the évolution of Slovák hne arts, and thus, which
are those contributing éléments of his progressé
Do those contributions hâve also a wider appeal,
not only a group — or national appeal of local. — or
only of the period, — enhancing only his contempo-
raries? Is the art of Benka also international
and ,,over-periodic"? How and why? And in what
degree?
Although we are exactly realizing, — as art
reviewers or art historians, — one full-blasted and
undeniable saying of the leading ,,fauvist",
Henri Matisse (what a shame, — to mention or
mix in another artists naine in an evaluating study
about a — different artist) -— that... , ,7/7/o% ^ or
7?od 7C6 uM &e^072y 07M* orpermd".
It means also we, as art lovers — and as myself,
in the year of 1923 — when facing as a youngster on
the exhibition of SSU (Spolok slovenských
umelcov — Society of Slovák Artists) in Lučenec
(City Hall) hrst time that bolstering composition
of Martin Benka. Or in the year of 1931 — whenon
studies at Charles University of Prague — and a few
years before, when we were in permanent personal
contact and observation of Benka's créative ways,
in his studio, — writing the hrst short and illustrated
monograph, published later, through the personal
efforts of Rudolph Ed'acko — then a Secret.ary of
Slovák Institute of Arts and Sciences (Matica
slovenská) in Martin, and again reprinted in 1935.
Finally, now after 33 years — from that humble
monograph of ours —we are looking not only timely
back, but also from a geographical distant point
of view, on Benka's life time work. Looking through
continents and from overseas on the evolving
image, and nowaday, amazing growth and progress
of the modem Slovák hne arts is a joyful-revelation.
The view is great, especially in quantity — (not
speaking for now, else) — because of that ,,fast
growing and thick wood" of the youngest artists