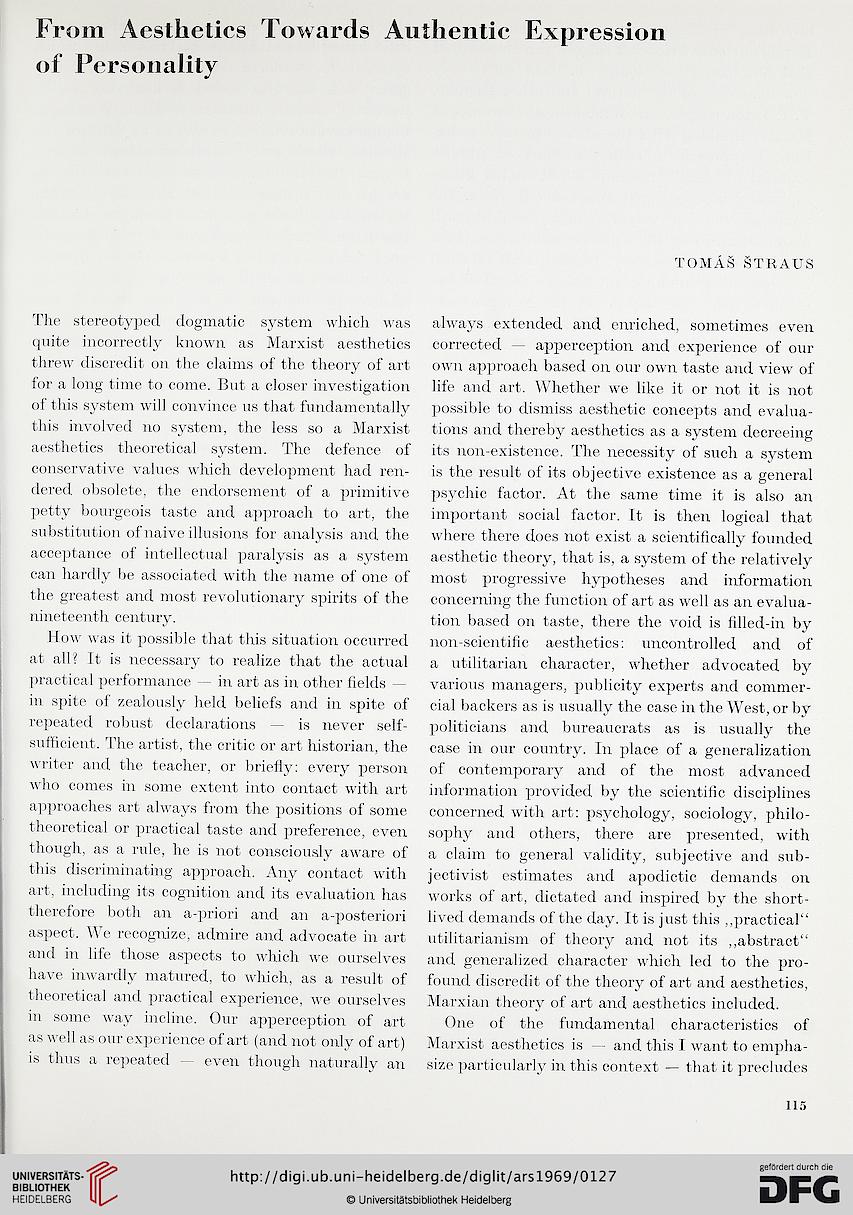 Information about OCR text
From Aesthetics Towards Authentic Expression
of Personality

The stéréotypée! dogmatic systém which was
quite incorrectly known as Marxist aesthetics
threw discrédit on the ciaims of the theory of art
for a long time to corne. But a doser investigation
of this systém will convince us that fundamentally
this involved no systém, the less so a Marxist
aesthetics theoretical systém. The defence of
conservative values which development had ren-
dered obsolete, the endossement of a primitive
pettv bourgeois taste and approach to art, the
substitution of naive illusions for analysis and the
acceptance of intellectual paralysis as a systém
can hardly be associated with the name of one of
the greatest and most revolutionary spirits of the
nineteenth Century.
How was it possible that this situation occurred
at ald It is necessary to realize that the actual
practical performance — in art as in other helds —
in spite of zealously held beliefs and in spite of
repeated robust déclarations — is never self-
suhicient. The artist, the critic or art historian, the
writer and the teacher, or briehy: every person
who cornes in some extent into contact with art
approaches art always from the positions of some
theoretical or practical taste and preference, even
though, as a rule, he is not consciously aware of
this discriminating approach. Any contact with
art, including its cognition and its évaluation has
therefore both an a-priori and an a-posteriori
aspect. We recognize, admire and advocate in art
and in life those aspects to which we ourselves
hâve inwardly matured, to which, as a resuit of
theoretical and practical expérience, we ourselves
in some way incline. Our apperception of art
as well as our expérience of art (and not only of art)
is thus a repeated — even though naturally an

always extended and enriched, sometimes even
corrected — apperception and expérience of our
own approach based on our own taste and view of
life and art. Whether we like it or not it is not
possible to dismiss aesthetic concepts and évalua-
tions and thereby aesthetics as a systém decreeing
its non-existence. The necessity of such a systém
is the resuit of its objective existence as a general
psychic factor. At the same time it is also an
important social factor. It is then logical that
where there does not exist a scientihcally founded
aesthetic theory, that is, a systém of the relatively
most progressive hypothèses and information
concerning the function of art as well as an évalua-
tion based on taste, there the void is hlled-in by
non-scientific aesthetics: uncontrolled and of
a utilitarian character, whether advocated by
varions managers, publicity experts and commer-
cial backers as is usually the case in the West, or by
politicians and bureaucrats as is usually the
case in our country. In place of a generalization
of contemporary and of the most advanced
information provided by the scientihc disciplines
concerned with art: psychology, sociology, philo-
sophy and others, there are presented, with
a claim to general validity, subjective and sub-
jectivist estimâtes and apodictic demands on
works of art, dictated and inspired by the short-
lived demands of the day. It is just this ,.practical"
utilitarianism of theory and not its ,,abstract"
and generalized character which led to the pro-
found discrédit of the theory of art and aesthetics,
Marxian theory of art and aesthetics included.
One of the fundamental characteristics of
Marxist aesthetics is — and this I want to empha-
size particularly in this context — that it precludes