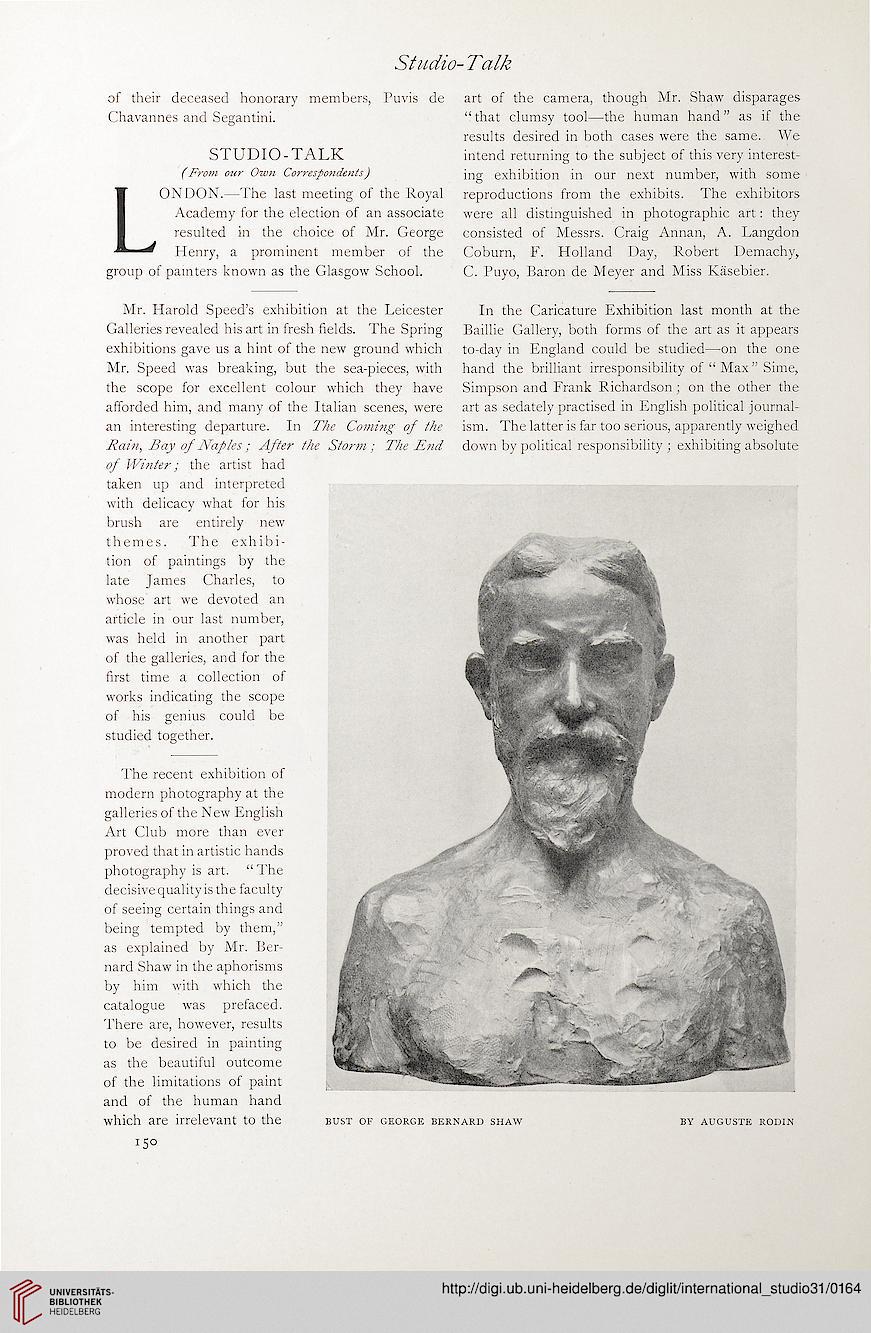 of their deceased honorary members, Puvis de
Chavannes and Segantini.
STUDIO-TALK
(From our Own Correspondents)
ON DON.—The last meeting of the Royal
Academy for the election of an associate
resulted in the choice of Mr. George
Henry, a prominent member of the
group of painters known as the Glasgow School.

Mr. Harold Speed’s exhibition at the Leicester
Galleries revealed his art in fresh fields. The Spring
exhibitions gave us a hint of the new ground which
Mr. Speed was breaking, but the sea-pieces, with
the scope for excellent colour which they have
afforded him, and many of the Italian scenes, were
an interesting departure. In The Coining of the
Rain, Bay of Naples ; After the Storm ; The End
of Winter; the artist had
taken up and interpreted
with delicacy what for his
brush are entirely new
themes. The exhibi-
tion of paintings by the
late James Charles, to
whose art we devoted an
article in our last number,
was held in another part
of the galleries, and for the
first time a collection of
works indicating the scope
of his genius could be
studied together.

The recent exhibition of
modern photography at the
galleries of the New English
Art Club more than ever
proved that in artistic hands
photography is art. “ The
decisive quality is the faculty
of seeing certain things and
being tempted by them,”
as explained by Mr. Ber-
nard Shaw in the aphorisms
by him with which the
catalogue was prefaced.
There are, however, results
to be desired in painting
as the beautiful outcome
of the limitations of paint
and of the human hand
which are irrelevant to the

art of the camera, though Mr. Shaw disparages
“that clumsy tool—the human hand” as if the
results desired in both cases were the same. We
intend returning to the subject of this very interest-
ing exhibition in our next number, with some
reproductions from the exhibits. The exhibitors
were all distinguished in photographic art: they
consisted of Messrs. Craig Annan, A. Langdon
Coburn, F. Holland Day, Robert Demachy,
C. Puyo, Baron de Meyer and Miss Kasebier.

In the Caricature Exhibition last month at the
Baillie Gallery, both forms of the art as it appears
to-day in England could be studied—on the one
hand the brilliant irresponsibility of “ Max ” Sime,
Simpson and Frank Richardson; on the other the
art as sedately practised in English political journal-
ism. The latter is far too serious, apparently weighed
down by political responsibility ; exhibiting absolute