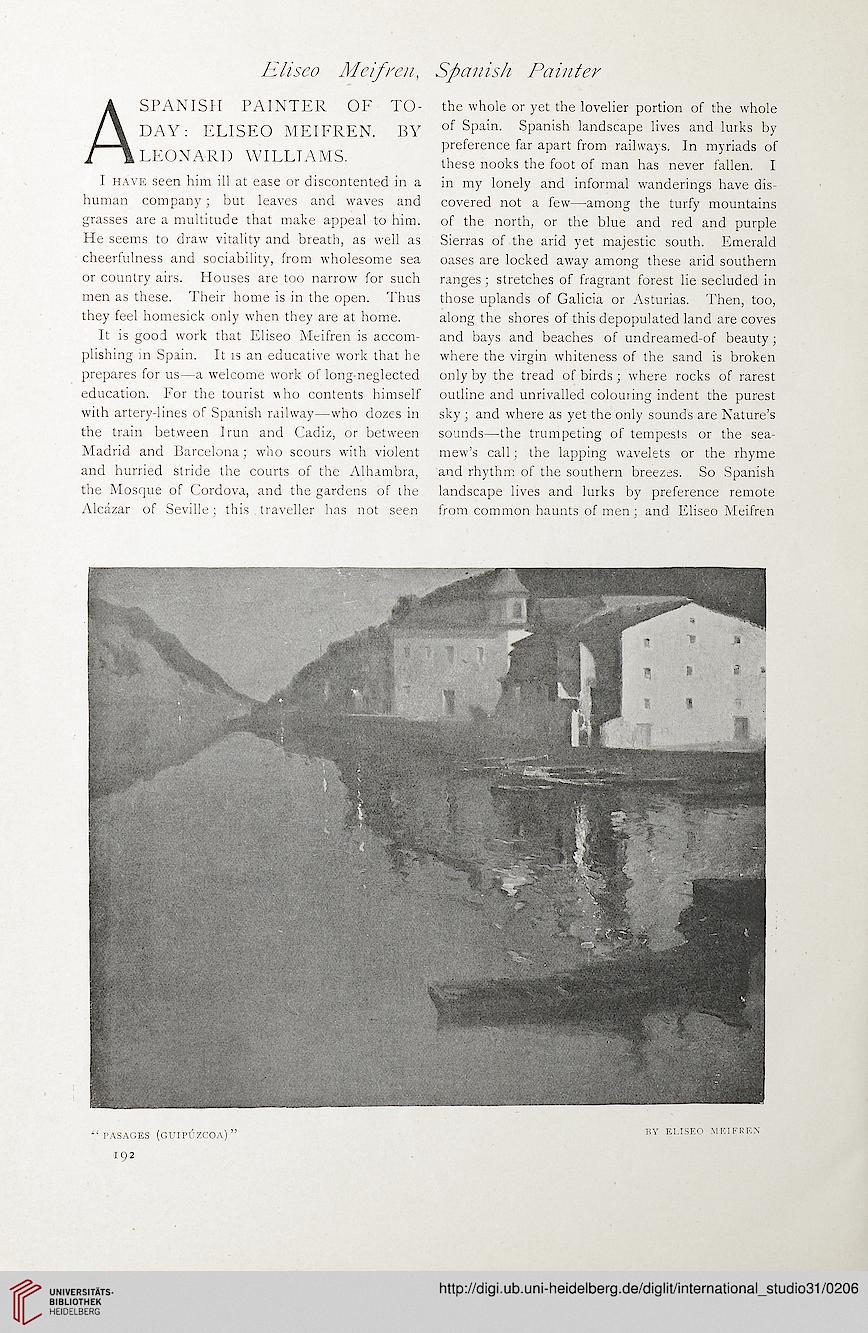 Information about OCR text
Elisco Meifren,
SPANISH PAINTER OF TO-
DAY: ELISEO MEIFREN. BY
LEONARD WILLIAMS.
I have seen him ill at ease or discontented in a
human company; but leaves and waves and
grasses are a multitude that make appeal to him.
He seems to draw vitality and breath, as well as
cheerfulness and sociability, from wholesome sea
or country airs. Houses are too narrow for such
men as these. Their home is in the open. Thus
they feel homesick only when they are at home.
It is good work that Eliseo Meifren is accom-
plishing in Spain. It is an educative work that he
prepares for us—a welcome work of long-neglected
education. For the tourist who contents himself
with artery-lines of Spanish railway—who dozes in
the train between Irun and Cadiz, or between
Madrid and Barcelona; who scours with violent
and hurried stride the courts of the Alhambra,
the Mosque of Cordova, and the gardens of the
Alcazar of Seville; this traveller has not seen

Spanish Painter
the whole or yet the lovelier portion of the whole
of Spain. Spanish landscape lives and lurks by
preference far apart from railways. In myriads of
these nooks the foot of man has never fallen. I
in my lonely and informal wanderings have dis-
covered not a few—among the turfy mountains
of the north, or the blue and red and purple
Sierras of the arid yet majestic south. Emerald
oases are locked away among these arid southern
ranges; stretches of fragrant forest lie secluded in
those uplands of Galicia or Asturias. Then, too,
along the shores of this depopulated land are coves
and bays and beaches of undreamed-of beauty;
where the virgin whiteness of the sand is broken
only by the tread of birds; where rocks of rarest
outline and unrivalled colouring indent the purest
sky ; and where as yet the only sounds are Nature’s
sounds—the trumpeting of tempests or the sea-
mew’s call; the lapping wavelets or the rhyme
and rhythm of the southern breezes. So Spanish
landscape lives and lurks by preference remote
from common haunts of men; and Eliseo Meifren