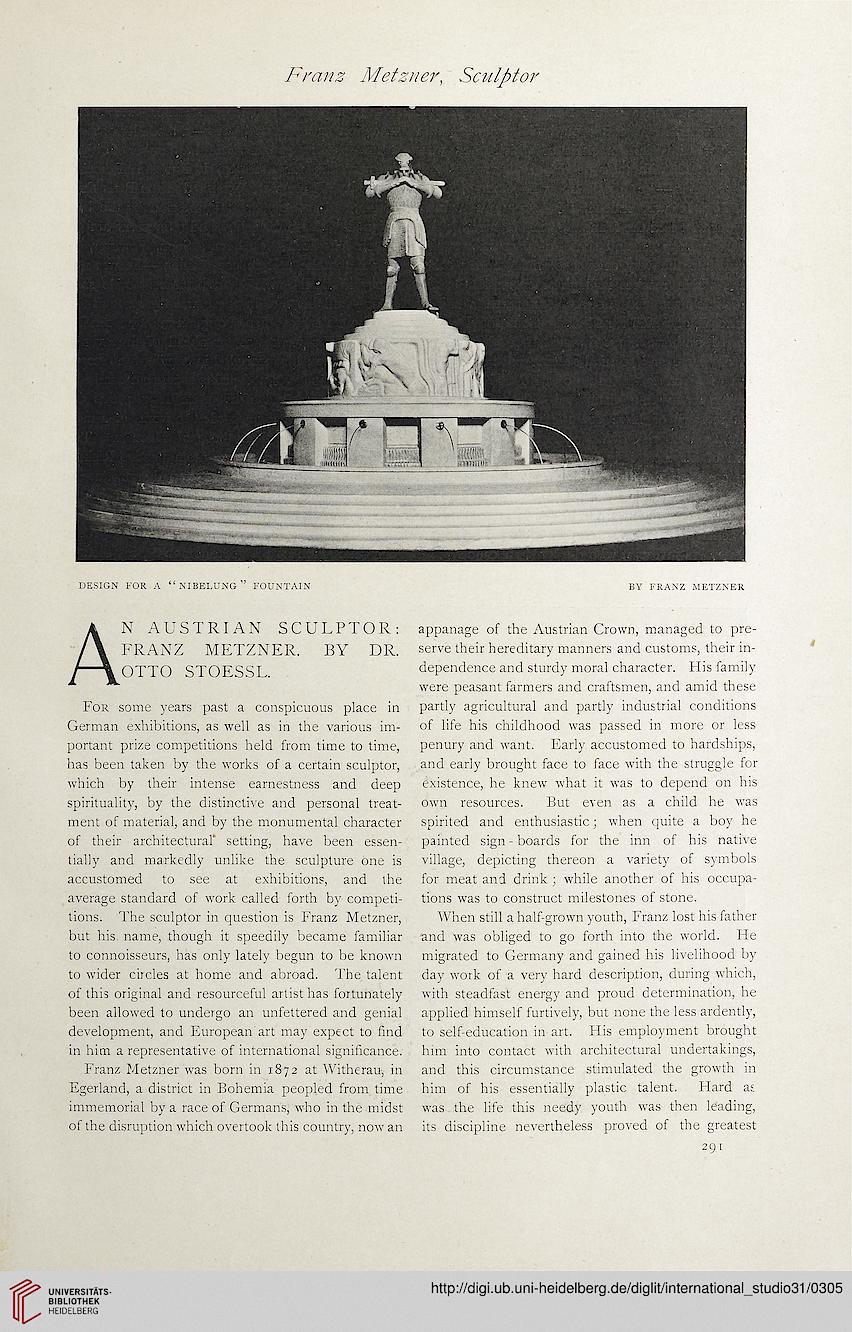 
DESIGN FOR A “NIBELUNG'’ FOUNTAIN BY FRANZ METZNER

AN AUSTRIAN SCULPTOR:
FRANZ METZNER. BY DR.
OTTO STOESSL.
For some years past a conspicuous place in
German exhibitions, as well as in the various im-
portant prize competitions held from time to time,
has been taken by the works of a certain sculptor,
which by their intense earnestness and deep
spirituality, by the distinctive and personal treat-
ment of material, and by the monumental character
of their architectural setting, have been essen-
tially and markedly unlike the sculpture one is
accustomed to see at exhibitions, and the
average standard of work called forth by competi-
tions. The sculptor in question is Franz Metzner,
but his name, though it speedily became familiar
to connoisseurs, has only lately begun to be known
to wider circles at home and abroad. The talent
of this original and resourceful artist has fortunately
been allowed to undergo an unfettered and genial
development, and European art may expect to find
in him a representative of international significance.
Franz Metzner was born in 1872 at Witherau, in
Egerland, a district in Bohemia peopled from time
immemorial by a race of Germans, who in the midst
of the disruption which overtook this country, now an

appanage of the Austrian Crown, managed to pre-
serve their hereditary manners and customs, their in-
dependence and sturdy moral character. His family
were peasant farmers and craftsmen, and amid these
partly agricultural and partly industrial conditions
of life his childhood was passed in more or less
penury and want. Early accustomed to hardships,
and early brought face to face with the struggle for
existence, he knew what it was to depend on his
own resources. But even as a child he was
spirited and enthusiastic; when quite a boy he
painted sign - boards for the inn of his native
village, depicting thereon a variety of symbols
for meat and drink ; while another of his occupa-
tions was to construct milestones of stone.
When still a half-grown youth, Franz lost his father
and was obliged to go forth into the world. He
migrated to Germany and gained his livelihood by
day work of a very hard description, during which,
with steadfast energy and proud determination, he
applied himself furtively, but none the less ardently,
to self-education in art. His employment brought
him into contact with architectural undertakings,
and this circumstance stimulated the growth in
him of his essentially plastic talent. Hard at
was the life this needy youth was then leading,
its discipline nevertheless proved of the greatest
291