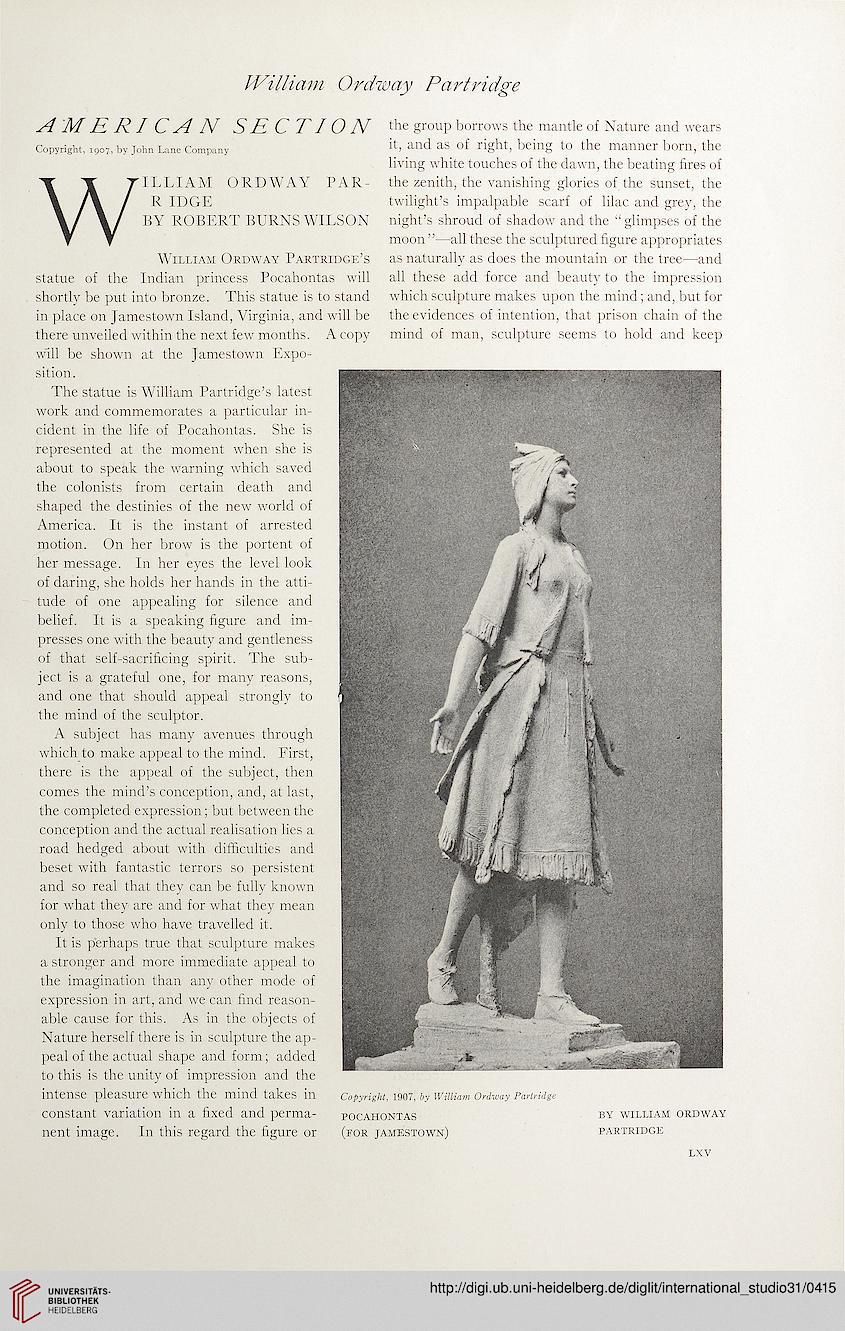 William Ordway Partridge’s
statue of the Indian princess Pocahontas will
shortly be put into bronze. This statue is to stand
in place on Jamestown Island, Virginia, and will be
there unveiled within the next few months. A copy
will be shown at the Jamestown Expo-
sition.
The statue is William Partridge’s latest
work and commemorates a particular in-
cident in the life of Pocahontas. She is
represented at the moment when she is
about to speak the warning which saved
the colonists from certain death and
shaped the destinies of the new world of
America. It is the instant of arrested
motion. On her brow is the portent of
her message. In her eyes the level look
of daring, she holds her hands in the atti-
tude of one appealing for silence and
belief. It is a speaking figure and im-
presses one with the beauty and gentleness
of that self-sacrificing spirit. The sub-
ject is a grateful one, for many reasons,
and one that should appeal strongly to
the mind of the sculptor.
A subject has many avenues through
which to make appeal to the mind. First,
there is the appeal of the subject, then
comes the mind’s conception, and, at last,
the completed expression; but between the
conception and the actual realisation lies a
road hedged about with difficulties and
beset with fantastic terrors so persistent
and so real that they can be fully known
for what they are and for what they mean
only to those who have travelled it.
It is perhaps true that sculpture makes
a stronger and more immediate appeal to
the imagination than any other mode of
expression in art, and we can find reason-
able cause for this. As in the objects of
Nature herself there is in sculpture the ap-
peal of the actual shape and form; added
to this is the unity of impression and the
intense pleasure which the mind takes in
constant variation in a fixed and perma-
nent image. In this regard the figure or

the group borrows the mantle of Nature and wears
it, and as of right, being to the manner born, the
living white touches of the dawn, the beating fires of
the zenith, the vanishing glories of the sunset, the
twilight’s impalpable scarf of lilac and grey, the
night’s shroud of shadow and the “ glimpses of the
moon ”—all these the sculptured figure appropriates
as naturally as does the mountain or the tree—and
all these add force and beauty to the impression
which sculpture makes upon the mind; and, but for
the evidences of intention, that prison chain of the
mind of man, sculpture seems to hold and keep