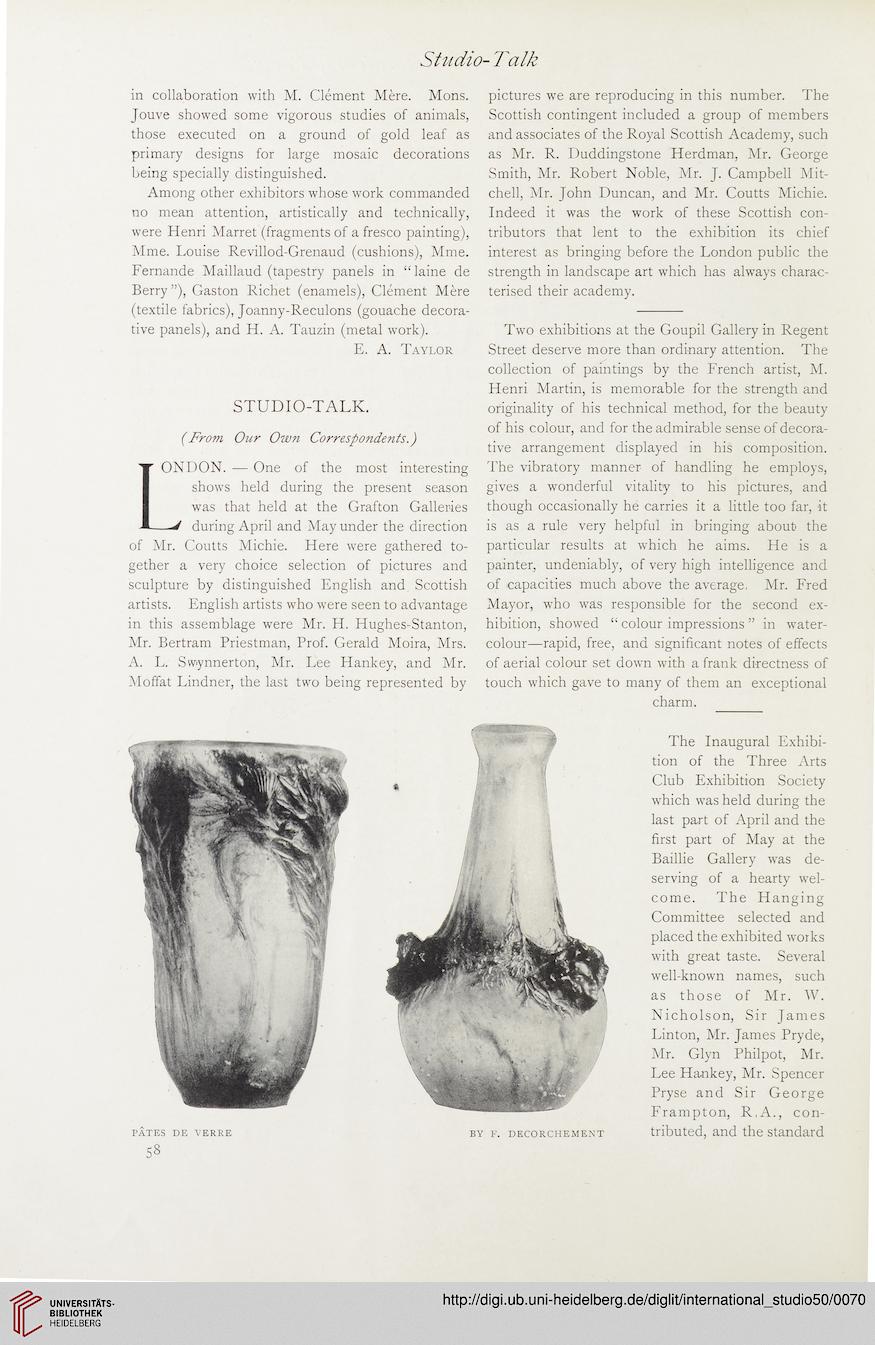 in collaboration with M. Clement Mere. Mons.
Jouve showed some vigorous studies of animals,
those executed on a ground of gold leaf as
primary designs for large mosaic decorations
being specially distinguished.
Among other exhibitors whose work commanded
no mean attention, artistically and technically,
were Henri Marret (fragments of a fresco painting),
Mme. Louise Revillod-Grenaud (cushions), Mme.
Fernande Maillaud (tapestry panels in “laine de
Berry ”), Gaston Richet (enamels), Clement Mere
(textile fabrics), Joanny-Reculons (gouache decora-
tive panels), and H. A. Tauzin (metal work).
E. A. Taylor
STUDIO-TALK.
(From Our Own Correspondents.)
LONDON. — One of the most interesting
shows held during the present season
was that held at the Grafton Galleries
—> during April and May under the direction
of Mr. Coutts Michie. Here were gathered to-
gether a very choice selection of pictures and
sculpture by distinguished English and Scottish
artists. English artists who were seen to advantage
in this assemblage were Mr. H. Hughes-Stanton,
Mr. Bertram Priestman, Prof. Gerald Moira, Mrs.
A. L. Swynnerton, Mr. Lee Hankey, and Mr.
Moffat Lindner, the last two being represented by

pictures we are reproducing in this number. The
Scottish contingent included a group of members
and associates of the Royal Scottish Academy, such
as Mr. R. Duddingstone Herdman, Mr. George
Smith, Mr. Robert Noble, Mr. J. Campbell Mit-
chell, Mr. John Duncan, and Mr. Coutts Michie.
Indeed it was the work of these Scottish con-
tributors that lent to the exhibition its chief
interest as bringing before the London public the
strength in landscape art which has always charac-
terised their academy.
Two exhibitions at the Goupil Gallery in Regent
Street deserve more than ordinary attention. The
collection of paintings by the French artist, M.
Henri Martin, is memorable for the strength and
originality of his technical method, for the beauty
of his colour, and for the admirable sense of decora-
tive arrangement displayed in his composition.
The vibratory manner of handling he employs,
gives a wonderful vitality to his pictures, and
though occasionally he carries it a little too far, it
is as a rule very helpful in bringing about the
particular results at which he aims. He is a
painter, undeniably, of very high intelligence and
of capacities much above the average, Mr. Fred
Mayor, who was responsible for the second ex-
hibition, showed “ colour impressions ” in water-
colour—rapid, free, and significant notes of effects
of aerial colour set down with a frank directness of
touch which gave to many of them an exceptional
charm.


The Inaugural Exhibi-
tion of the Three Arts
Club Exhibition Society
which was held during the
last part of April and the
first part of May at the
Baillie Gallery was de-
serving of a hearty wel-
come. The Hanging
Committee selected and
placed the exhibited works
with great taste. Several
well-known names, such
as those of Mr. W.
Nicholson, Sir James
Linton, Mr. James Pryde,
Mr. Glyn Philpot, Mr.
Lee Hankey, Mr. Spencer
Pryse and Sir George
Frampton, R,A., con-
tributed, and the standard