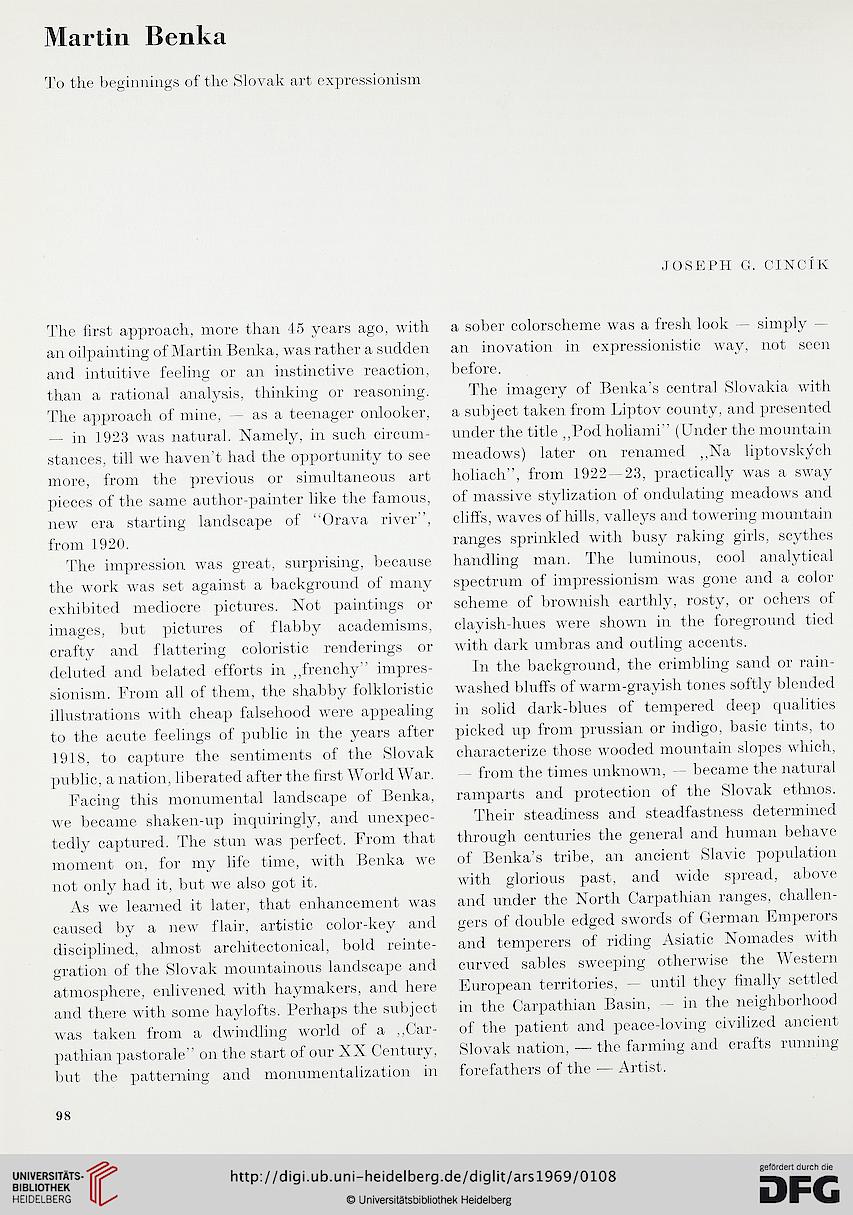 The hrst approach, more than 45 years ago, with
an oilpainting of Martin Benka, was rather a sndden
and intnitive feeling or an instinctive reaction,
than a rational analysis, thinking or reasoning.
Tire approach of mine, — as a teenager onlooker,
— in 1923 was natural. Námely, in such circum-
stances, tili we havenT had the opportunity to see
more, from the previous or simultaneous art
pièces of the same author-painter like the famous,
new era starting landscape of "Orava river",
from 1920.
The impression was great, surprising, because
the work was set against a background of many
exhibited mediocre pictures. Not paintings or
images, but pictures of flabby academisms,
crafty and flattering coloristic renderings or
deluted and belated efforts in ,,frenchy" impres-
sionism. From all of thern, the shabby folkloristic
illustrations with cheap falsehood were appealing
to the acute feelings of public in the years after
1918, to capture the sentiments of the Slovák
public, a nation, liberated after the hrst World War.
Facing this monumental landscape of Benka,
we became shaken-up inquiringly, and unexpec-
tedly captured. The stun was perfect. From that
moment on, for my life time, with Benka we
not only had it, but we also got it.
As we learned it later, that enhancement was
caused by a new flair, artistic color-key and
disciplined, almost architectonical, bold réinté-
gration of the Slovák mountainous landscape and
atmosphère, enlivened with haymakers, and here
and there with some haylofts. Perhaps the subject
was taken from a dwindling world of a ,,Car-
pathian pastorale" on the start of our XX Century,
but the patterning and monumentalization in

JOSEPH O. CINCÍK
a sober colorscheme was a fresh look — simply —
an inovation in expressionistic way, not seen
before.
The imagery of Benka's central Slovakia with
a subject taken from Liptov county, and presented
under the title ,,Pod holiami" (Under the mountain
meadows) later on renamed ,,Na liptovských
holiach", from 1922 — 23, practically was a sway
of massive stylization of ondulating meadows and
cliifs, waves of hills, valleys and towering mountain
ranges sprinkled with busy raking girls, scythes
handling man. The luminous, cool analytical
spectrum of impressionism was gone and a color
scheine of brownish earthly, rosty, or ochers of
clayish-hues were shown in the foreground tied
with dark umbras and outling accents.
In the background, the crimbling sand or rain-
washed bluifs of warm-grayish tones soft.ly blended
in solid dark-blues of tempered deep qualifies
picked up from prussian or indigo, basic tints, to
characterize those wooded mountain slopes which,
— from the times unknown, — became the natural
ramparts and protection of the Slovák ethnos.
Their steadiness and steadfastness determined
through centuries the general and human behave
of Benka's tribe, an ancient Slavic population
with glorious past, and wide spread, above
and under the North Oarpathian ranges, challen-
gers of double edged swords of German Emperors
and temperers of riding Asiatic Nomades with
curved sables sweeping otherwise the Western
European territories, — until they ßnally settled
in the Oarpathian Basin, — in the neighborhood
of the patient and peace-loving civilized ancient
Slovák nation, — the farming and crafts running
forefathers of the — Artist.