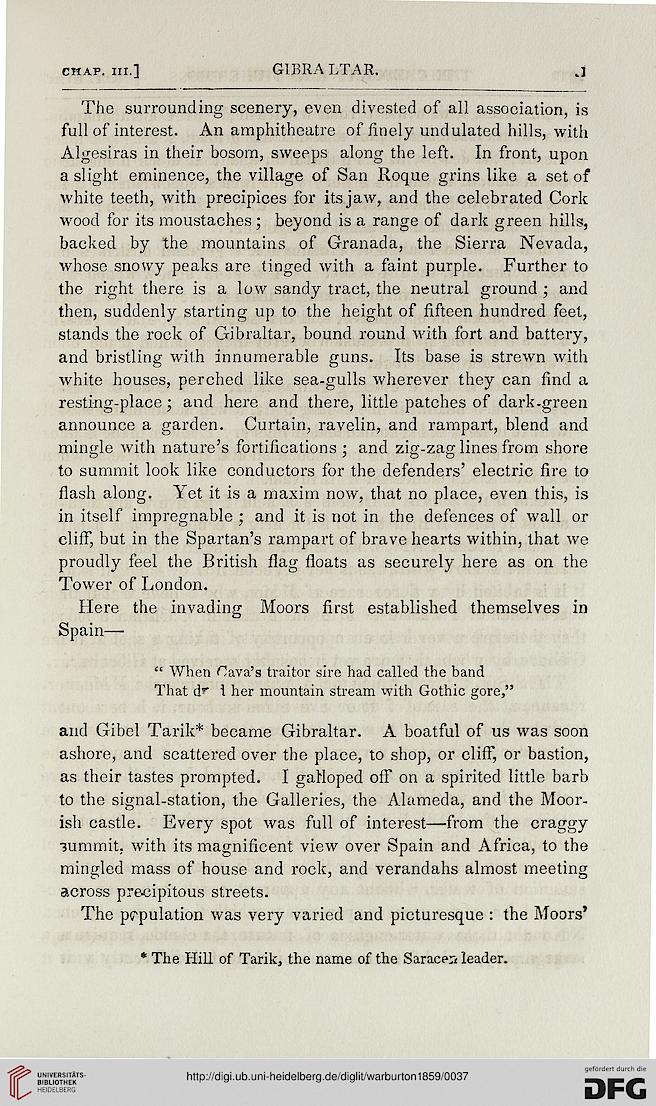 The surrounding scenery, even divested of all association, is
full of interest. An amphitheatre of finely undulated hills, with
Algesiras in their bosom, sweeps along the left. In front, upon
a slight eminence, the village of San Roque grins like a set of
white teeth, with precipices for its jaw, and the celebrated Cork
wood for its moustaches ; beyond is a range of dark green hills,
backed by the mountains of Granada, the Sierra Nevada,
whose snowy peaks are tinged with a faint purple. Further to
the right there is a low sandy tract, the neutral ground ; and
then, suddenly starting up to the height of fifteen hundred feet,
stands the rock of Gibraltar, bound round with fort and battery,
and bristling with innumerable guns. Its base is strewn with
white houses, perched like sea-gulls wherever they can find a
resting-place ; and here and there, little patches of dark-green
announce a garden. Curtain, ravelin, and rampart, blend and
mingle with nature's fortifications : and zig-zag; lines from shore
to summit look like conductors for the defenders' electric fire to
flash along. Yet it is a maxim now, that no place, even this, is
in itself impregnable ; and it is not in the defences of wall or
cliff, but in the Spartan's rampart of brave hearts within, that we
proudly feel the British flag floats as securely here as on the
Tower of London.

Here the invading Moors first established themselves in
Spain—

" When lava's traitor sire had called the band
That d1" i her mountain stream with Gothic gore,"

and Gibel Tarik* became Gibraltar. A boatful of us was soon
ashore, and scattered over the place, to shop, or cliff, or bastion,
as their tastes prompted. I gaHoped off on a spirited little barb
to the signal-station, the Galleries, the Alameda, and the Moor-
ish castle. Every spot was full of interest—from the craggy
lummit, with its magnificent view over Spain and Africa, to the
mingled mass of house and rock, and verandahs almost meeting
across precipitous streets.

The population was very varied and picturesque : the Moors'

* The Hill of Tarik, the name of the Saracen leader.