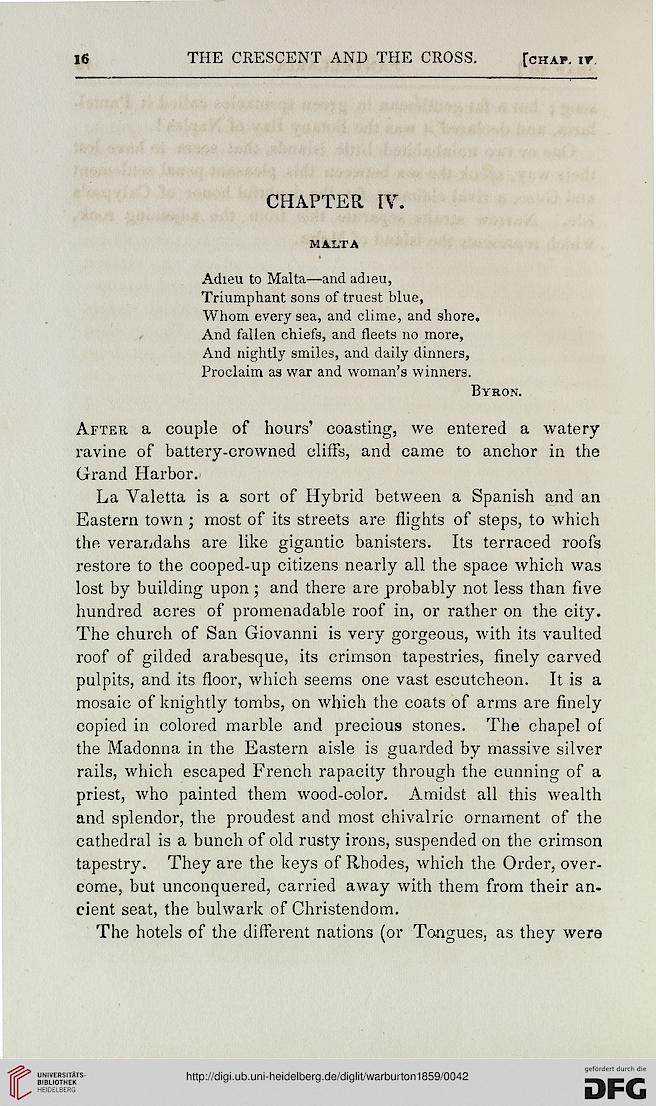 Adieu to Malta—and adieu,
Triumphant sons of truest blue,
Whom every sea, and clime, and shore.
And fallen chiefs, and fleets no more,
And nightly smiles, and daily dinners,
Proclaim as war and woman's winners.

After a couple of hours' coasting, we entered a watery
ravine of battery-crowned cliffs, and came to anchor in the
Grand Harbor.

La Valetta is a sort of Hybrid between a Spanish and an
Eastern town ; most of its streets are flights of steps, to which
the verandahs are like gigantic banisters. Its terraced roofs
restore to the cooped-up citizens nearly all the space which was
lost by building upon; and there are probably not less than five
hundred acres of promenadable roof in, or rather on the city.
The church of San Giovanni is very gorgeous, with its vaulted
roof of gilded arabesque, its crimson tapestries, finely carved
pulpits, and its floor, which seems one vast escutcheon. It is a
mosaic of knightly tombs, on which the coats of arms are finely
copied in colored marble and precious stones. The chapel of
the Madonna in the Eastern aisle is guarded by massive silver
rails, which escaped French rapacity through the cunning of a
priest, who painted them wood-color. Amidst all this wealth
and splendor, the proudest and most chivalric ornament of the
cathedral is a bunch of old rusty irons, suspended on the crimson
tapestry. They are the keys of Rhodes, which the Order, over-
come, but unconquered, carried away with them from their an-
cient seat, the bulwark of Christendom.

The hotels of the different nations (or Tongues, as they were