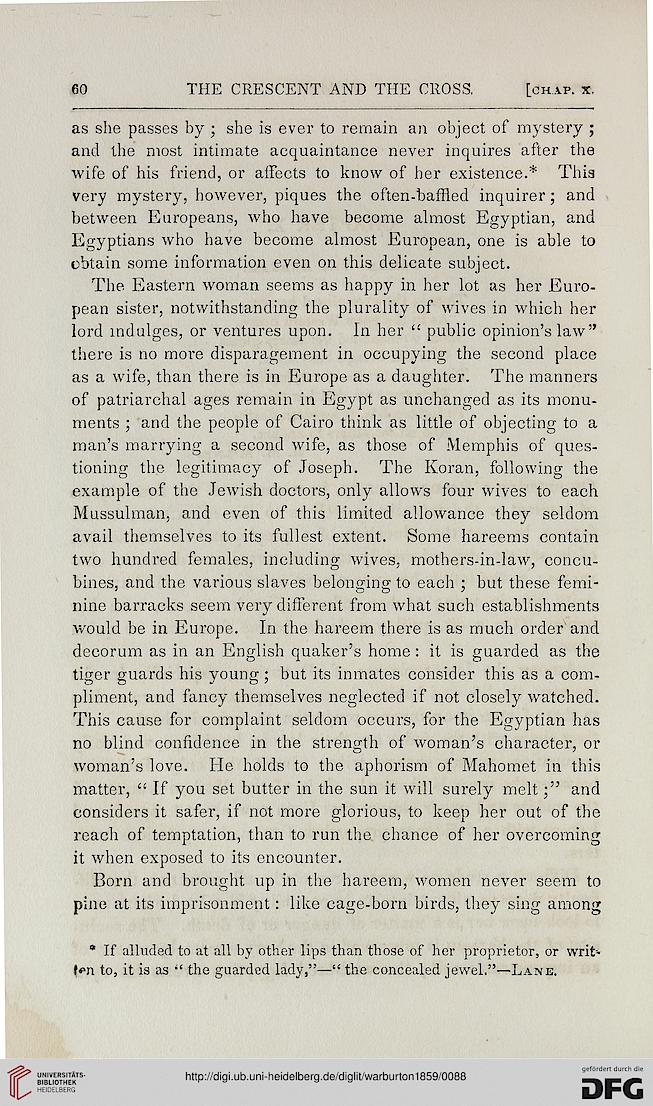 as she passes by ; she is ever to remain an object of mystery ;
and the most intimate acquaintance never inquires after the
wife of his friend, or affects to know of her existence.* This
very mystery, however, piques the often-baffled inquirer; and
between Europeans, who have become almost Egyptian, and
Egyptians who have become almost European, one is able to
obtain some information even on this delicate subject.

The. Eastern woman seems as happy in her lot as her Euro-
pean sister, notwithstanding the plurality of wives in which her
lord indulges, or ventures upon. In her " public opinion's law"
there is no more disparagement in occupying the second place
as a wife, than there is in Europe as a daughter. The manners
of patriarchal ages remain in Egypt as unchanged as its monu-
ments j and the people of Cairo think as little of objecting to a
man's marrying a second wife, as those of Memphis of ques-
tioning the legitimacy of Joseph. The Koran, following the
example of the Jewish doctors, only allows four wives to each
Mussulman, and even of this limited allowance they seldom
avail themselves to its fullest extent. Some hareems contain
two hundred females, including wives, mothers-in-law, concu-
bines, and the various slaves belonging to each ; but these femi-
nine barracks seem very different from what such establishments
would be in Europe. In the hareem there is as much order and
decorum as in an English quaker's home : it is guarded as the
tiger guards his young ; but its inmates consider this as a com-
pliment, and fancy themselves neglected if not closely watched.
This cause for complaint seldom occurs, for the Egyptian has
no blind confidence in the strength of woman's character, or
woman's love. He holds to the aphorism of Mahomet in this
matter, " If you set butter in the sun it will surely melt ;" and
considers it safer, if not more glorious, to keep her out of the
reach of temptation, than to run the chance of her overcoming
it when exposed to its encounter.

Born and brought up in the hareem, women never seem to
pine at its imprisonment: like cage-born birds, they sing among

* If alluded to at all by other lips than those of her proprietor, or writ*
f*>n to, it is as " the guarded lady,"—" the concealed jewel."—Lane.