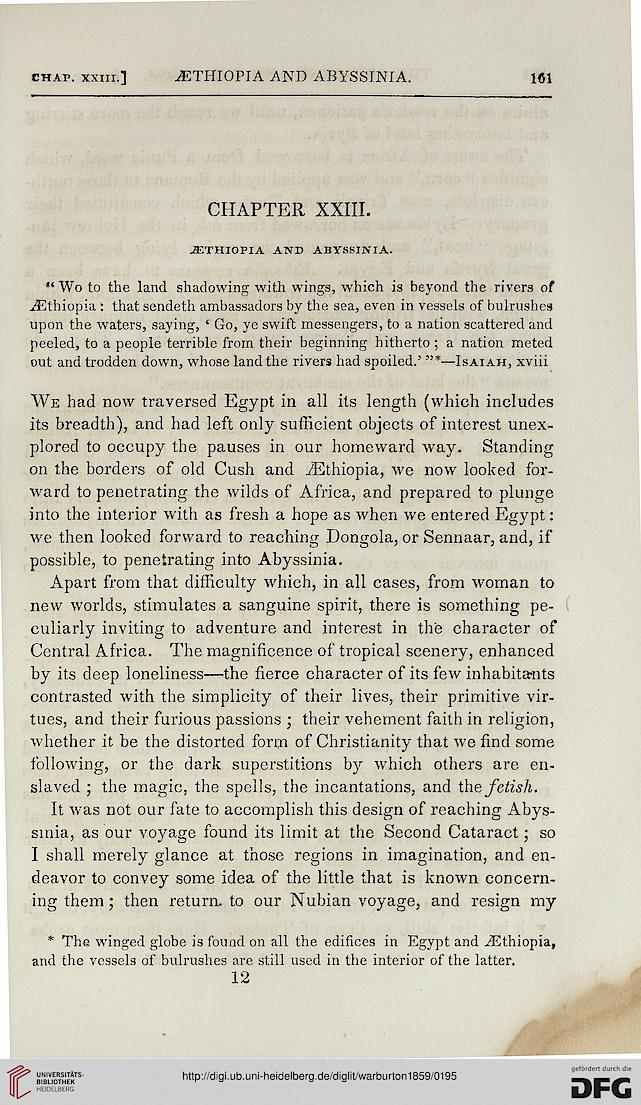 " Wo to the land shadowing with wings, which is beyond the rivers of
^Ethiopia : that sendeth ambassadors by the sea, even in vessels of bulrushes
upon the waters, saying, ' Go, ye swift messengers, to a nation scattered and
peeled, to a people terrible from their beginning hitherto ; a nation meted
out and trodden down, whose land the rivers had spoiled.' "*—Isaiah, xviii

We had now traversed Egypt in all its length (which includes
its breadth), and had left only sufficient objects of interest unex-
plored to occupy the pauses in our homeward way. Standing
on the borders of old Cush and ./Ethiopia, we now looked for-
ward to penetrating the wilds of Africa, and prepared to plunge
into the interior with as fresh a hope as when we entered Egypt:
we then looked forward to reaching Dongola, or Sennaar, and, if
possible, to penetrating into Abyssinia.

Apart from that difficulty which, in all cases, from woman to
new worlds, stimulates a sanguine spirit, there is something pe-
culiarly inviting to adventure and interest in the character of
Central Africa. The magnificence of tropical scenery, enhanced
by its deep loneliness—the fierce character of its few inhabitants
contrasted with the simplicity of their lives, their primitive vir-
tues, and their furious passions ; their vehement faith in religion,
whether it be the distorted form of Christianity that we find some
following, or the dark superstitions by which others are en-
slaved ; the magic, the spells, the incantations, and the fetish.

It was not our fate to accomplish this design of reaching Abys-
sinia, as our voyage found its limit at the Second Cataract; so
I shall merely glance at those regions in imagination, and en-
deavor to convey some idea of the little that is known concern-
ing them; then return, to our Nubian voyage, and resign my

* The winged globe is found on all the edifices in Egypt and ^Ethiopia,
and the vessels of bulrushes are still used in the interior of the latter,