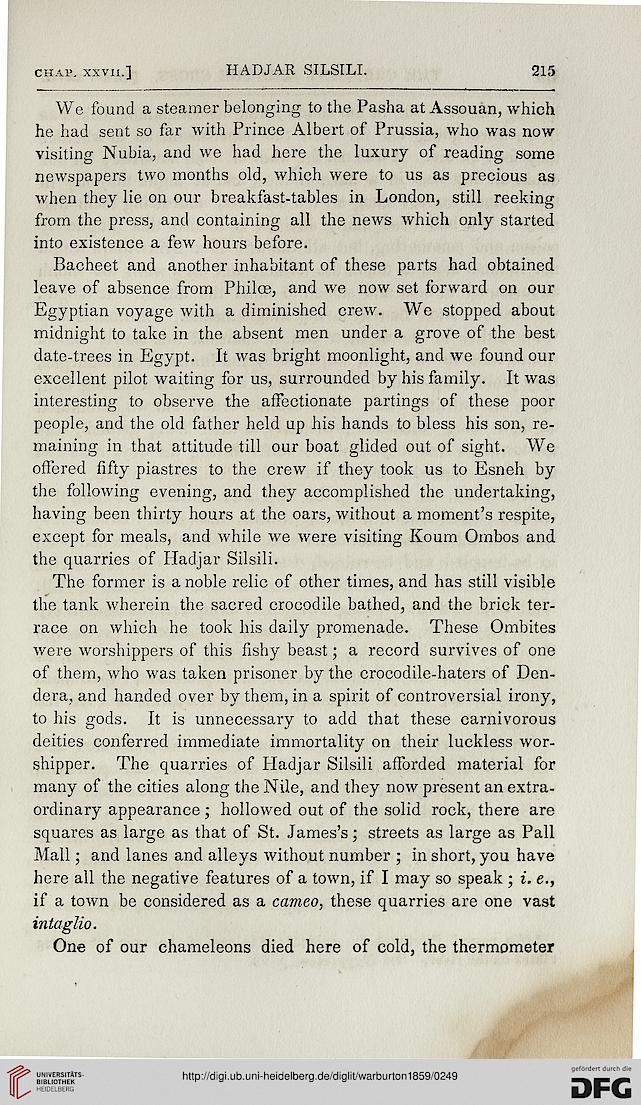 We found a steamer belonging to the Pasha at Assouan, which
he had sent so far with Prince Albert of Prussia, who was now
visiting Nubia, and we had here the luxury of reading some
newspapers two months old, which were to us as precious as
when they lie on our breakfast-tables in London, still reeking
from the press, and containing all the news which only started
into existence a few hours before.

Bacheet and another inhabitant of these parts had obtained
leave of absence from Philce, and we now set forward on our
Egyptian voyage with a diminished crew. We stopped about
midnight to take in the absent men under a grove of the best
date-trees in Egypt. It was bright moonlight, and we found our
excellent pilot waiting for us, surrounded by his family. It was
interesting to observe the affectionate partings of these poor
people, and the old father held up his hands to bless his son, re-
maining in that attitude till our boat glided out of sight. We
offered fifty piastres to the crew if they took us to Esneh by
the following evening, and they accomplished the undertaking,
having been thirty hours at the oars, without a moment's respite,
except for meals, and while we were visiting Koum Ombos and
the quarries of Hadjar Silsili.

The former is a noble relic of other times, and has still visible
the tank wherein the sacred crocodile bathed, and the brick ter-
race on which he took his daily promenade. These Ombites
were worshippers of this fishy beast; a record survives of one
of them, who was taken prisoner by the crocodile-haters of Den-
dera, and handed over by them, in a spirit of controversial irony,
to his gods. It is unnecessary to add that these carnivorous
deities conferred immediate immortality on their luckless wor-
shipper. The quarries of Hadjar Silsili afforded material for
many of the cities along the Nile, and they now present an extra-
ordinary appearance; hollowed out of the solid rock, there are
squares as large as that of St. James's; streets as large as Pall
Mall; and lanes and alleys without number ; in short, you have
here all the negative features of a town, if I may so speak ; i. e.,
if a town be considered as a cameo, these quarries are one vast
intaglio.

One of our chameleons died here of cold, the thermometer