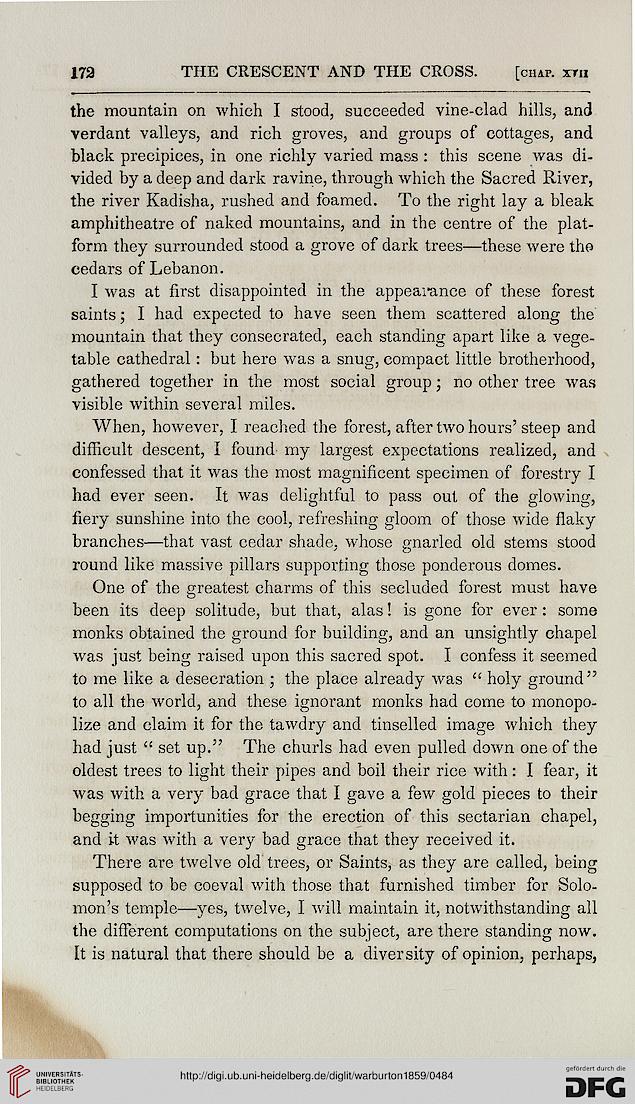 the mountain on which I stood, succeeded vine-clad hills, and
verdant valleys, and rich groves, and groups of cottages, and
black precipices, in one richly varied mass : this scene was di-
vided by a deep and dark ravine, through which the Sacred River,
the river Kadisha, rushed and foamed. To the right lay a bleak
amphitheatre of naked mountains, and in the centre of the plat-
form they surrounded stood a grove of dark trees—these were the
cedars of Lebanon.

I was at first disappointed in the appeai-ance of these forest
saints; I had expected to have seen them scattered along the
mountain that they consecrated, each standing apart like a vege-
table cathedral : but hero was a snug, compact little brotherhood,
gathered together in the most social group; no other tree was
visible within several miles.

When, however, I reached the forest, after two hours' steep and
difficult descent, I found my largest expectations realized, and
confessed that it was the most magnificent specimen of forestry I
had ever seen. It was delightful to pass out of the glowing,
fiery sunshine into the cool, refreshing gloom of those wide flaky
branches—that vast cedar shade, whose gnarled old stems stood
round like massive pillars supporting those ponderous domes.

One of the greatest charms of this secluded forest must have
been its deep solitude, but that, alas! is gone for ever : some
monks obtained the ground for building, and an unsightly chapel
was just being raised upon this sacred spot. I confess it seemed
to me like a desecration ; the place already was " holy ground"
to all the world, and these ignorant monks had come to monopo-
lize and claim it for the tawdry and tinselled image which they
had just " set up." The churls had even pulled down one of the
oldest trees to light their pipes and boil their rice with: I fear, it
was with a very bad grace that I gave a few gold pieces to their
begging importunities for the erection of this sectarian chapel,
and it was with a very bad grace that they received it.

There are twelve old trees, or Saints, as they are called, being
supposed to be coeval with those that furnished timber for Solo-
mon's temple—yes, twelve, I will maintain it, notwithstanding all
the different computations on the subject, are there standing now.
It is natural that there should be a diversity of opinion, perhaps,