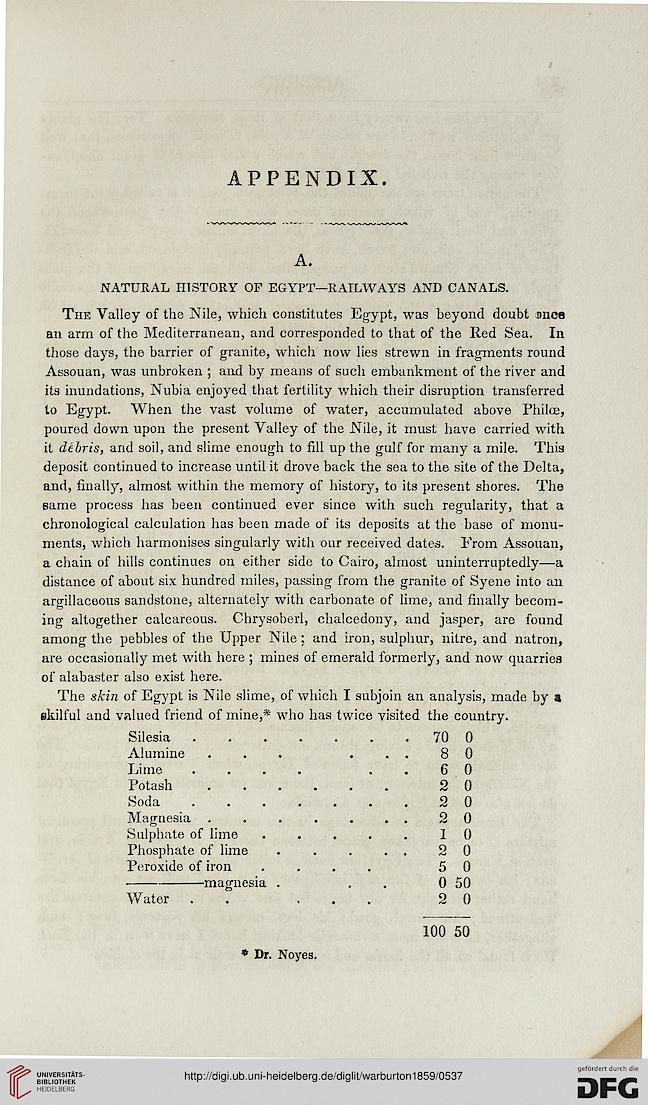 NATURAL HISTORY OF EGYPT—RAILWAYS AND CANALS.

The Valley of the Nile, which constitutes Egypt, was beyond doubt snce
an arm of the Mediterranean, and corresponded to that of the Red Sea. In
those days, the barrier of granite, which now lies strewn in fragments round
Assouan, was unbroken ; and by means of such embankment of the river and
its inundations, Nubia enjoyed that fertility which their disruption transferred
to Egypt. When the vast volume of water, accumulated above Philae,
poured down upon the present Valley of the Nile, it must have carried with
it debris, and soil, and slime enough to fill up the gulf for many a mile. This
deposit continued to increase until it drove back the sea to the site of the Delta,
and, finally, almost within the memory of history, to its present shores. The
same process has been continued ever since with such regularity, that a
chronological calculation has been made of its deposits at the base of monu-
ments, which harmonises singularly with our received dates. From Assouan,
a chain of hills continues on either side to Cairo, almost uninterruptedly—a
distance of about six hundred miles, passing from the granite of Syene into an
argillaceous sandstone, alternately with carbonate of lime, and finally becom-
ing altogether calcareous. Chrysoberl, chalcedony, and jasper, are found
among the pebbles of the Upper Nile ; and iron, sulphur, nitre, and natron,
are occasionally met with here ; mines of emerald formerly, and now quarries
of alabaster also exist here.

The skin of Egypt is Nile slime, of which I subjoin an analysis, made by a
skilful and valued friend of mine,* who has twice visited the country.