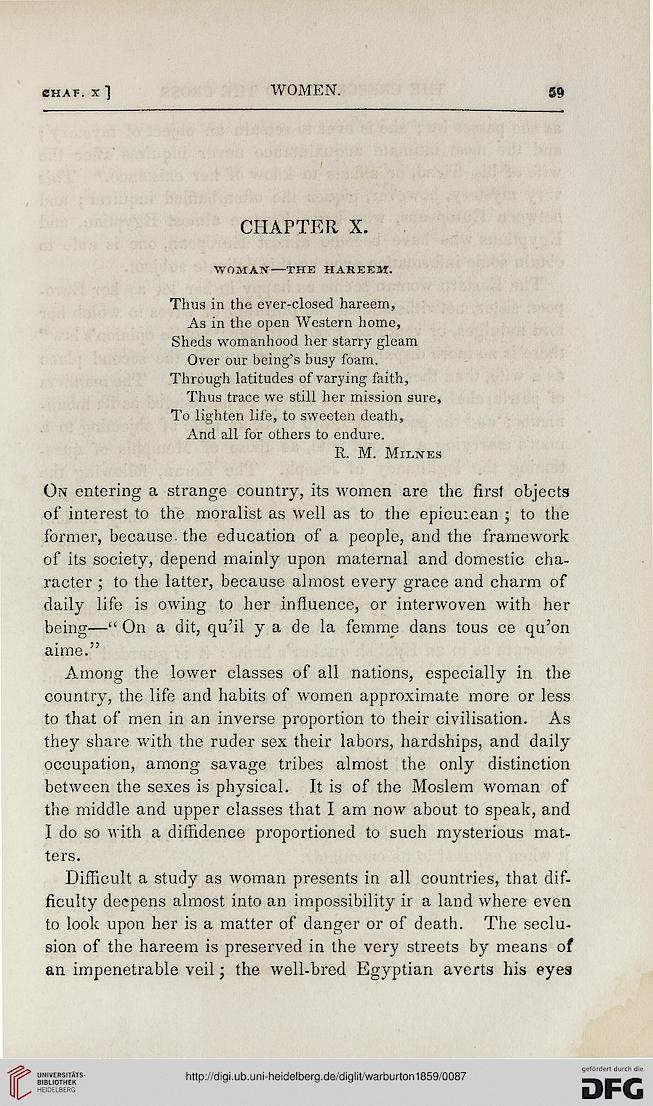 Thus in the ever-closed hareem,

As in the open Western home,
Sheds womanhood her starry gleam

Over our being's busy foam.
Through latitudes of varying faith,

Thus trace we still her mission sure,
To lighten life, to sweeten death,

And all for others to endure.

On entering a strange country, its women are the first objects
of interest to the moralist as well as to the epicuiean ; to the
former, because, the education of a people, and the framework
of its society, depend mainly upon maternal and domestic cha-
racter ; to the latter, because almost every grace and charm of
daily life is owing to her influence, or interwoven with her
being—" On a dit, qu'il y a de la femme dans tous ce qu'on
aime."

Among the lower classes of all nations, especially in the
country, the life and habits of women approximate more or less
to that of men in an inverse proportion to their civilisation. As
they share with the ruder sex their labors, hardships, and daily
occupation, among savage tribes almost the only distinction
between the sexes is physical. It is of the Moslem woman of
the middle and upper classes that I am now about to speak, and
I do so with a diffidence proportioned to such mysterious mat-
ters.

Difficult a study as woman presents in all countries, that dif-
ficulty deepens almost into an impossibility ir a land where even
to look upon her is a matter of danger or of death. The seclu-
sion of the hareem is preserved in the very streets by means of
an impenetrable veil; the well-bred Egyptian averts his eyea