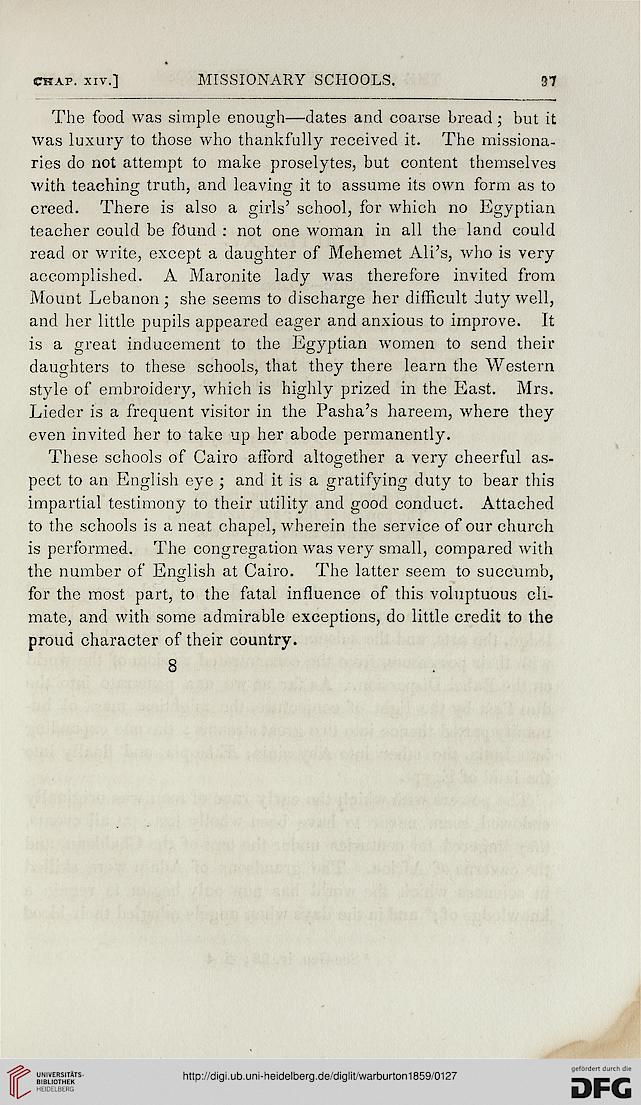 The food was simple enough—dates and coarse bread; but it
was luxury to those who thankfully received it. The missiona-
ries do not attempt to make proselytes, but content themselves
with teaching truth, and leaving it to assume its own form as to
creed. There is also a girls' school, for which no Egyptian
teacher could be fdund : not one woman in all the land could
read or write, except a daughter of Mehemet Ali's, who is very
accomplished. A Maronite lady was therefore invited from
Mount Lebanon; she seems to discharge her difficult duty well,
and her little pupils appeared eager and anxious to improve. It
is a great inducement to the Egyptian women to send their
daughters to these schools, that they there learn the Western
style of embroidery, which is highly prized in the East. Mrs.
Lieder is a frequent visitor in the Pasha's hareem, where they
even invited her to take up her abode permanently.

These schools of Cairo afford altogether a very cheerful as-
pect to an English eye ; and it is a gratifying duty to bear this
impartial testimony to their utility and good conduct. Attached
to the schools is a neat chapel, wherein the service of our church
is performed. The congregation was very small, compared with
the number of English at Cairo. The latter seem to succumb,
for the most part, to the fatal influence of this voluptuous cli-
mate, and with some admirable exceptions, do little credit to the
proud character of their country.
8