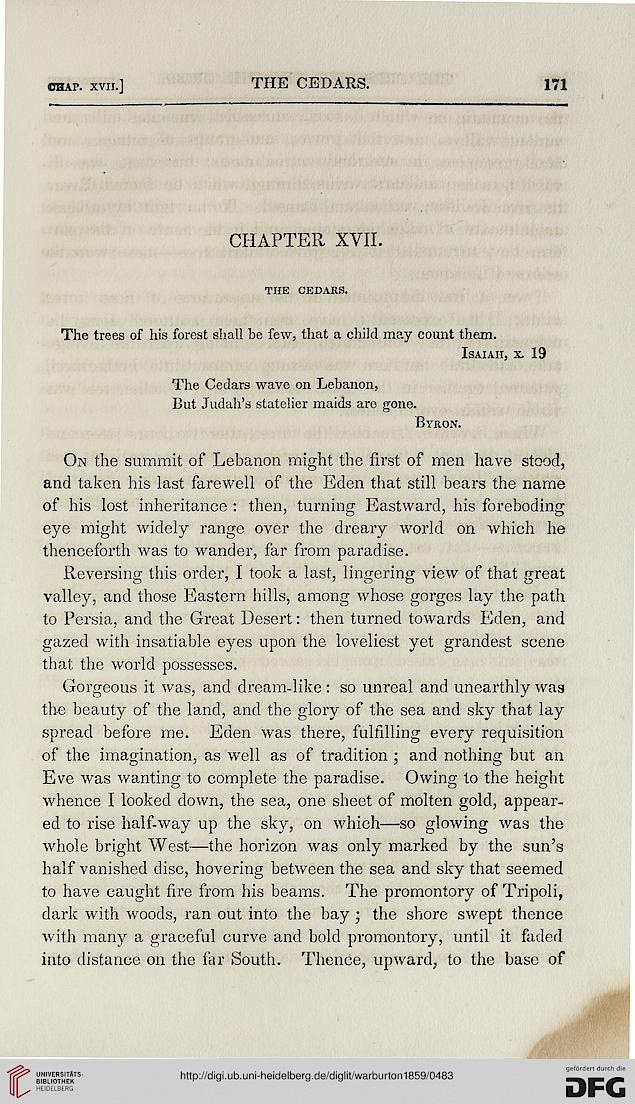 The trees of his forest shall be few, that a child may count them.

The Cedars wave on Lebanon,

But Judah's statelier maids are gone.

On the summit of Lebanon might the first of men have stood,
and taken his last farewell of the Eden that still bears the name
of his lost inheritance : then, turning Eastward, his foreboding
eye might widely range over the dreary world on which he
thenceforth was to wander, far from paradise.

Reversing this order, I took a last, lingering view of that great
valley, and those Eastern hills, among whose gorges lay the path
to Persia, and the Great Desert: then turned towards Eden, and
gazed with insatiable eyes upon the loveliest yet grandest scene
that the world possesses.

Gorgeous it was, and dream-like : so unreal and unearthly was
the beauty of the land, and the glory of the sea and sky that lay
spread before me. Eden was there, fulfilling every requisition
of the imagination, as well as of tradition ; and nothing but an
Eve was wanting to complete the paradise. Owing to the height
whence I looked down, the sea, one sheet of molten gold, appear-
ed to rise half-way up the sky, on which—so glowing was the
whole bright West—the horizon was only marked by the sun's
half vanished disc, hovering between the sea and sky that seemed
to have caught fire from his beams. The promontory of Tripoli,
dark with woods, ran out into the bay ; the shore swept thence
with many a graceful curve and bold promontory, until it faded
into distance on the far South. Thence, upward, to the base of