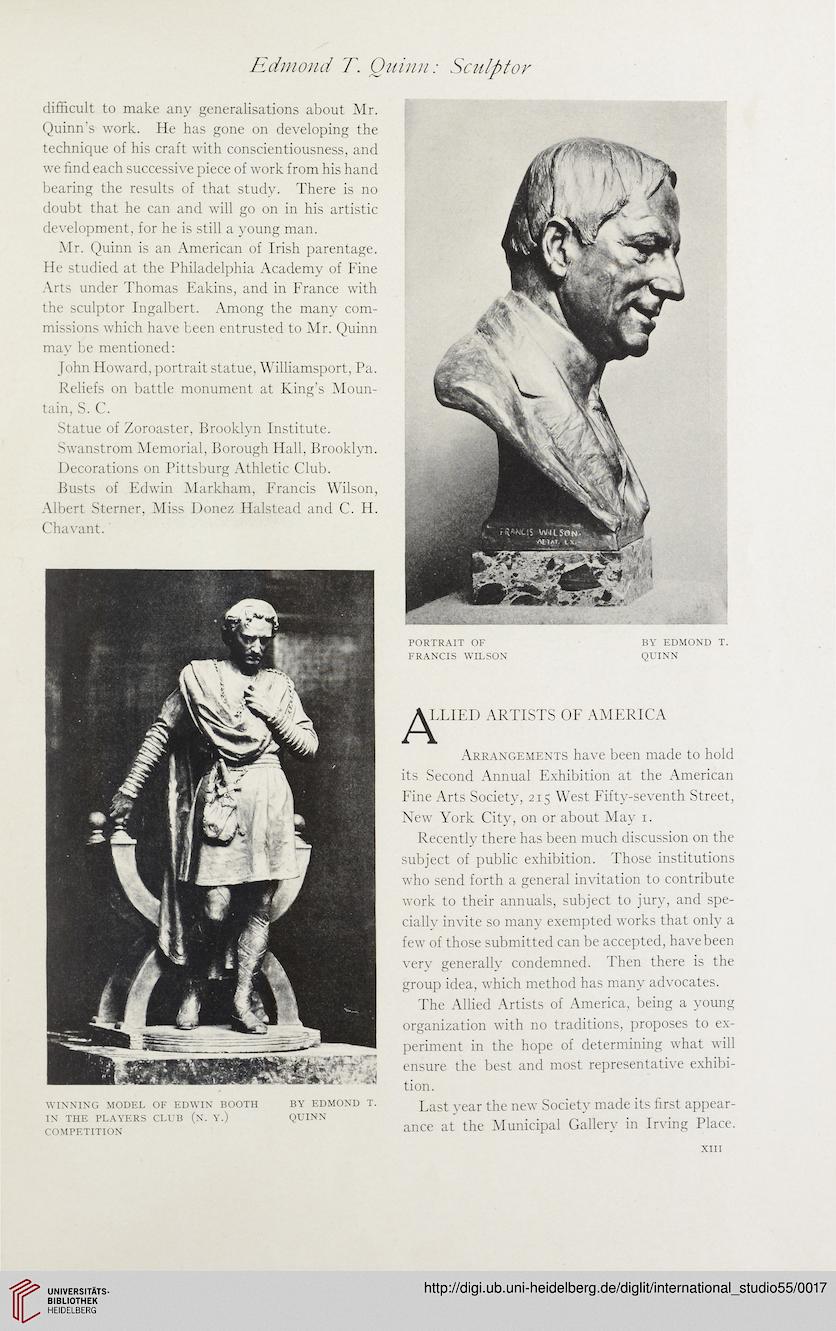 difficult to make any generalisations about Mr.
Quinn’s work. He has gone on developing the
technique of his craft with conscientiousness, and
we find each successive piece of work from his hand
bearing the results of that study. There is no
doubt that he can and will go on in his artistic
development, for he is still a young man.
Mr. Quinn is an American of Irish parentage.
He studied at the Philadelphia Academy of Fine
Arts under Thomas Eakins, and in France with
the sculptor Ingalbert. Among the many com-
missions which have been entrusted to Mr. Quinn
may be mentioned:
John Howard, portrait statue, Williamsport, Pa.
Reliefs on battle monument at King’s Moun-
tain, S. C.
Statue of Zoroaster, Brooklyn Institute.
Swanstrom Memorial, Borough Hall, Brooklyn.
Decorations on Pittsburg Athletic Club.
Busts of Edwin Markham, Francis Wilson,
Albert Sterner, Miss Donez Halstead and C. H.
Chavant.

y^LLIED ARTISTS OF AMERICA
Arrangements have been made to hold
its Second Annual Exhibition at the American
Fine Arts Society, 215 West Fifty-seventh Street,
New York City, on or about May 1.
Recently there has been much discussion on the
subject of public exhibition. Those institutions
who send forth a general invitation to contribute
work to their annuals, subject to jury, and spe-
cially invite so many exempted works that only a
few of those submitted can be accepted, have been
very generally condemned. Then there is the
group idea, which method has many advocates.
The Allied Artists of America, being a young
organization with no traditions, proposes to ex-
periment in the hope of determining what will
ensure the best and most representative exhibi-
tion.
Last year the new Society made its first appear-
ance at the Municipal Gallery in Irving Place.