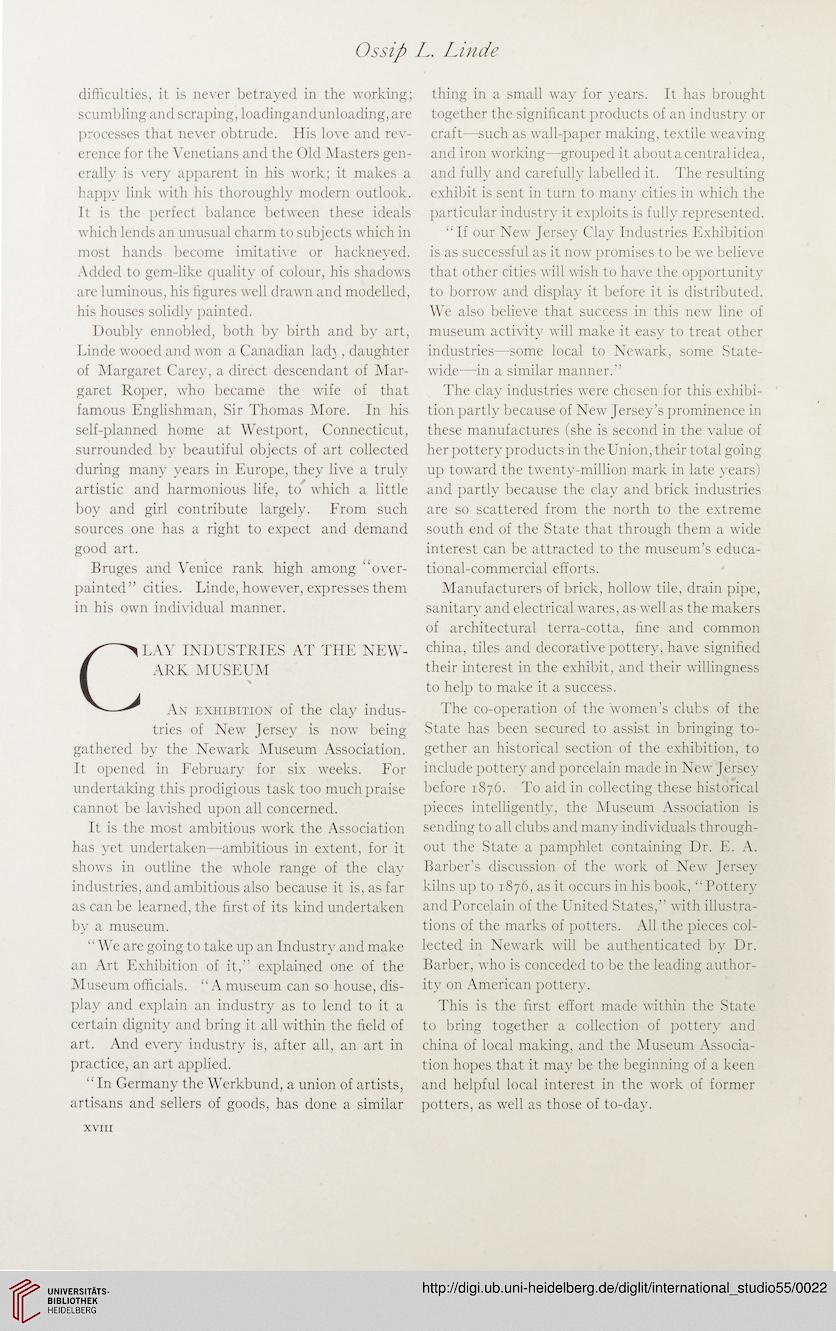 difficulties, it is never betrayed in the working;
scumbling and scraping, loading and unloading, are
processes that never obtrude. His love and rev-
erence for the Venetians and the Old Masters gen-
erally is very apparent in his work; it makes a
happy link with his thoroughly modern outlook.
It is the perfect balance between these ideals
which lends an unusual charm to subjects which in
most hands become imitative or hackneyed.
Added to gem-like quality of colour, his shadows
are luminous, his figures well drawn and modelled,
his houses solidly painted.
Doubly ennobled, both by birth and by art,
Linde wooed and won a Canadian ladj , daughter
of Margaret Carey, a direct descendant of Mar-
garet Roper, who became the wife of that
famous Englishman, Sir Thomas More. In his
self-planned home at Westport, Connecticut,
surrounded by beautiful objects of art collected
during many years in Europe, they live a truly
artistic and harmonious life, to which a little
boy and girl contribute largely. From such
sources one has a right to expect and demand
good art.
Bruges and Venice rank high among “over-
painted” cities. Linde, however, expresses them
in his own individual manner.
CLAY INDUSTRIES AT THE NEW-
ARK MUSEUM
An exhibition of the clay indus-
tries of New Jersey is now being
gathered by the Newark Museum Association.
It opened in February for six weeks. For
undertaking this prodigious task too much praise
cannot be lavished upon all concerned.
It is the most ambitious work the Association
has yet undertaken—ambitious in extent, for it
shows in outline the whole range of the clay
industries, and ambitious also because it is, as far
as can be learned, the first of its kind undertaken
by a museum.
“We are going to take up an Industry and make
an Art Exhibition of it,” explained one of the
Museum officials. “A museum can so house, dis-
play and explain an industry as to lend to it a
certain dignity and bring it all within the field of
art. And every industry is, after all, an art in
practice, an art applied.
“In Germany the Werkbund, a union of artists,
artisans and sellers of goods, has done a similar

thing in a small way for years. It has brought
together the significant products of an industry or
craft—such as wall-paper making, textile weaving
and iron working—grouped it about a central idea,
and fully and carefully labelled it. The resulting
exhibit is sent in turn to many cities in which the
particular industry it exploits is fully represented.
“If our New Jersey Clay Industries Exhibition
is as successful as it now promises to be we believe
that other cities will wish to have the opportunity
to borrow and display it before it is distributed.
We also believe that success in this new line of
museum activity will make it easy to treat other
industries—some local to Newark, some State-
wide—in a similar manner.”
The clay industries were chosen for this exhibi-
tion partly because of New Jersey’s prominence in
these manufactures (she is second in the value of
her pottery products in the Union, their total going
up toward the twenty-million mark in late years)
and partly because the clay and brick industries
are so scattered from the north to the extreme
south end of the State that through them a wide
interest can be attracted to the museum’s educa-
tional-commercial efforts.
Manufacturers of brick, hollow tile, drain pipe,
sanitary and electrical wares, as well as the makers
of architectural terra-cotta, fine and common
china, tiles and decorative pottery, have signified
their interest in the exhibit, and their willingness
to help to make it a success.
The co-operation of the women’s clubs of the
State has been secured to assist in bringing to-
gether an historical section of the exhibition, to
include pottery and porcelain made in New Jersey
before 1876. To aid in collecting these historical
pieces intelligently, the Museum Association is
sending to all clubs and many individuals through-
out the State a pamphlet containing Dr. E. A.
Barber’s discussion of the work of New Jersey
kilns up to 1876, as it occurs in his book, “Pottery
and Porcelain of the United States,” with illustra-
tions of the marks of potters. All the pieces col-
lected in Newark will be authenticated by Dr.
Barber, who is conceded to be the leading author-
ity on American pottery.
This is the first effort made within the State
to bring together a collection of pottery and
china of local making, and the Museum Associa-
tion hopes that it may be the beginning of a keen
and helpful local interest in the work of former
potters, as well as those of to-day.