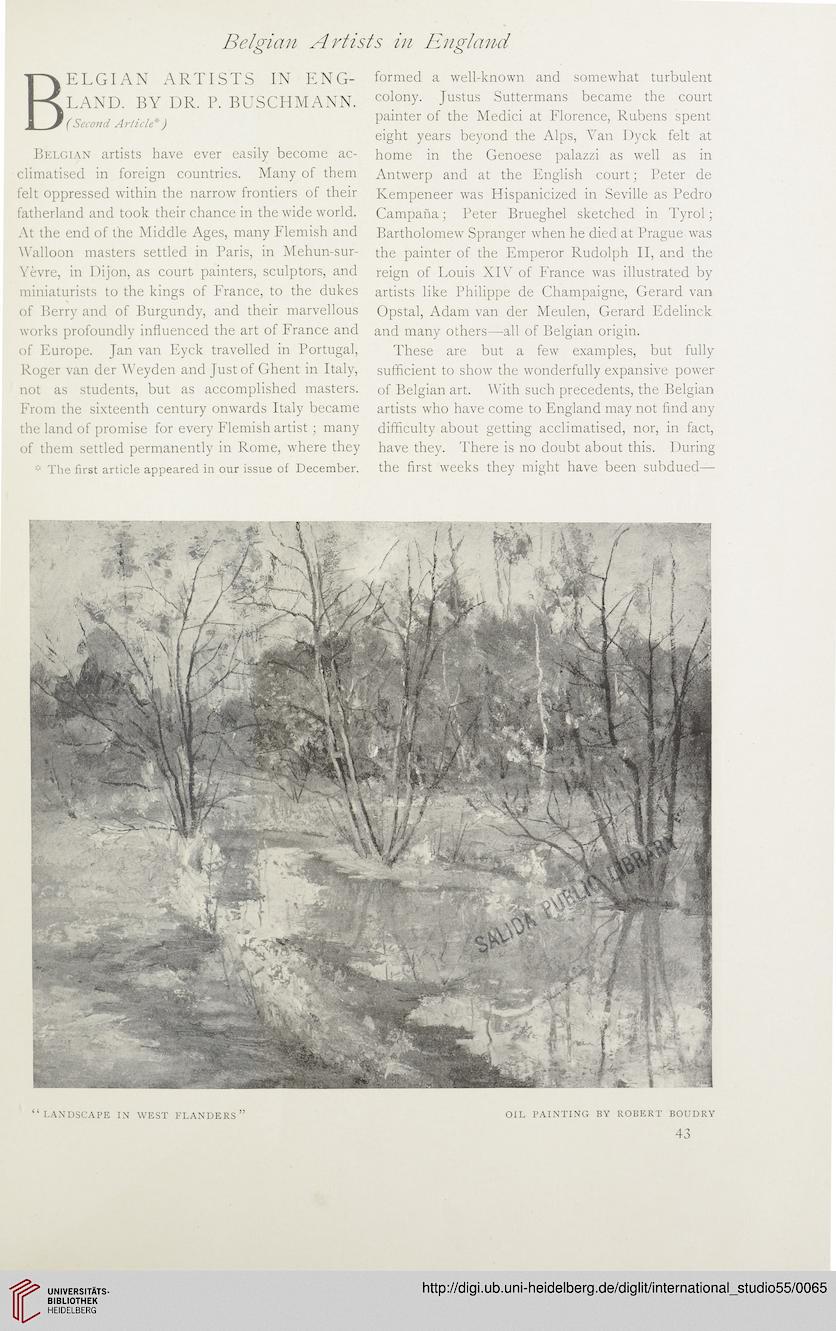 Belgian artists in Eng-
land. BY DR. P. BUSCHMANN.
(Second Article* )
Belgian artists have ever easily become ac-
climatised in foreign countries. Many of them
felt oppressed within the narrow frontiers of their
fatherland and took their chance in the wide world.
At the end of the Middle Ages, many Flemish and
Walloon masters settled in Paris, in Mehun-sur-
Yevre, in Dijon, as court painters, sculptors, and
miniaturists to the kings of France, to the dukes
of Berry and of Burgundy, and their marvellous
works profoundly influenced the art of France and
of Europe. Jan van Eyck travelled in Portugal,
Roger van der Weyden and Just of Ghent in Italy,
not as students, but as accomplished masters.
From the sixteenth century onwards Italy became
the land of promise for every Flemish artist ; many
of them settled permanently in Rome, where they
* The first article appeared in our issue of December.

formed a well-known and somewhat turbulent
colony. Justus Suttermans became the court
painter of the Medici at Florence, Rubens spent
eight years beyond the Alps, Van Dyck felt at
home in the Genoese palazzi as well as in
Antwerp and at the English court; Peter de
Kempeneer was Hispanicized in Seville as Pedro
Campana; Peter Brueghel sketched in Tyrol;
Bartholomew Spranger when he died at Prague was
the painter of the Emperor Rudolph II, and the
reign of Louis XIV of France was illustrated by
artists like Philippe de Champaigne, Gerard van
Opstal, Adam van der Meulen, Gerard Edelinck
and many others—all of Belgian origin.
These are but a few examples, but fully
sufficient to show the wonderfully expansive power
of Belgian art. With such precedents, the Belgian
artists who have come to England may not find any
difficulty about getting acclimatised, nor, in fact,
have they. There is no doubt about this. During
the first weeks they might have been subdued—