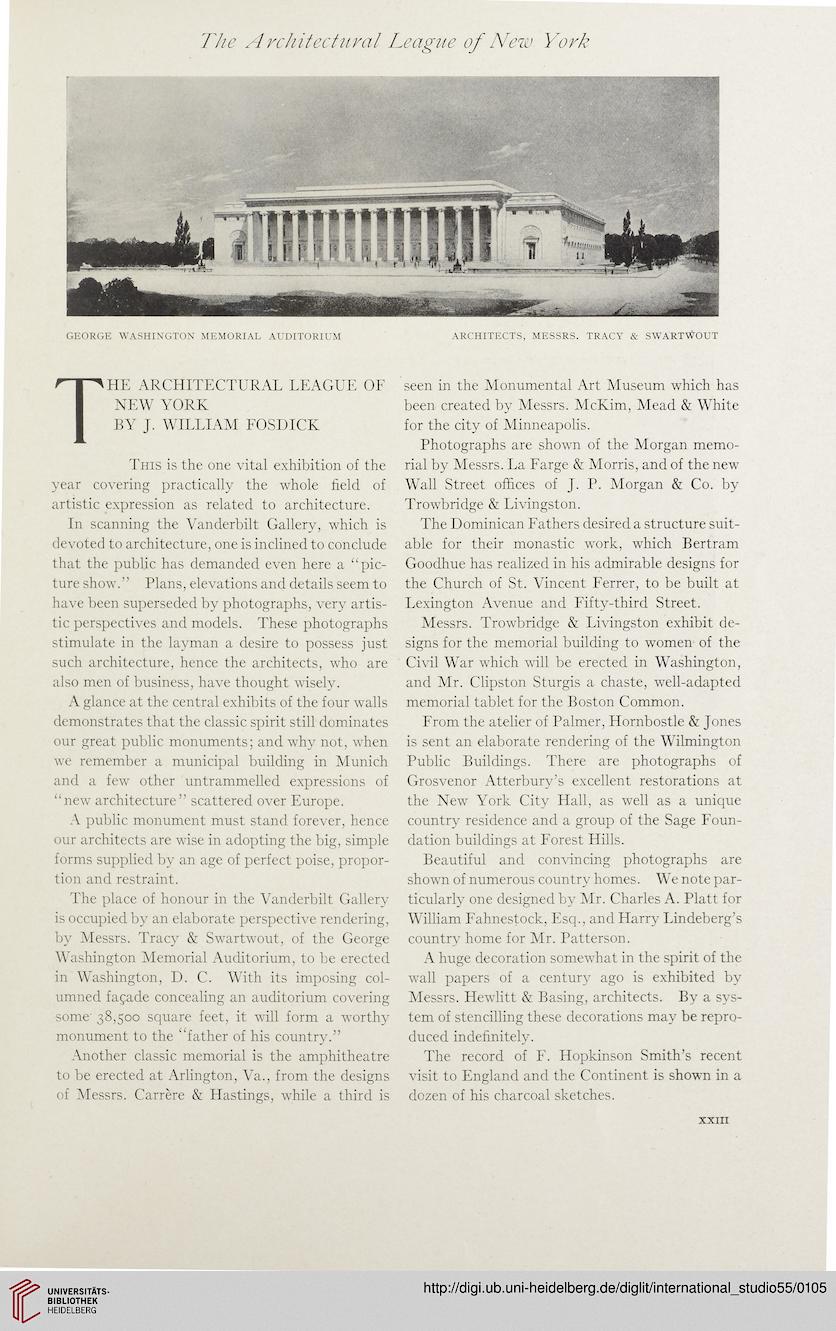 The architectural league of
NEW YORK
BY J. WILLIAM FOSDICK
This is the one vital exhibition of the
year covering practically the whole field of
artistic expression as related to architecture.
In scanning the Vanderbilt Gallery, which is
devoted to architecture, one is inclined to conclude
that the public has demanded even here a “pic-
ture show.” Plans, elevations and details seem to
have been superseded by photographs, very artis-
tic perspectives and models. These photographs
stimulate in the layman a desire to possess just
such architecture, hence the architects, who are
also men of business, have thought wisely.
A glance at the central exhibits of the four walls
demonstrates that the classic spirit still dominates
our great public monuments; and why not, when
we remember a municipal building in Munich
and a few other untrammelled expressions of
“new architecture” scattered over Europe.
A public monument must stand forever, hence
our architects are wise in adopting the big, simple
forms supplied by an age of perfect poise, propor-
tion and restraint.
The place of honour in the Vanderbilt Gallery
is occupied by an elaborate perspective rendering,
by Messrs. Tracy & Swartwout, of the George
Washington Memorial Auditorium, to be erected
in Washington, D. C. With its imposing col-
umned facade concealing an auditorium covering
■some' 38,500 square feet, it will form a worthy
monument to the “father of his country.”
Another classic memorial is the amphitheatre
to be erected at Arlington, Va., from the designs
of Messrs. Carrere & Hastings, while a third is

seen in the Monumental Art Museum which has
been created by Messrs. McKim, Mead & White
for the city of Minneapolis.
Photographs are shown of the Morgan memo-
rial by Messrs. La Farge & Morris, and of the new
Wall Street offices of J. P. Morgan & Co. by
Trowbridge & Livingston.
The Dominican Fathers desired a structure suit-
able for their monastic work, which Bertram
Goodhue has realized in his admirable designs for
the Church of St. Vincent Ferrer, to be built at
Lexington Avenue and Fifty-third Street.
Messrs. Trowbridge & Livingston exhibit de-
signs for the memorial building to women of the
Civil War which will be erected in Washington,
and Mr. Clipston Sturgis a chaste, well-adapted
memorial tablet for the Boston Common.
From the atelier of Palmer, Hornbostle & Jones
is sent an elaborate rendering of the Wilmington
Public Buildings. There are photographs of
Grosvenor Atterbury’s excellent restorations at
the New York City Hall, as well as a unique
country residence and a group of the Sage Foun-
dation buildings at Forest Hills.
Beautiful and convincing photographs are
shown of numerous country homes. We note par-
ticularly one designed by Mr. Charles A. Platt for
William Fahnestock, Esq., and Harry Lindeberg’s
country home for Mr. Patterson.
A huge decoration somewhat in the spirit of the
wall papers of a century ago is exhibited by
Messrs. Hewlitt & Basing, architects. By a sys-
tem of stencilling these decorations may be repro-
duced indefinitely.
The record of F. Hopkinson Smith’s recent
visit to England and the Continent is shown in a
dozen of his charcoal sketches.