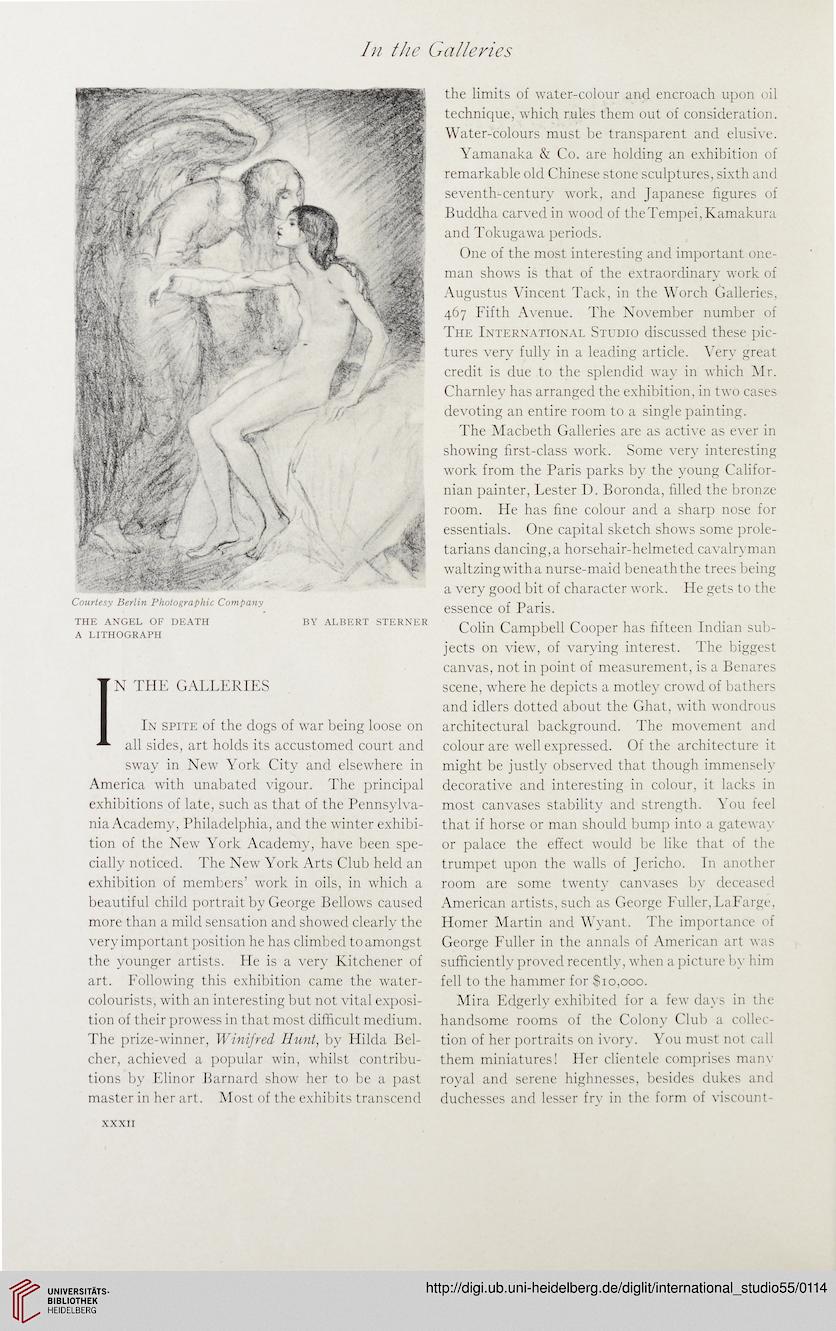 
N THE GALLERIES
In spite of the dogs of war being loose on
all sides, art holds its accustomed court and
sway in New York City and elsewhere in
America with unabated vigour. The principal
exhibitions of late, such as that of the Pennsylva-
nia Academy, Philadelphia, and the winter exhibi-
tion of the New York Academy, have been spe-
cially noticed. The New York Arts Club held an
exhibition of members’ work in oils, in which a
beautiful child portrait by George Bellows caused
more than a mild sensation and showed clearly the
very important position he has climbed to amongst
the younger artists. He is a very Kitchener of
art. Following this exhibition came the water-
colourists, with an interesting but not vital exposi-
tion of their prowess in that most difficult medium.
The prize-winner, Winifred Hunt, by Hilda Bel-
cher, achieved a popular win, whilst contribu-
tions by Elinor Barnard show her to be a past
master in her art. Most of the exhibits transcend

the limits of water-colour and encroach upon oil
technique, which rules them out of consideration.
Water-colours must be transparent and elusive.
Yamanaka & Co. are holding an exhibition of
remarkable old Chinese stone sculptures, sixth and
seventh-century work, and Japanese figures of
Buddha carved in wood of theTempei, Kamakura
and Tokugawa periods.
One of the most interesting and important one-
man shows is that of the extraordinary work of
Augustus Vincent Tack, in the Worch Galleries,
467 Fifth Avenue. The November number of
The International Studio discussed these pic-
tures very fully in a leading article. Very great
credit is due to the splendid way in which Mr.
Charnley has arranged the exhibition, in two cases
devoting an entire room to a single painting.
The Macbeth Galleries are as active as ever in
showing first-class work. Some very interesting
work from the Paris parks by the young Califor-
nian painter, Lester D. Boronda, filled the bronze
room. He has fine colour and a sharp nose for
essentials. One capital sketch shows some prole-
tarians dancing,a horsehair-helmeted cavalryman
waltzing with a nurse-maid beneath the trees being
a very good bit of character work. He gets to the
essence of Paris.
Colin Campbell Cooper has fifteen Indian sub-
jects on view, of varying interest. The biggest
canvas, not in point of measurement, is a Benares
scene, where he depicts a motley crowd of bathers
and idlers dotted about the Ghat, with wondrous
architectural background. The movement and
colour are well expressed. Of the architecture it
might be justly observed that though immensely
decorative and interesting in colour, it lacks in
most canvases stability and strength. You feel
that if horse or man should bump into a gateway
or palace the effect would be like that of the
trumpet upon the walls of Jericho. In another
room are some twenty canvases by deceased
American artists, such as George Fuller,LaFarge,
Homer Martin and Wyant. The importance of
George Fuller in the annals of American art was
sufficiently proved recently, when a picture by him
fell to the hammer for $10,000.
Mira Edgerly exhibited for a few days in the
handsome rooms of the Colony Club a collec-
tion of her portraits on ivory. You must not call
them miniatures! Her clientele comprises many
royal and serene highnesses, besides dukes and
duchesses and lesser fry in the form of viscount-