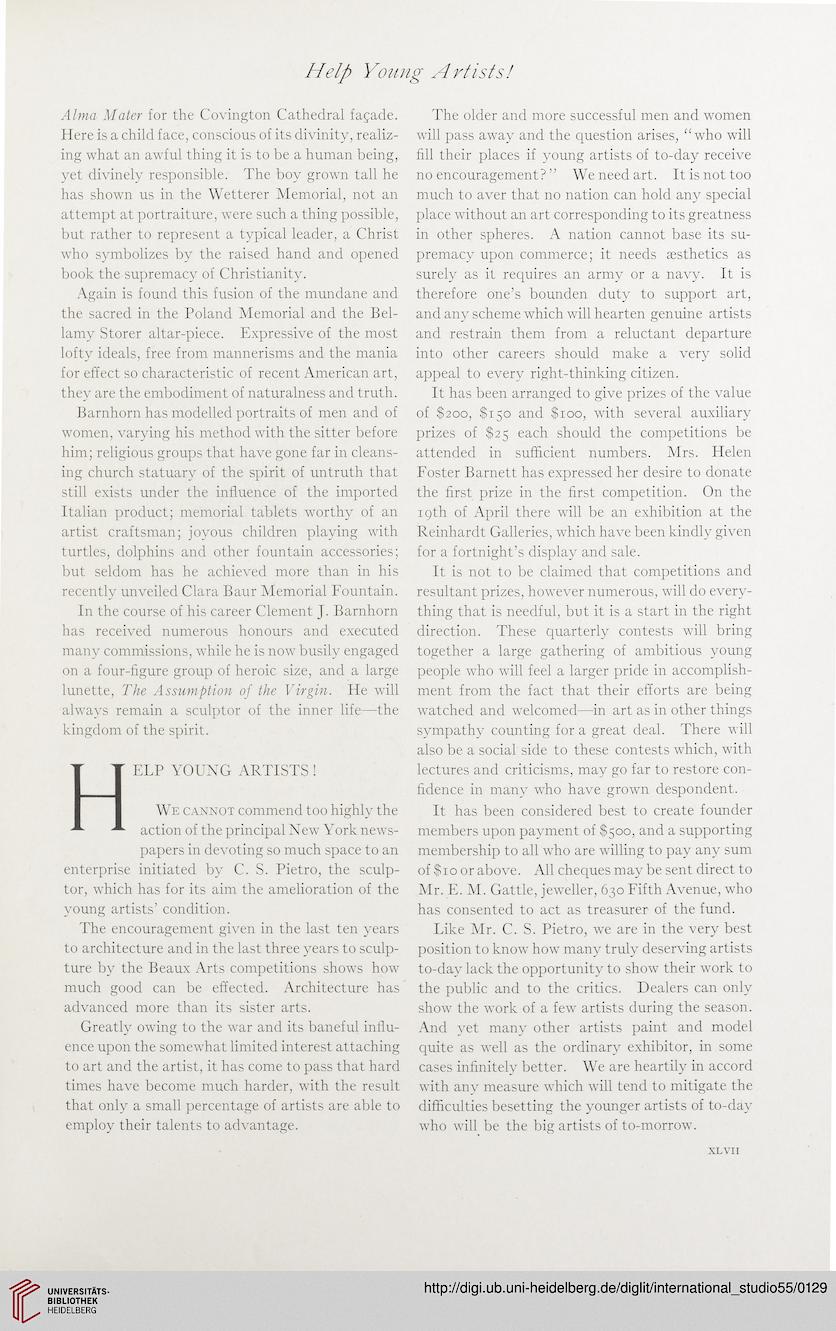 Alma Mater for the Covington Cathedral facade.
Here is a child face, conscious of its divinity, realiz-
ing what an awful thing it is to be a human being,
yet divinely responsible. The boy grown tall he
has shown us in the Wetterer Memorial, not an
attempt at portraiture, were such a thing possible,
but rather to represent a typical leader, a Christ
who symbolizes by the raised hand and opened
book the supremacy of Christianity.
Again is found this fusion of the mundane and
the sacred in the Poland Memorial and the Bel-
lamy Storer altar-piece. Expressive of the most
lofty ideals, free from mannerisms and the mania
for effect so characteristic of recent American art,
they are the embodiment of naturalness and truth.
Barnhorn has modelled portraits of men and of
women, varying his method with the sitter before
him; religious groups that have gone far in cleans-
ing church statuary of the spirit of untruth that
still exists under the influence of the imported
Italian product; memorial tablets worthy of an
artist craftsman; joyous children playing with
turtles, dolphins and other fountain accessories;
but seldom has he achieved more than in his
recently unveiled Clara Baur Memorial Fountain.
In the course of his career Clement J. Barnhorn
has received numerous honours and executed
many commissions, while he is now busily engaged
on a four-figure group of heroic size, and a large
lunette, The Assumption of the Virgin. He will
always remain a sculptor of the inner life—the
kingdom of the spirit.
ELP YOUNG ARTISTS!
We cannot commend too highly the
action of the principal New York news-
papers in devoting so much space to an
enterprise initiated by C. S. Pietro, the sculp-
tor, which has for its aim the amelioration of the
young artists’ condition.
The encouragement given in the last ten years
to architecture and in the last three years to sculp-
ture by the Beaux Arts competitions shows how
much good can be effected. Architecture has
advanced more than its sister arts.
Greatly owing to the war and its baneful influ-
ence upon the somewhat limited interest attaching
to art and the artist, it has come to pass that hard
times have become much harder, with the result
that only a small percentage of artists are able to
employ their talents to advantage.

The older and more successful men and women
will pass away and the question arises, “who will
fill their places if young artists of to-day receive
no encouragement? ” We need art. It is not too
much to aver that no nation can hold any special
place without an art corresponding to its greatness
in other spheres. A nation cannot base its su-
premacy upon commerce; it needs aesthetics as
surely as it requires an army or a navy. It is
therefore one’s bounden duty to support art,
and any scheme which will hearten genuine artists
and restrain them from a reluctant departure
into other careers should make a very solid
appeal to every right-thinking citizen.
It has been arranged to give prizes of the value
of $200, $150 and $100, with several auxiliary
prizes of $25 each should the competitions be
attended in sufficient numbers. Mrs. Helen
Foster Barnett has expressed her desire to donate
the first prize in the first competition. On the
19th of April there will be an exhibition at the
Reinhardt Galleries, which have been kindly given
for a fortnight’s display and sale.
It is not to be claimed that competitions and
resultant prizes, however numerous, will do every-
thing that is needful, but it is a start in the right
direction. These quarterly contests will bring
together a large gathering of ambitious young
people who will feel a larger pride in accomplish-
ment from the fact that their efforts are being
watched and welcomed—in art as in other things
sympathy counting for a great deal. There will
also be a social side to these contests which, with
lectures and criticisms, may go far to restore con-
fidence in many who have grown despondent.
It has been considered best to create founder
members upon payment of $500, and a supporting
membership to all who are willing to pay any sum
of $10 or above. All cheques may be sent direct to
Mr. E. M. Gattie, jeweller, 630 Fifth Avenue, who
has consented to act as treasurer of the fund.
Like Mr. C. S. Pietro, we are in the very best
position to know how many truly deserving artists
to-day lack the opportunity to show their work to
the public and to the critics. Dealers can only
show the work of a few artists during the season.
And yet many other artists paint and model
quite as well as the ordinary exhibitor, in some
cases infinitely better. We are heartily in accord
with any measure which will tend to mitigate the
difficulties besetting the younger artists of to-day
who will be the big artists of to-morrow.