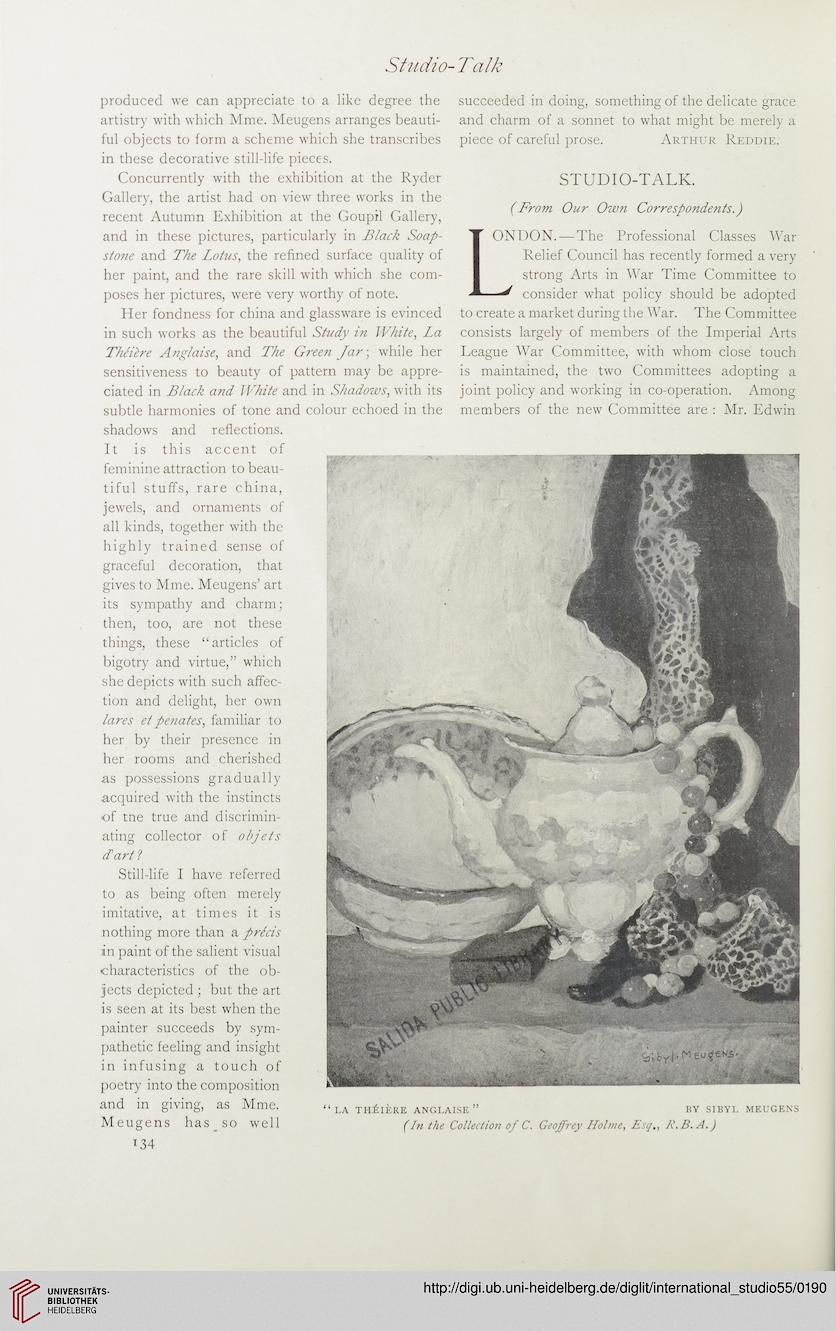 produced we can appreciate to a like degree the
artistry with which Mme. Meugens arranges beauti-
ful objects to form a scheme which she transcribes
in these decorative still-life pieces.
Concurrently with the exhibition at the Ryder
Gallery, the artist had on view three works in the
recent Autumn Exhibition at the Goupil Gallery,
and in these pictures, particularly in Black Soap-
stone and The Lotus, the refined surface quality of
her paint, and the rare skill with which she com-
poses her pictures, were very worthy of note.
Her fondness for china and glassware is evinced
in such works as the beautiful Study in White, La
Theiere Anglaise, and The Green Jar-, while her
sensitiveness to beauty of pattern may be appre-
ciated in Black and White and in Shadows, with its
subtle harmonies of tone and colour echoed in the

succeeded in doing, something of the delicate grace
and charm of a sonnet to what might be merely a
piece of careful prose. Arthur Reddie.
STUDIO-TALK.
(From Our Own Correspondents.)
LONDON.—The Professional Classes War
Relief Council has recently formed a very
strong Arts in War Time Committee to
-J consider what policy should be adopted
to create a market during the War. The Committee
consists largely of members of the Imperial Arts
League War Committee, with whom close touch
is maintained, the two Committees adopting a
joint policy and working in co-operation. Among
members of the new Committee are : Mr. Edwin

shadows and reflections.
It is this accent of
feminine attraction to beau-
tiful stuffs, rare china,
jewels, and ornaments of
all kinds, together with the
highly trained sense of
graceful decoration, that
gives to Mme. Meugens’ art
its sympathy and charm;
then, too, are not these
things, these “articles of
bigotry and virtue,” which
she depicts with such affec-
tion and delight, her own
lares etpenates, familiar to
her by their presence in
her rooms and cherished
as possessions gradually
acquired with the instincts
■of tne true and discrimin-
ating collector of objets
d art 1
Still-life I have referred
to as being often merely
imitative, at times it is
nothing more than a precis
in paint of the salient visual
•characteristics of the ob-
jects depicted ; but the art
is seen at its best when the
painter succeeds by sym-
pathetic feeling and insight
in infusing a touch of
poetry into the composition
and in giving, as Mme.
Meugens has so well
U4