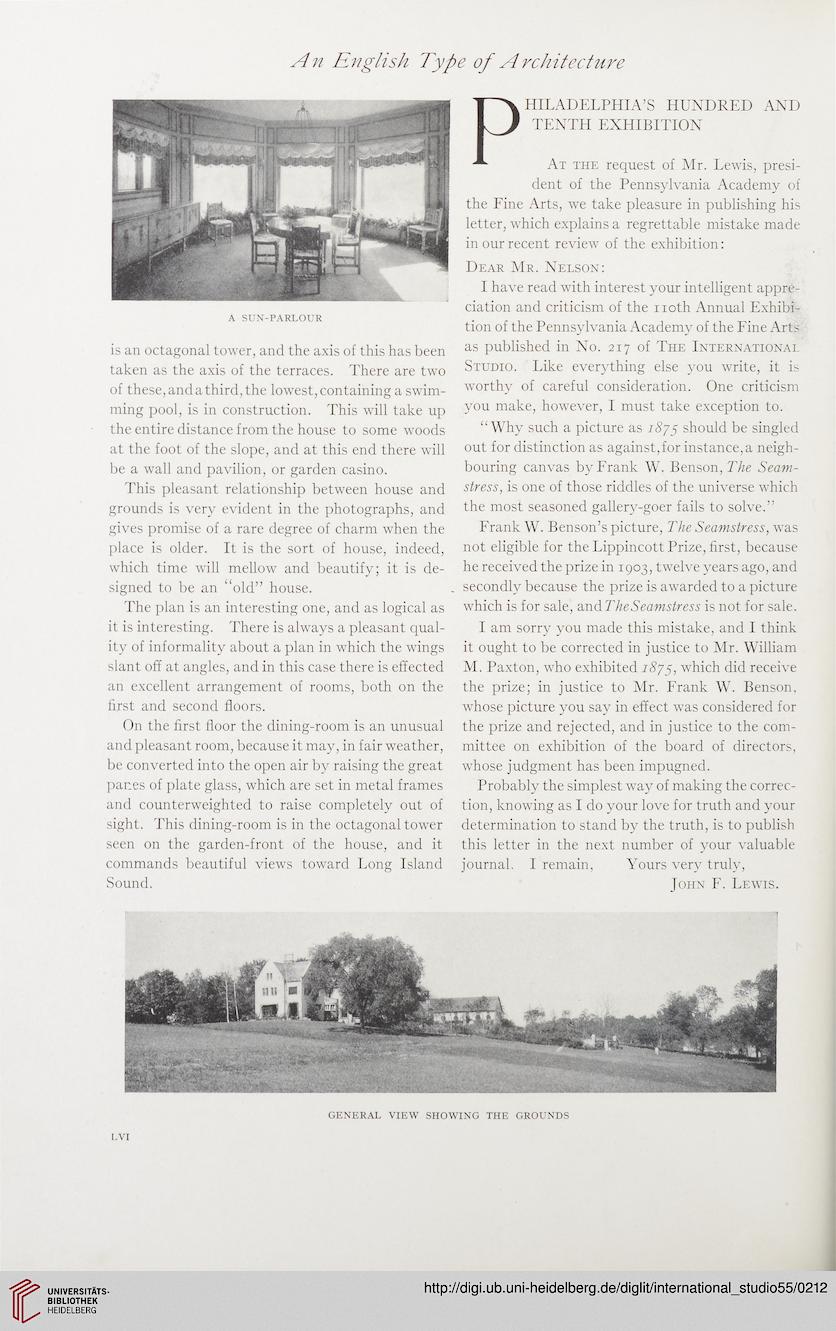 Information about OCR text
An English Type of Architecture


is an octagonal tower, and the axis of this has been
taken as the axis of the terraces. There are two
of these, and a third, the lowest, containing a swim-
ming pool, is in construction. This will take up
the entire distance from the house to some woods
at the foot of the slope, and at this end there will
be a wall and pavilion, or garden casino.
This pleasant relationship between house and
grounds is very evident in the photographs, and
gives promise of a rare degree of charm when the
place is older. It is the sort of house, indeed,
which time will mellow and beautify; it is de-
signed to be an “old” house.
The plan is an interesting one, and as logical as
it is interesting. There is always a pleasant qual-
ity of informality about a plan in which the wings
slant off at angles, and in this case there is effected
an excellent arrangement of rooms, both on the
first and second floors.
On the first floor the dining-room is an unusual
and pleasant room, because it may, in fair weather,
be converted into the open air by raising the great
panes of plate glass, which are set in metal frames
and counterweighted to raise completely out of
sight. This dining-room is in the octagonal tower
seen on the garden-front of the house, and it
commands beautiful views toward Long Island
Sound.

HILADELPHIA’S HUNDRED AND
TENTH EXHIBITION
At the request of Mr. Lewis, presi-
dent of the Pennsylvania Academy of
the Fine Arts, we take pleasure in publishing his


letter, which explains a regrettable mistake made

in our recent review of the exhibition:

Dear Mr. Nelson:
I have read with interest your intelligent appre-
ciation and criticism of the noth Annual Exhibi-
tion of the Pennsylvania Academy of the Fine Arts
as published in No. 217 of The International
Studio. Like everything else you write, it is
worthy of careful consideration. One criticism
you make, however, I must take exception to.
“Why such a picture as 1S75 should be singled
out for distinction as against,for instance, a neigh-
bouring canvas by Frank W. Benson, The Seam-
stress, is one of those riddles of the universe which
the most seasoned gallery-goer fails to solve.”
Frank W. Benson’s picture, The Seamstress, was
not eligible for the Lippincott Prize, first, because
he received the prize in 1903, twelve years ago, and
secondly because the prize is awarded to a picture
which is for sale, and TheSeamstress is not for sale.
I am sorry you made this mistake, and I think
it ought to be corrected in justice to Mr. William
M. Paxton, who exhibited 1875, wflfich did receive
the prize; in justice to Mr. Frank W. Benson,
whose picture you say in effect was considered for
the prize and rejected, and in justice to the com-
mittee on exhibition of the board of directors,
whose judgment has been impugned.
Probably the simplest way of making the correc-
tion, knowing as I do your love for truth and your
determination to stand by the truth, is to publish
this letter in the next number of your valuable
journal. I remain, Yours very truly,
John F. Lewis.