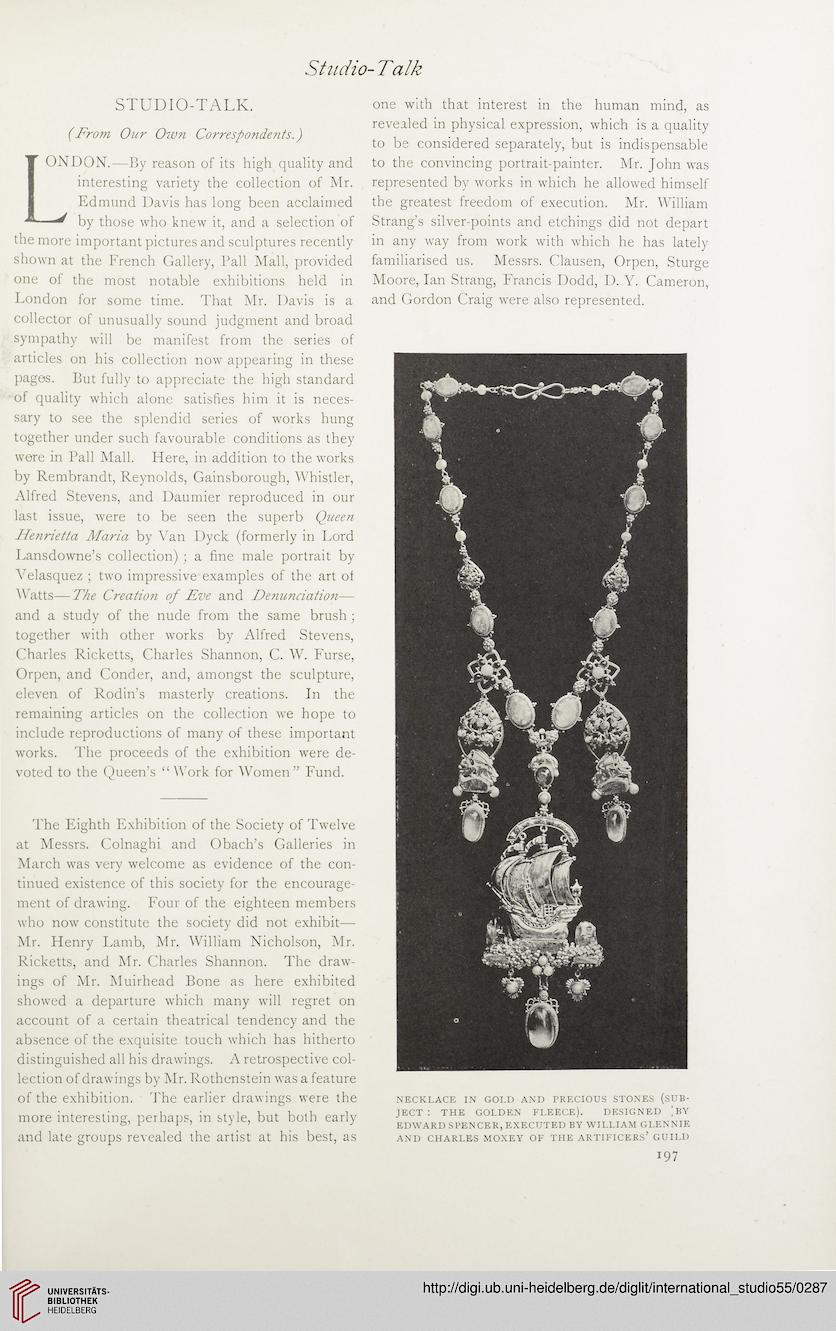 STUDIO-TALK.
(From Our Own Correspondents.)
EDON.—By reason of its high quality and
interesting variety the collection of Mr.
Edmund Davis has long been acclaimed
by those who knew it, and a selection of
the more important pictures and sculptures recently
shown at the French Gallery, Pall Mall, provided
one of the most notable exhibitions held in
London for some time. That Mr. Davis is a
collector of unusually sound judgment and broad
sympathy will be manifest from the series of
articles on his collection now appearing in these
pages. But fully to appreciate the high standard
of quality which alone satisfies him it is neces-
sary to see the splendid series of works hung
together under such favourable conditions as they
were in Pall Mall. Here, in addition to the works
by Rembrandt, Reynolds, Gainsborough, Whistler,
Alfred Stevens, and Daumier reproduced in our
last issue, were to be seen the superb Queen
Henrietta Maria by Van Dyck (formerly in Lord
Lansdowne’s collection) ; a fine male portrait by
Velasquez ; two impressive examples of the art of
Watts— The Creation of Eve and Denunciation—
and a study of the nude from the same brush;
together with other works by Alfred Stevens,
Charles Ricketts, Charles Shannon, C. W. Furse,
Orpen, and Conder, and, amongst the sculpture,
eleven of Rodin’s masterly creations. In the
remaining articles on the collection we hope to
include reproductions of many of these important
works. The proceeds of the exhibition were de-
voted to the Queen’s “Work for Women” Fund.

The Eighth Exhibition of the Society of Twelve
at Messrs. Colnaghi and Obach’s Galleries in
March was very welcome as evidence of the con-
tinued existence of this society for the encourage-
ment of drawing. Four of the eighteen members
who now constitute the society did not exhibit—
Mr. Henry Lamb, Mr. William Nicholson, Mr.
Ricketts, and Mr. Charles Shannon. The draw-
ings of Mr. Muirhead Bone as here exhibited
showed a departure which many will regret on
account of a certain theatrical tendency and the
absence of the exquisite touch which has hitherto
distinguished all his drawings. A retrospective col-
lection of drawings by Mr. Rothcnstein was a feature
of the exhibition. The earlier drawings were the
more interesting, perhaps, in style, but both early
and late groups revealed the artist at his best, as

one with that interest in the human mind, as
revealed in physical expression, which is a quality
to be considered separately, but is indispensable
to the convincing portrait-painter. Mr. John was
represented by works in which he allowed himself
the greatest freedom of execution. Mr. William
Strang’s silver-points and etchings did not depart
in any way from work with which he has lately
familiarised us. Messrs. Clausen, Orpen, Sturge
Moore, Ian Strang, Francis Dodd, D. Y. Cameron,
and Gordon Craig were also represented.


NECKLACE IN GOLD AND PRECIOUS STONES (SUB-
JECT : THE GOLDEN FLEECE). DESIGNED ' BY
EDWARD SPENCER, EXECUTED BY WILLIAM GLENNIE
AND CHARLES MOXEY OF THE ARTIFICERS’ GUILD
197