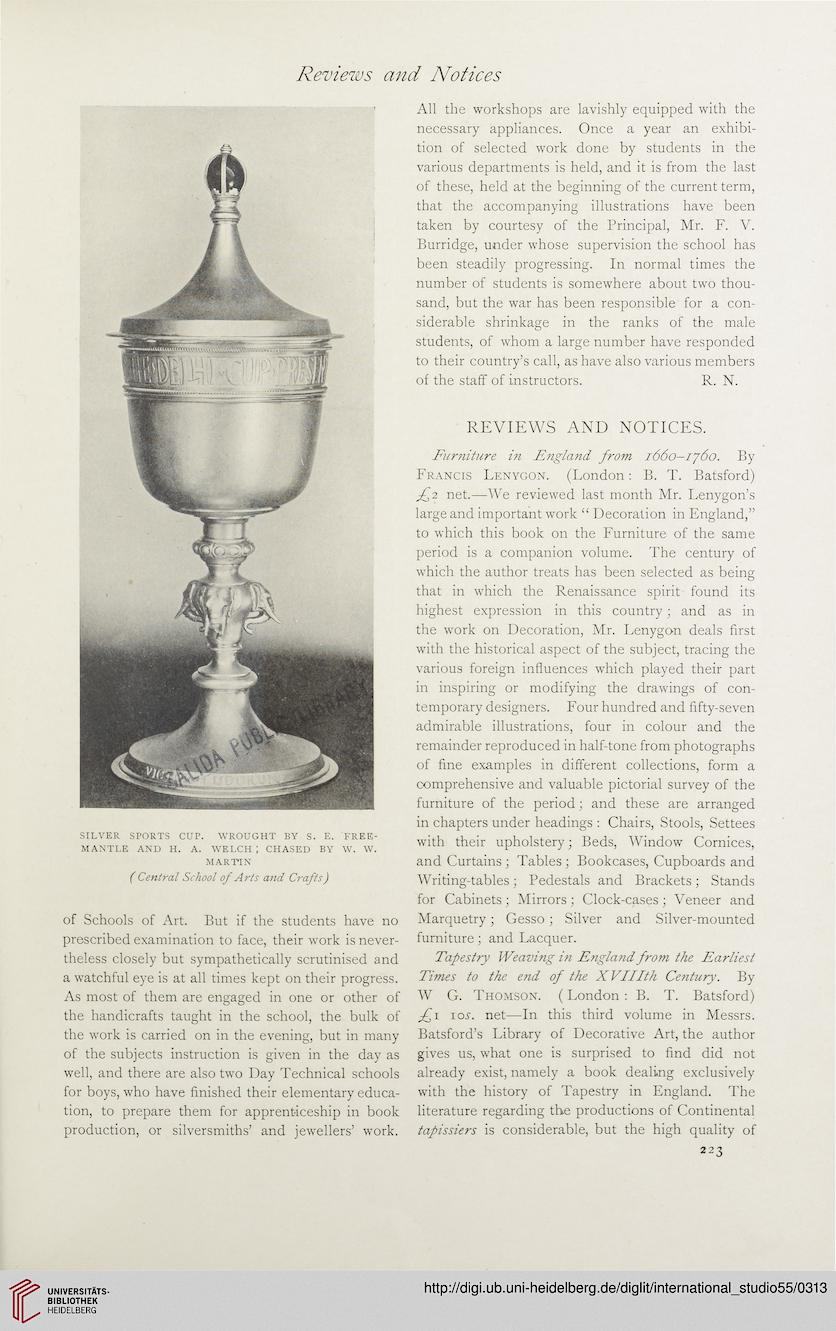 of Schools of Art. But if the students have no
prescribed examination to face, their work is never-
theless closely but sympathetically scrutinised and
a watchful eye is at all times kept on their progress.
As most of them are engaged in one or other of
the handicrafts taught in the school, the bulk of
the work is carried on in the evening, but in many
of the subjects instruction is given in the day as
well, and there are also two Day Technical schools
for boys, who have finished their elementary educa-
tion, to prepare them for apprenticeship in book
production, or silversmiths’ and jewellers’ work.

All the workshops are lavishly equipped with the
necessary appliances. Once a year an exhibi-
tion of selected work done by students in the
various departments is held, and it is from the last
of these, held at the beginning of the current term,
that the accompanying illustrations have been
taken by courtesy of the Principal, Mr. F. V.
Burridge, under whose supervision the school has
been steadily progressing. In normal times the
number of students is somewhere about two thou-
sand, but the war has been responsible for a con-
siderable shrinkage in the ranks of the male
students, of whom a large number have responded
to their country’s call, as have also various members
of the staff of instructors. R. N.
REVIEWS AND NOTICES.
Furniture in England from 1660-1760. By
Francis Lenygon. (London: B. T. Batsford)
fR net.—We reviewed last month Mr. Lenygon’s
large and important work “ Decoration in England,”
to which this book on the Furniture of the same
period is a companion volume. The century of
which the author treats has been selected as being
that in which the Renaissance spirit found its
highest expression in this country; and as in
the work on Decoration, Mr. Lenygo-n deals first
with the historical aspect of the subject, tracing the
various foreign influences which played their part
in inspiring or modifying the drawings of con-
temporary designers. Four hundred and fifty-seven
admirable illustrations, four in colour and the
remainder reproduced in half-tone from photographs
of fine examples in different collections, form a
comprehensive and valuable pictorial survey of the
furniture of the period; and these are arranged
in chapters under headings : Chairs, Stools, Settees
with their upholstery; Beds, Window Cornices,
and Curtains ; Tables ; Bookcases, Cupboards and
Writing-tables; Pedestals and Brackets; Stands
for Cabinets; Mirrors; Clock-cases; Veneer and
Marquetry; Gesso; Silver and Silver-mounted
furniture; and Lacquer.
Tapestry Weaving in England from the Earliest
Times to the end of the XVIIIth Century. By
W G. Thomson. (London: B. T. Batsford)
^1 1 os', net—In this third volume in Messrs.
Batsford’s Library of Decorative Art, the author
gives us, what one is surprised to find did not
already exist, namely a book dealing exclusively
with the history of Tapestry in England. The
literature regarding the productions of Continental
tapissiers is considerable, but the high quality of
223