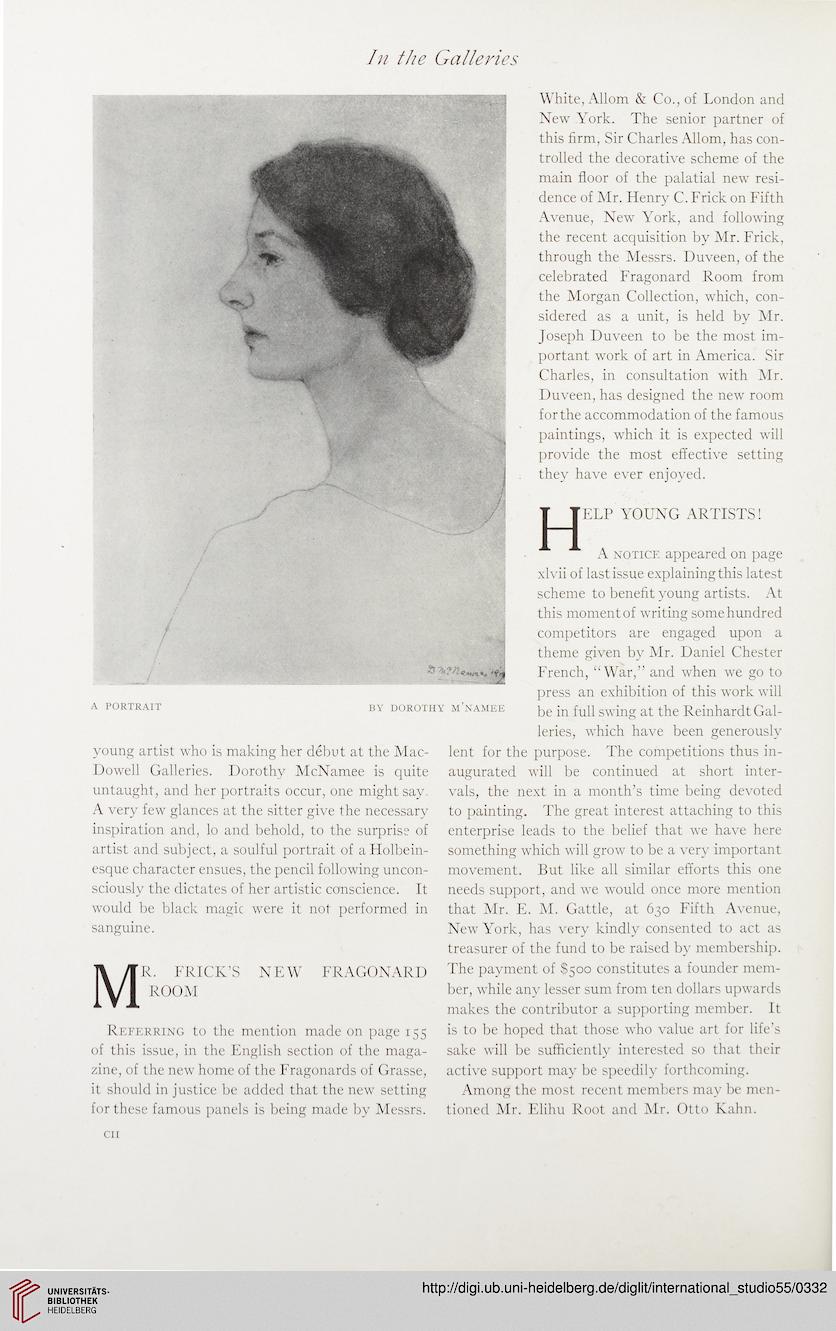 young artist who is making her debut at the Mac-
Dowell Galleries. Dorothy McNamee is quite
untaught, and her portraits occur, one might say.
A very few glances at the sitter give the necessary
inspiration and, lo and behold, to the surprise of
artist and subject, a soulful portrait of aHolbein-
esque character ensues, the pencil following uncon-
sciously the dictates of her artistic conscience. It
would be black magic were it not performed in
sanguine.
MR. FRICK’S NEW FRAGONARD
ROOM
Referring to the mention made on page 155
of this issue, in the English section of the maga-
zine, of the new home of the Fragonards of Grasse,
it should in justice be added that the new setting
for these famous panels is being made by Messrs.

White, Allom & Co., of London and
New York. The senior partner of
this firm, Sir Charles Allom, has con-
trolled the decorative scheme of the
main floor of the palatial new resi-
dence of Mr. Henry C. Frick on Fifth
Avenue, New York, and following
the recent acquisition by Mr. Frick,
through the Messrs. Duveen, of the
celebrated Fragonard Room from
the Morgan Collection, which, con-
sidered as a unit, is held by Mr.
Joseph Duveen to be the most im-
portant work of art in America. Sir
Charles, in consultation with Mr.
Duveen, has designed the new room
for the accommodation of the famous
paintings, which it is expected will
provide the most effective setting
they have ever enjoyed.
ELP YOUNG ARTISTS!
A notice appeared on page
xlvii of last issue explaining this latest
scheme to benefit young artists. At
this moment of writing some hundred
competitors are engaged upon a
theme given by Mr. Daniel Chester
French, “War,” and when we go to
press an exhibition of this work will
be in full swing at the Reinhardt Gal-
leries, which have been generously
lent for the purpose. The competitions thus in-
augurated will be continued at short inter-
vals, the next in a month’s time being devoted
to painting. The great interest attaching to this
enterprise leads to the belief that we have here
something which will grow to be a very important
movement. But like all similar efforts this one
needs support, and we would once more mention
that Mr. E. M. Gattie, at 630 Fifth Avenue,
New York, has very kindly consented to act as
treasurer of the fund to be raised by membership.
The payment of $500 constitutes a founder mem-
ber, while any lesser sum from ten dollars upwards
makes the contributor a supporting member. It
is to be hoped that those who value art for life’s
sake will be sufficiently interested so that their
active support may be speedily forthcoming.
Among the most recent members may be men-
tioned Mr. Elihu Root and Mr. Otto Kahn.