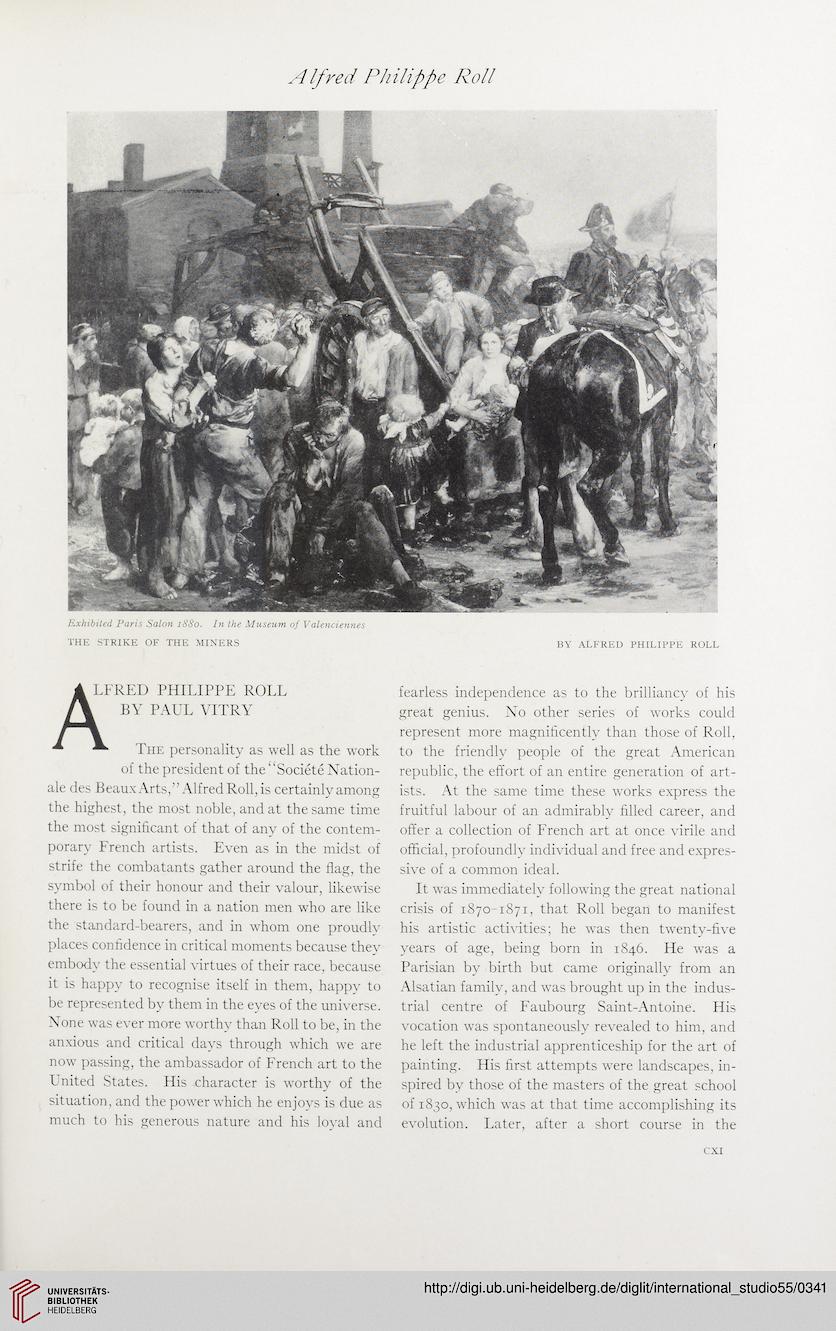 Exhibited Paris Salon 1880. In the Museum of Valenciennes
THE STRIKE OF THE MINERS BY ALFRED PHILIPPE ROLL


< LFRED PHILIPPE ROLL
BY PAUL VITRY
* The personality as well as the work
of the president of the “Societe Nation-
ale des Beaux Arts,” Alfred Roll, is certainly among
the highest, the most noble, and at the same time
the most significant of that of any of the contem-
porary French artists. Even as in the midst of
strife the combatants gather around the flag, the
symbol of their honour and their valour, likewise
there is to be found in a nation men who are like
the standard-bearers, and in whom one proudly
places confidence in critical moments because they
embody the essential virtues of their race, because
it is happy to recognise itself in them, happy to
be represented by them in the eyes of the universe.
None was ever more worthy than Roll to be, in the
anxious and critical days through which we are
now passing, the ambassador of French art to the
United States. His character is worthy of the
situation, and the power which he enjoys is due as
much to his generous nature and his loyal and

fearless independence as to the brilliancy of his
great genius. No other series of works could
represent more magnificently than those of Roll,
to the friendly people of the great American
republic, the effort of an entire generation of art-
ists. At the same time these works express the
fruitful labour of an admirably filled career, and
offer a collection of French art at once virile and
official, profoundly individual and free and expres-
sive of a common ideal.
It was immediately following the great national
crisis of 1870-1871, that Roll began to manifest
his artistic activities; he was then twenty-five
years of age, being born in 1846. He was a
Parisian by birth but came originally from an
Alsatian family, and was brought up in the indus-
trial centre of Faubourg Saint-Antoine. His
vocation was spontaneously revealed to him, and
he left the industrial apprenticeship for the art of
painting. His first attempts were landscapes, in-
spired by those of the masters of the great school
of 1830, which was at that time accomplishing its
evolution. Later, after a short course in the