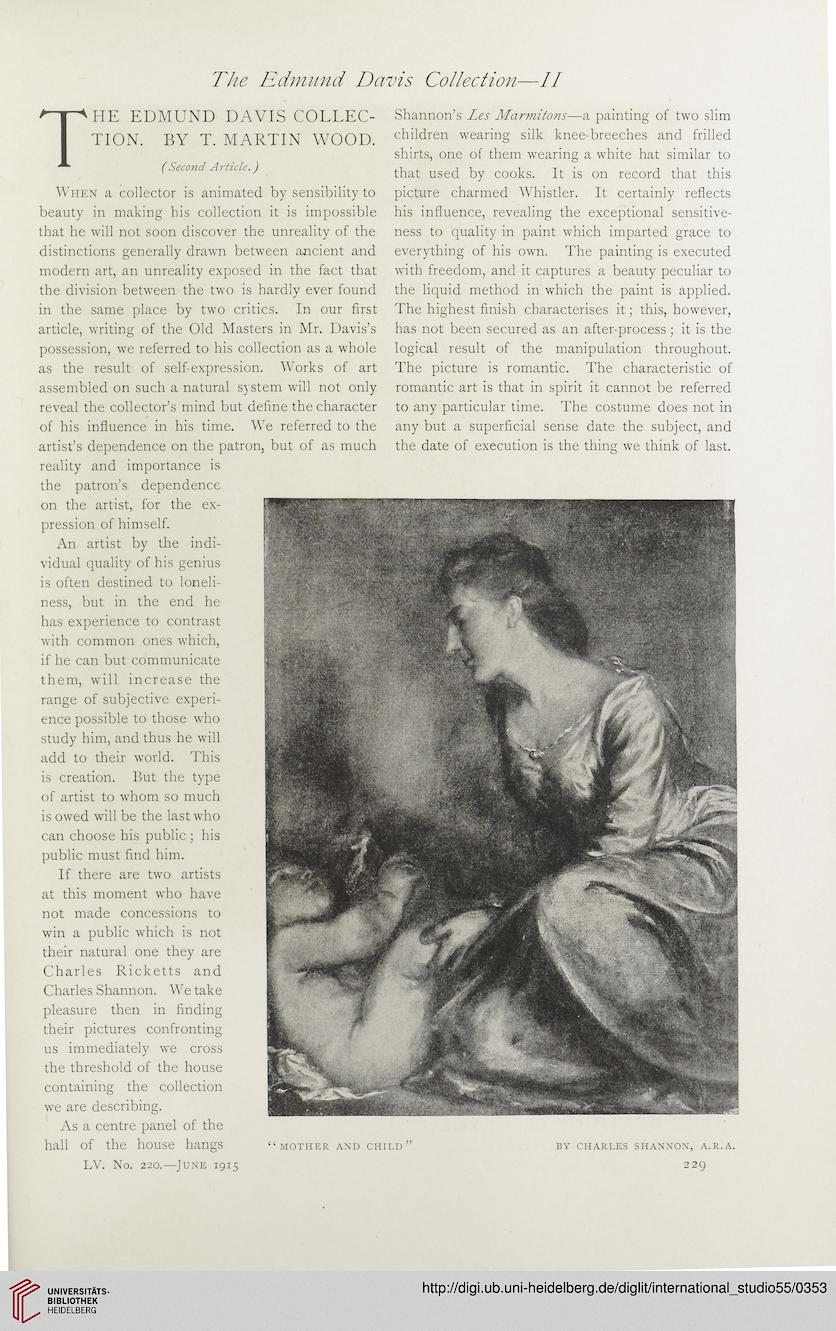 THE EDMUND DAVIS COLLEC¬
TION. BY T. MARTIN WOOD.
(Second Article.)
When a collector is animated by sensibility to
beauty in making his collection it is impossible
that he will not soon discover the unreality of the
distinctions generally drawn between ancient and
modern art, an unreality exposed in the fact that
the division between the two is hardly ever found
in the same place by two critics. In our first
article, writing of the Old Masters in Mr. Davis’s
possession, we referred to his collection as a whole
as the result of self-expression. Works of art
assembled on such a natural system will not only
reveal the collector’s mind but define the character
of his influence in his time. We referred to the
artist’s dependence on the patron, but of as much
reality and importance is
the patron’s dependence
on the artist, for the ex¬
pression of himself.
An artist by the indi¬
vidual quality of his genius
is often destined to loneli¬
ness, but in the end he
has experience to contrast
with common ones which,
if he can but communicate
them, will increase the
range of subjective experi¬
ence possible to those who
study him, and thus he will
add to their world. This
is creation. But the type
of artist to whom so much
is owed will be the last who
can choose his public ; his
public must find him.
If there are two artists
at this moment who have
not made concessions to
win a public which is not
their natural one they are
Charles Ricketts and
Charles Shannon. We take
pleasure then in finding
their pictures confronting
us immediately we cross
the threshold of the house
containing the collection
we are describing.
As a centre panel of the
hall of the house hangs

Shannon’s Les Marmitons—a painting of two slim
children wearing silk knee-breeches and frilled
shirts, one of them wearing a white hat similar to
that used by cooks. It is on record that this
picture charmed Whistler. It certainly reflects
his influence, revealing the exceptional sensitive-
ness to quality in paint which imparted grace to
everything of his own. The painting is executed
with freedom, and it captures a beauty peculiar to
the liquid method in which the paint is applied.
The highest finish characterises it; this, however,
has not been secured as an after-process; it is the
logical result of the manipulation throughout.
The picture is romantic. The characteristic of
romantic art is that in spirit it cannot be referred
to any particular time. The costume does not in
any but a superficial sense date the subject, and
the date of execution is the thing we think of last.