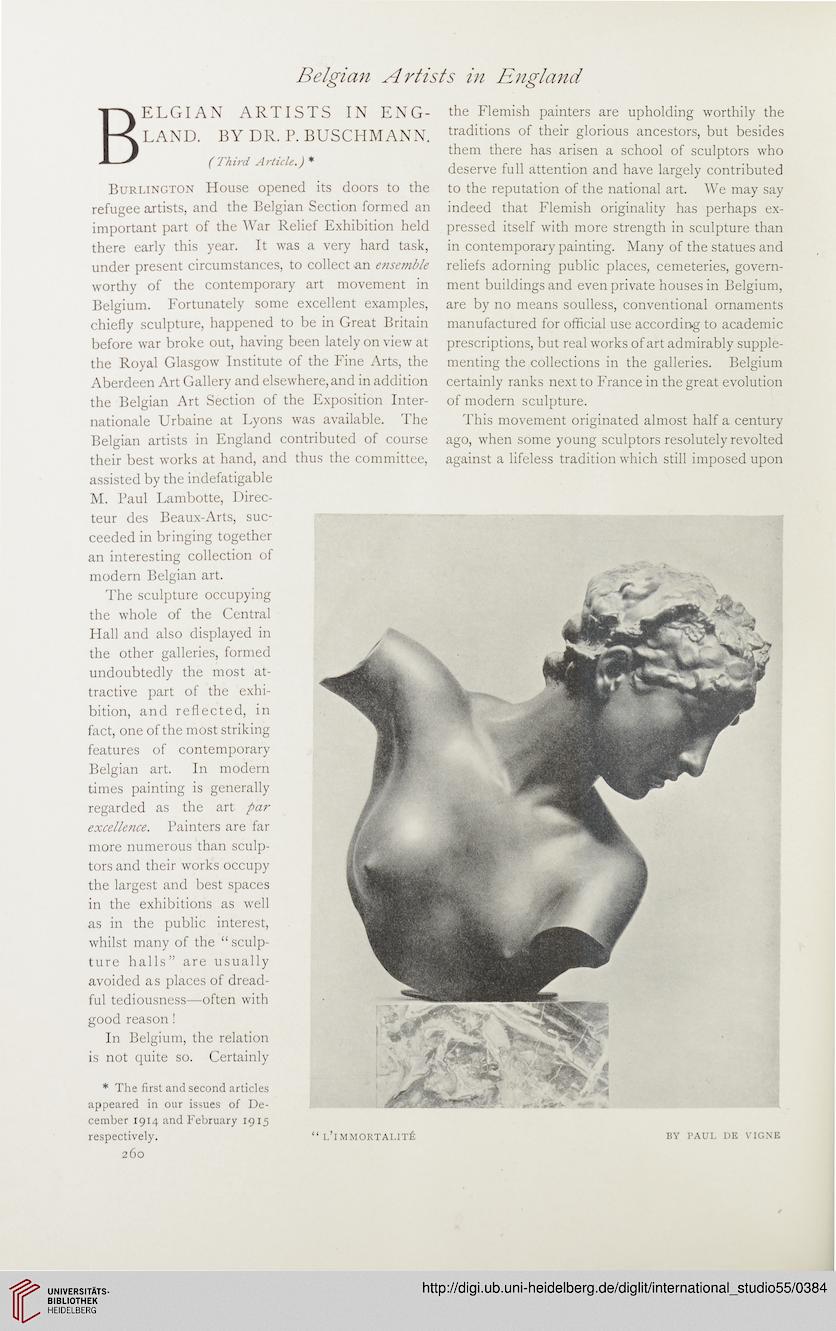 Belgian artists in Eng-
land. BY DR. P. BUSCHMANN.
(Third Article.) *
Burlington House opened its doors to the
refugee artists, and the Belgian Section formed an
important part of the War Relief Exhibition held
there early this year. It was a very hard task,
under present circumstances, to collect an ensemble
worthy of the contemporary art movement in
Belgium. Fortunately some excellent examples,
chiefly sculpture, happened to be in Great Britain
before war broke out, having been lately on view at
the Royal Glasgow Institute of the Fine Arts, the
Aberdeen Art Gallery and elsewhere, and in addition
the Belgian Art Section of the Exposition Inter-
nationale Urbaine at Lyons was available. The
Belgian artists in England contributed of course
their best works at hand, and thus the committee,
assisted by the indefatigable
M. Paul Lambotte, Direc-
teur des Beaux-Arts, suc¬
ceeded in bringing together
an interesting collection of
modern Belgian art.
The sculpture occupying
the whole of the Central
Hall and also displayed in
the other galleries, formed
undoubtedly the most at¬
tractive part of the exhi¬
bition, and reflected, in
fact, one of the most striking
features of contemporary
Belgian art. In modern
times painting is generally
regarded as the art par
excellence. Painters are far
more numerous than sculp¬
tors and their works occupy
the largest and best spaces
in the exhibitions as well
as in the public interest,
whilst many of the “ sculp-
ture halls” are usually
avoided as places of dread¬
ful tediousness—often with
good reason!
In Belgium, the relation
is not quite so. Certainly
* The first and second articles
appeared in our issues of De¬
cember 1914 and February 1915
respectively.
260

the Flemish painters are upholding worthily the
traditions of their glorious ancestors, but besides
them there has arisen a school of sculptors who
deserve full attention and have largely contributed
to the reputation of the national art. We may say
indeed that Flemish originality has perhaps ex-
pressed itself with more strength in sculpture than
in contemporary painting. Many of the statues and
reliefs adorning public places, cemeteries, govern-
ment buildingsand even private houses in Belgium,
are by no means soulless, conventional ornaments
manufactured for official use according to academic
prescriptions, but real works of art admirably supple-
menting the collections in the galleries. Belgium
certainly ranks next to France in the great evolution
of modern sculpture.
This movement originated almost half a century
ago, when some young sculptors resolutely revolted
against a lifeless tradition which still imposed upon