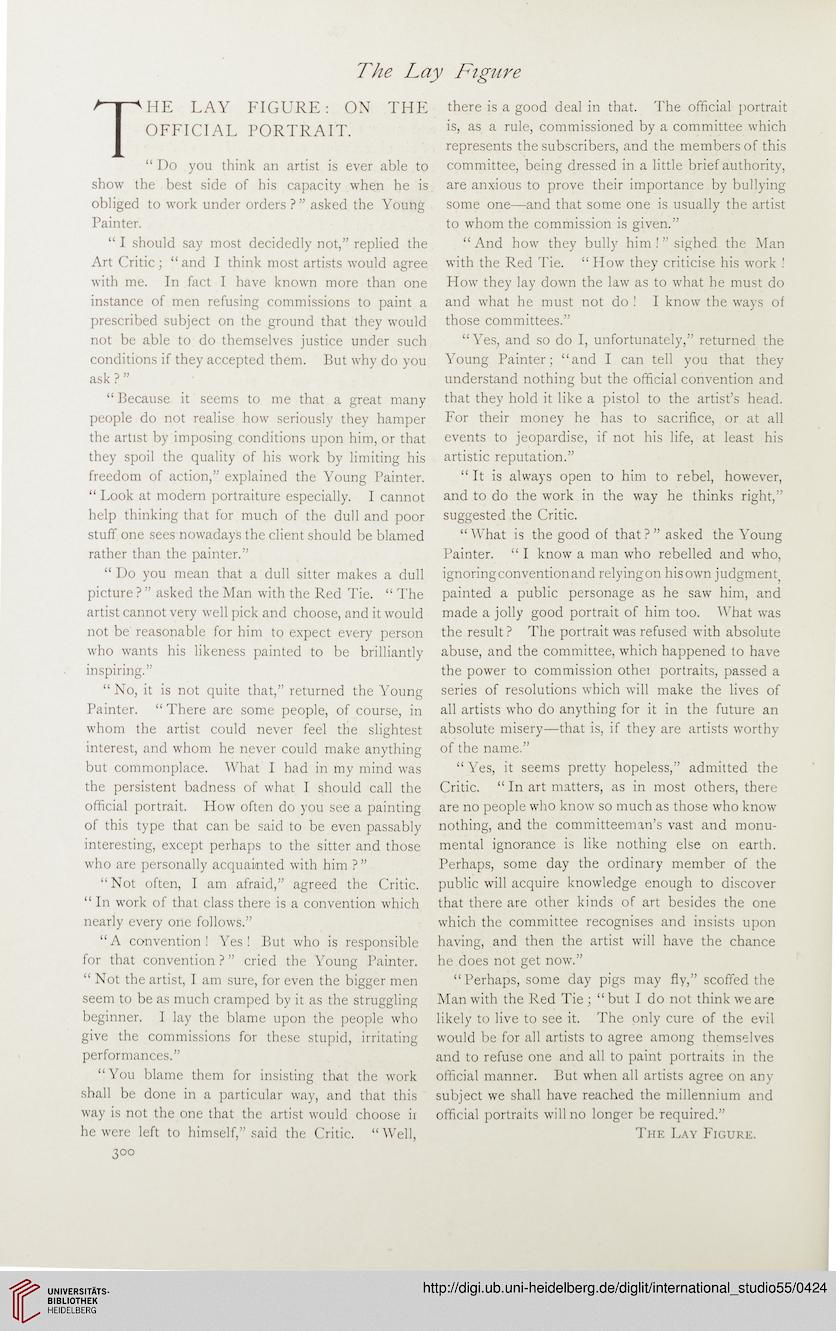 THE LAY FIGURE: ON THE
OFFICIAL PORTRAIT.
“ Do you think an artist is ever able to
show the best side of his capacity when he is
obliged to work under orders ?” asked the Young
Painter.
“ I should say most decidedly not,” replied the
Art Critic; “and I think most artists would agree
with me. In fact I have known more than one
instance of men refusing commissions to paint a
prescribed subject on the ground that they would
not be able to do themselves justice under such
conditions if they accepted them. But why do you
ask ? ”
“Because it seems to me that a great many
people do not realise how seriously they hamper
the artist by imposing conditions upon him, or that
they spoil the quality of his work by limiting his
freedom of action,” explained the Young Painter.
“ Look at modern portraiture especially. I cannot
help thinking that for much of the dull and poor
stuff one sees nowadays the client should be blamed
rather than the painter.”
“ Do you mean that a dull sitter makes a dull
picture ? ” asked the Man with the Red Tie. “ The
artist cannot very well pick and choose, and it would
not be reasonable for him to expect every person
who wants his likeness painted to be brilliantly
inspiring.”
“No, it is not quite that,” returned the Young
Painter. “ There are some people, of course, in
whom the artist could never feel the slightest
interest, and whom he never could make anything
but commonplace. What I had in my mind was
the persistent badness of what I should call the
official portrait. How often do you see a painting
of this type that can be said to be even passably
interesting, except perhaps to the sitter and those
who are personally acquainted with him ?”
“Not often, I am afraid,” agreed the Critic.
“ In work of that class there is a convention which
nearly every one follows.”
“A convention! Yes! But who is responsible
for that convention ? ” cried the Young Painter.
“ Not the artist, I am sure, for even the bigger men
seem to be as much cramped by it as the struggling
beginner. I lay the blame upon the people who
give the commissions for these stupid, irritating
performances.”
“You blame them for insisting that the work
shall be done in a particular way, and that this
way is not the one that the artist would choose ir
he were left to himself,” said the Critic. “Well,
3°°

there is a good deal in that. The official portrait
is, as a rule, commissioned by a committee which
represents the subscribers, and the members of this
committee, being dressed in a little brief authority,
are anxious to prove their importance by bullying
some one—and that some one is usually the artist
to whom the commission is given.”
“ And how they bully him ! ” sighed the Man
with the Red Tie. “ How they criticise his work !
How they lay down the law as to what he must do
and what he must not do ! I know the ways of
those committees.”
“Yes, and so do I, unfortunately,” returned the
Young Painter; “and I can tell you that they
understand nothing but the official convention and
that they hold it like a pistol to the artist’s head.
For their money he has to sacrifice, or at all
events to jeopardise, if not his life, at least his
artistic reputation.”
“ It is always open to him to rebel, however,
and to do the work in the way he thinks right,”
suggested the Critic.
“What is the good of that?” asked the Young
Painter. “ I know a man who rebelled and who,
ignoring convention and relying on his own judgment
painted a public personage as he saw him, and
made a jolly good portrait of him too. What was
the result? The portrait was refused with absolute
abuse, and the committee, which happened to have
the power to commission othei portraits, passed a
series of resolutions which will make the lives of
all artists who do anything for it in the future an
absolute misery—that is, if they are artists worthy
of the name.”
“ Yes, it seems pretty hopeless,” admitted the
Critic. “ In art matters, as in most others, there
are no people who know so much as those who know
nothing, and the committeeman’s vast and monu-
mental ignorance is like nothing else on earth.
Perhaps, some day the ordinary member of the
public will acquire knowledge enough to discover
that there are other kinds of art besides the one
which the committee recognises and insists upon
having, and then the artist will have the chance
he does not get now.”
“Perhaps, some day pigs may fly,” scoffed the
Man with the Red Tie; “but I do not think we are
likely to live to see it. The only cure of the evil
would be for all artists to agree among themselves
and to refuse one and all to paint portraits in the
official manner. But when all artists agree on any
subject we shall have reached the millennium and
official portraits will no longer be required.”
The Lay Figure.