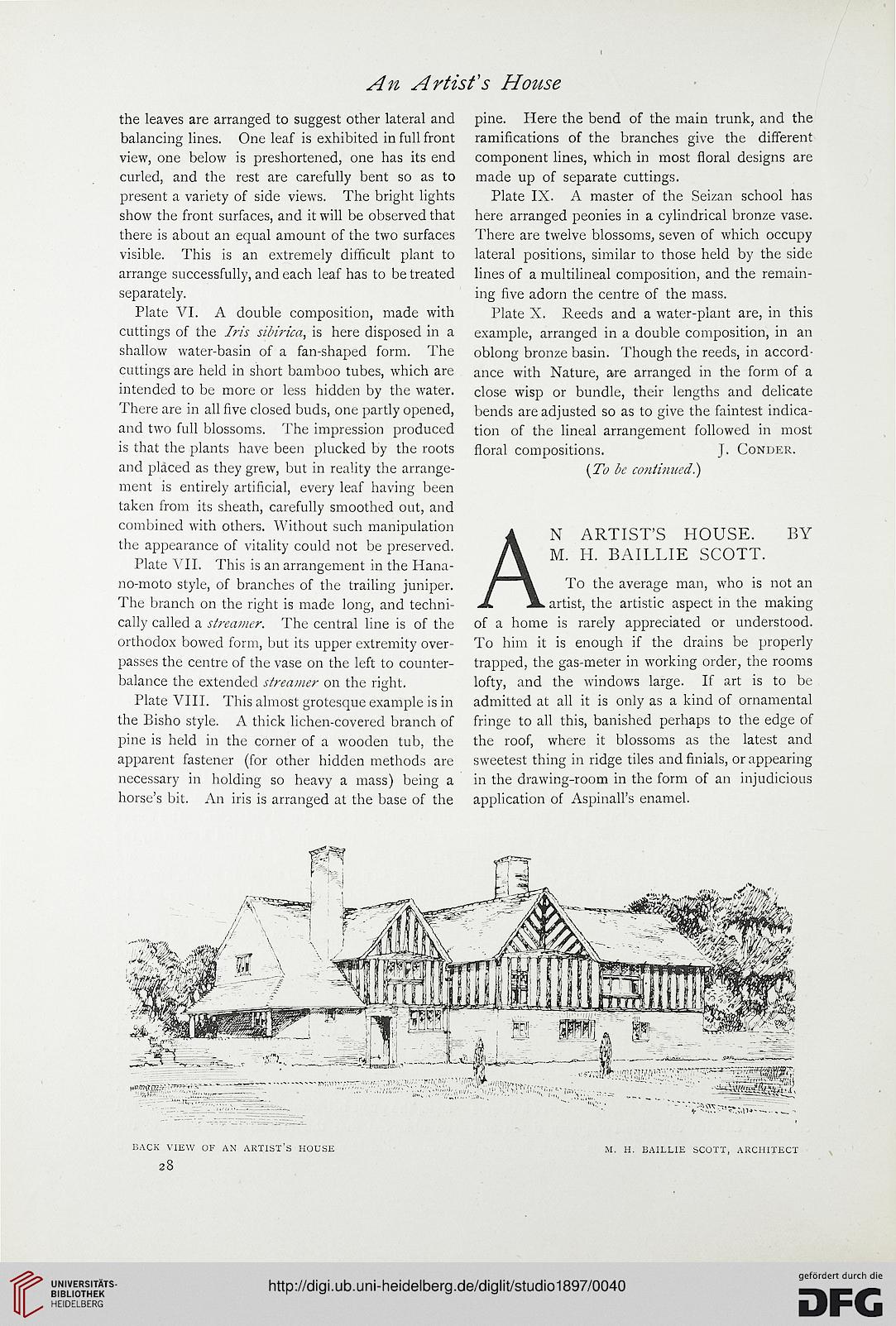 the leaves are arranged to suggest other lateral and
balancing lines. One leaf is exhibited in full front
view, one below is preshortened, one has its end
curled, and the rest are carefully bent so as to
present a variety of side views. The bright lights
show the front surfaces, and it will be observed that
there is about an equal amount of the two surfaces
visible. This is an extremely difficult plant to
arrange successfully, and each leaf has to be treated
separately.

Plate VI. A double composition, made with
cuttings of the Iris sibirica, is here disposed in a
shallow water-basin of a fan-shaped form. The
cuttings are held in short bamboo tubes, which are
intended to be more or less hidden by the water.
There are in all five closed buds, one partly opened,
and two full blossoms. The impression produced
is that the plants have been plucked by the roots
and placed as they grew, but in reality the arrange-
ment is entirely artificial, every leaf having been
taken from its sheath, carefully smoothed out, and
combined with others. Without such manipulation
the appearance of vitality could not be preserved.

Plate ATI. This is an arrangement in the Hana-
no-moto style, of branches of the trailing juniper.
The branch on the right is made long, and techni-
cally called a streamer. The central line is of the
orthodox bowed form, but its upper extremity over-
passes the centre of the vase on the left to counter-
balance the extended streamer on the right.

Plate VIII. This almost grotesque example is in
the Bisho style. A thick lichen-covered branch of
pine is held in the corner of a wooden tub, the
apparent fastener (for other hidden methods are
necessary in holding so heavy a mass) being a
horse's bit. An iris is arranged at the base of the

pine. Here the bend of the main trunk, and the
ramifications of the branches give the different
component lines, which in most floral designs are
made up of separate cuttings.

Plate IX. A master of the Seizan school has
here arranged peonies in a cylindrical bronze vase.
There are twelve blossoms, seven of which occupy
lateral positions, similar to those held by the side
lines of a multilineal composition, and the remain-
ing five adorn the centre of the mass.

Plate X. Reeds and a water-plant are, in this
example, arranged in a double composition, in an
oblong bronze basin. Though the reeds, in accord-
ance with Nature, are arranged in the form of a
close wisp or bundle, their lengths and delicate
bends are adjusted so as to give the faintest indica-
tion of the lineal arrangement followed in most
floral compositions. j. Conder.

To the average man, who is not an
artist, the artistic aspect in the making

of a home is rarely appreciated or understood.
To him it is enough if the drains be properly
trapped, the gas-meter in working order, the rooms
lofty, and the windows large. If art is to be
admitted at all it is only as a kind of ornamental
fringe to all this, banished perhaps to the edge of
the roof, where it blossoms as the latest and
sweetest thing in ridge tiles and finials, or appearing
in the drawing-room in the form of an injudicious
application of Aspinall's enamel.