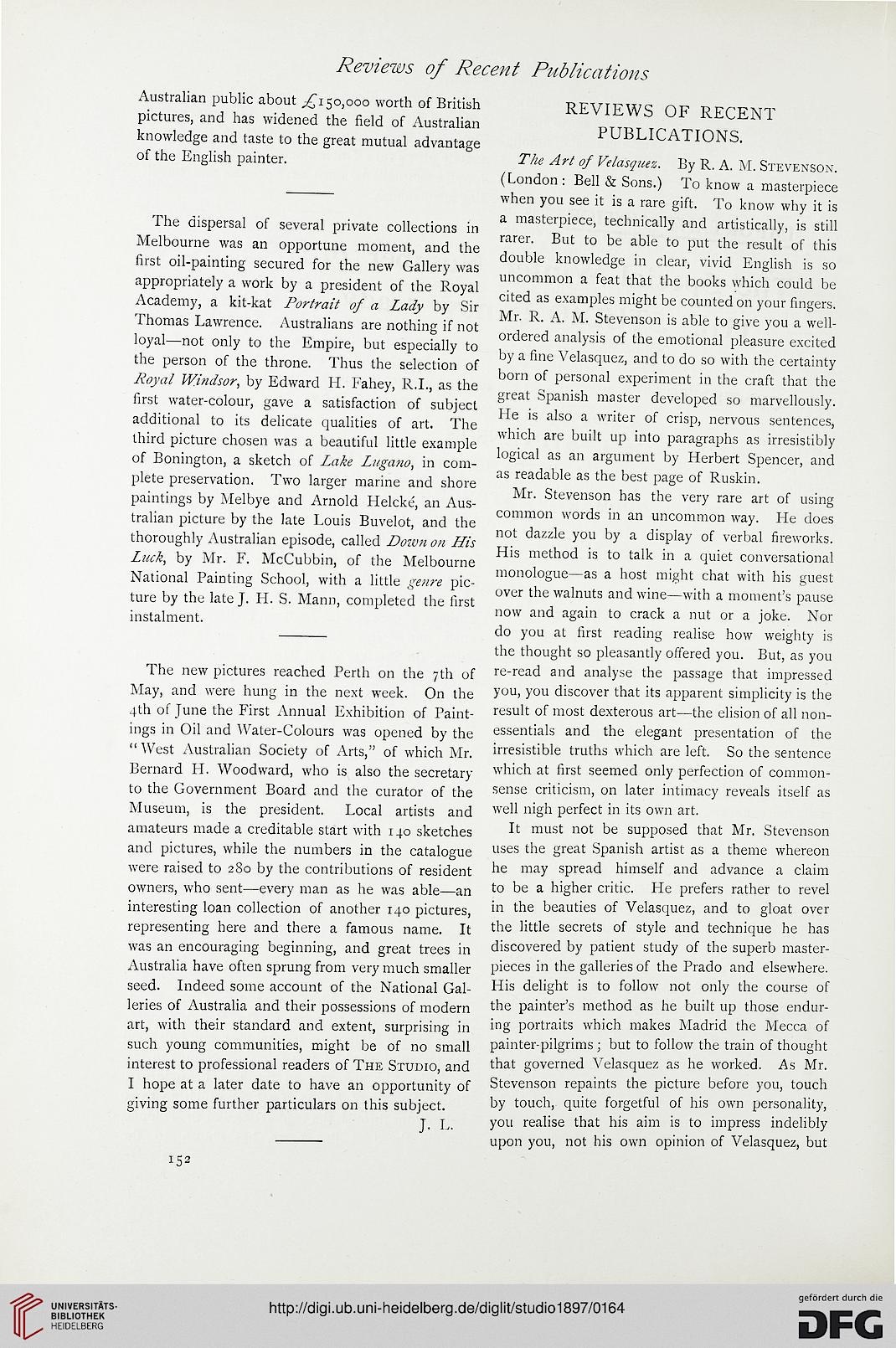 Australian public about ,£150,000 worth of British
pictures, and has widened the field of Australian
knowledge and taste to the great mutual advantage
of the English painter.

The dispersal of several private collections in
Melbourne was an opportune moment, and the
first oil-painting secured for the new Gallery was
appropriately a work by a president of the Royal
Academy, a kit-kat Portrait of a Lady by Sir
Thomas Lawrence. Australians are nothing if not
loyal—not only to the Empire, but especially to
the person of the throne. Thus the selection of
Royal Windsor, by Edward H. Fahey, R.I., as the
first water-colour, gave a satisfaction of subject
additional to its delicate qualities of art. The
third picture chosen was a beautiful little example
of Bonington, a sketch of Lake Lugano, in com-
plete preservation. Two larger marine and shore
paintings by Melbye and Arnold Helcke, an Aus-
tralian picture by the late Louis Buvelot, and the
thoroughly Australian episode, called Down on His
Luck, by Mr. F. McCubbin, of the Melbourne
National Painting School, with a little genre pic-
ture by the late J. H. S. Mann, completed the first
instalment.

The new pictures reached Perth on the 7th of
May, and were hung in the next week. On the
4th of June the First Annual Exhibition of Paint-
ings in Oil and Water-Colours was opened by the
"West Australian Society of Arts," of which Mr.
Bernard H. Woodward, who is also the secretary
to the Government Board and the curator of the
Museum, is the president. Local artists and
amateurs made a creditable start with 140 sketches
and pictures, while the numbers in the catalogue
were raised to 280 by the contributions of resident
owners, who sent—every man as he was able—an
interesting loan collection of another 140 pictures,
representing here and there a famous name. It
was an encouraging beginning, and great trees in
Australia have often sprung from very much smaller
seed. Indeed some account of the National Gal-
leries of Australia and their possessions of modern
art, with their standard and extent, surprising in
such young communities, might be of no small
interest to professional readers of The Studio, and
I hope at a later date to have an opportunity of
giving some further particulars on this subject.

The Art of Velasquez. By R. A. M. Stevenson.
(London : Bell & Sons.) To know a masterpiece
when you see it is a rare gift. To know why it is
a masterpiece, technically and artistically, is still
rarer. But to be able to put the result of this
double knowledge in clear, vivid English is so
uncommon a feat that the books which could be
cited as examples might be counted on your fingers.
Mr. R. A. M. Stevenson is able to give you a well-
ordered analysis of the emotional pleasure excited
by a fine Velasquez, and to do so with the certainty
born of personal experiment in the craft that the
great Spanish master developed so marvellously.
He is also a writer of crisp, nervous sentences,
which are built up into paragraphs as irresistibly
logical as an argument by Herbert Spencer, and
as readable as the best page of Ruskin.

Mr. Stevenson has the very rare art of using
common words in an uncommon way. He does
not dazzle you by a display of verbal fireworks.
His method is to talk in a quiet conversational
monologue—as a host might chat with his guest
over the walnuts and wine—with a moment's pause
now and again to crack a nut or a joke. Nor
do you at first reading realise how weighty is
the thought so pleasantly offered you. But, as you
re-read and analyse the passage that impressed
you, you discover that its apparent simplicity is the
result of most dexterous art—the elision of all non-
essentials and the elegant presentation of the
irresistible truths which are left. So the sentence
which at first seemed only perfection of common-
sense criticism, on later intimacy reveals itself as
well nigh perfect in its own art.

It must not be supposed that Mr. Stevenson
uses the great Spanish artist as a theme whereon
he may spread himself and advance a claim
to be a higher critic. He prefers rather to revel
in the beauties of Velasquez, and to gloat over
the little secrets of style and technique he has
discovered by patient study of the superb master-
pieces in the galleries of the Prado and elsewhere.
His delight is to follow not only the course of
the painter's method as he built up those endur-
ing portraits which makes Madrid the Mecca of
painter-pilgrims ; but to follow the train of thought
that governed Velasquez as he worked. As Mr.
Stevenson repaints the picture before you, touch
by touch, quite forgetful of his own personality,
you realise that his aim is to impress indelibly
upon you, not his own opinion of Velasquez, but