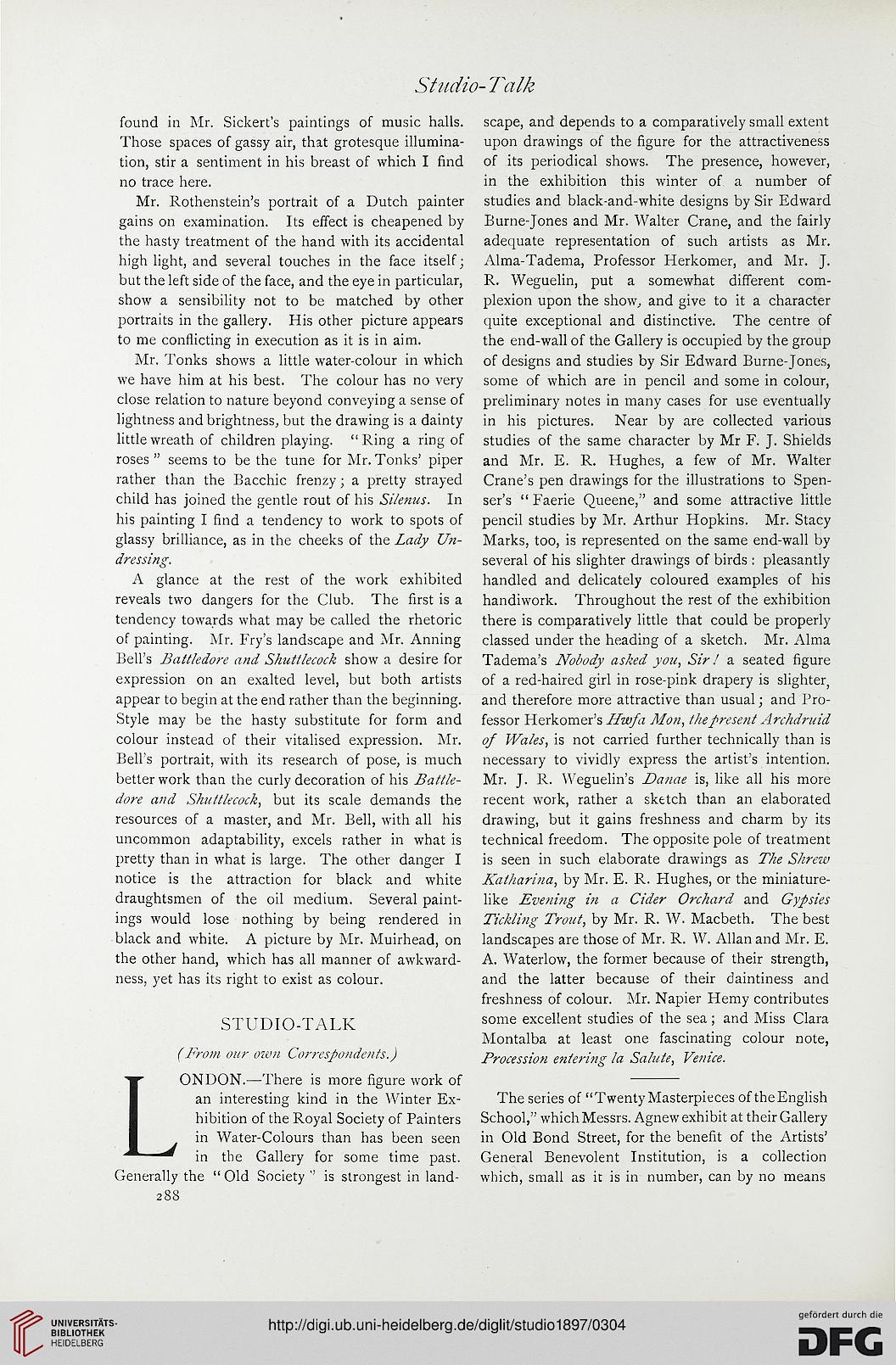 found in Mr. Sickert's paintings of music halls.
Those spaces of gassy air, that grotesque illumina-
tion, stir a sentiment in his breast of which I find
no trace here.

Mr. Rothenstein's portrait of a Dutch painter
gains on examination. Its effect is cheapened by
the hasty treatment of the hand with its accidental
high light, and several touches in the face itself;
but the left side of the face, and the eye in particular,
show a sensibility not to be matched by other
portraits in the gallery. His other picture appears
to me conflicting in execution as it is in aim.

Mr. Tonks shows a little water-colour in which
we have him at his best. The colour has no very
close relation to nature beyond conveying a sense of
lightness and brightness, but the drawing is a dainty
little wreath of children playing. "Ring a ring of
roses " seems to be the tune for Mr. Tonks' piper
rather than the Bacchic frenzy; a pretty strayed
child has joined the gentle rout of his Silenus. In
his painting I find a tendency to work to spots of
glassy brilliance, as in the cheeks of the Lady Un-
dressing.

A glance at the rest of the work exhibited
reveals two dangers for the Club. The first is a
tendency towards what may be called the rhetoric
of painting. Mr. Fry's landscape and Mr. Anning
Bell's Battledore and Shuttlecock show a desire for
expression on an exalted level, but both artists
appear to begin at the end rather than the beginning.
Style may be the hasty substitute for form and
colour instead of their vitalised expression. Mr.
Bell's portrait, with its research of pose, is much
better work than the curly decoration of his Battle-
dore and Shuttlecock, but its scale demands the
resources of a master, and Mr. Bell, with all his
uncommon adaptability, excels rather in what is
pretty than in what is large. The other danger I
notice is the attraction for black and white
draughtsmen of the oil medium. Several paint-
ings would lose nothing by being rendered in
black and white. A picture by Mr. Muirhead, on
the other hand, which has all manner of awkward-
ness, yet has its right to exist as colour.

LONDON.—There is more figure work of
an interesting kind in the Winter Ex-
hibition of the Royal Society of Painters
in Water-Colours than has been seen
in the Gallery for some time past.
Generally the " Old Society is strongest in land-
288

scape, and depends to a comparatively small extent
upon drawings of the figure for the attractiveness
of its periodical shows. The presence, however,
in the exhibition this winter of a number of
studies and black-and-white designs by Sir Edward
Burne-Jones and Mr. Walter Crane, and the fairly
adequate representation of such artists as Mr.
Alma-Tadema, Professor Herkomer, and Mr. J.
R. Weguelin, put a somewhat different com-
plexion upon the show, and give to it a character
quite exceptional and distinctive. The centre of
the end-wall of the Gallery is occupied by the group
of designs and studies by Sir Edward Burne-Jones,
some of which are in pencil and some in colour,
preliminary notes in many cases for use eventually
in his pictures. Near by are collected various
studies of the same character by Mr F. J. Shields
and Mr. E. R. Hughes, a few of Mr. Walter
Crane's pen drawings for the illustrations to Spen-
ser's "Faerie Queene," and some attractive little
pencil studies by Mr. Arthur Hopkins. Mr. Stacy
Marks, too, is represented on the same end-wall by
several of his slighter drawings of birds : pleasantly
handled and delicately coloured examples of his
handiwork. Throughout the rest of the exhibition
there is comparatively little that could be properly
classed under the heading of a sketch. Mr. Alma
Tadema's Nobody asked you, Sir! a seated figure
of a red-haired girl in rose-pink drapery is slighter,
and therefore more attractive than usual; and Pro-
fessor Herkomer's Hwfa Mon, the present Archdmid
of Wales, is not carried further technically than is
necessary to vividly express the artist's intention.
Mr. J. R. Weguelin's Danae is, like all his more
recent work, rather a sketch than an elaborated
drawing, but it gains freshness and charm by its
technical freedom. The opposite pole of treatment
is seen in such elaborate drawings as The Shrew
Katharina, by Mr. E. R. Hughes, or the miniature-
like Evening in a Cider Orchard and Gypsies
Tickling Trout, by Mr. R. W. Macbeth. The best
landscapes are those of Mr. R. W. Allan and Mr. E.
A. Waterlow, the former because of their strength,
and the latter because of their daintiness and
freshness of colour. Mr. Napier Hemy contributes
some excellent studies of the sea ; and Miss Clara
Montalba at least one fascinating colour note,
Procession entering la Salute, Venice.

The series of "Twenty Masterpieces of theEnglish
School," which Messrs. Agnew exhibit at their Gallery
in Old Bond Street, for the benefit of the Artists'
General Benevolent Institution, is a collection
which, small as it is in number, can by no means