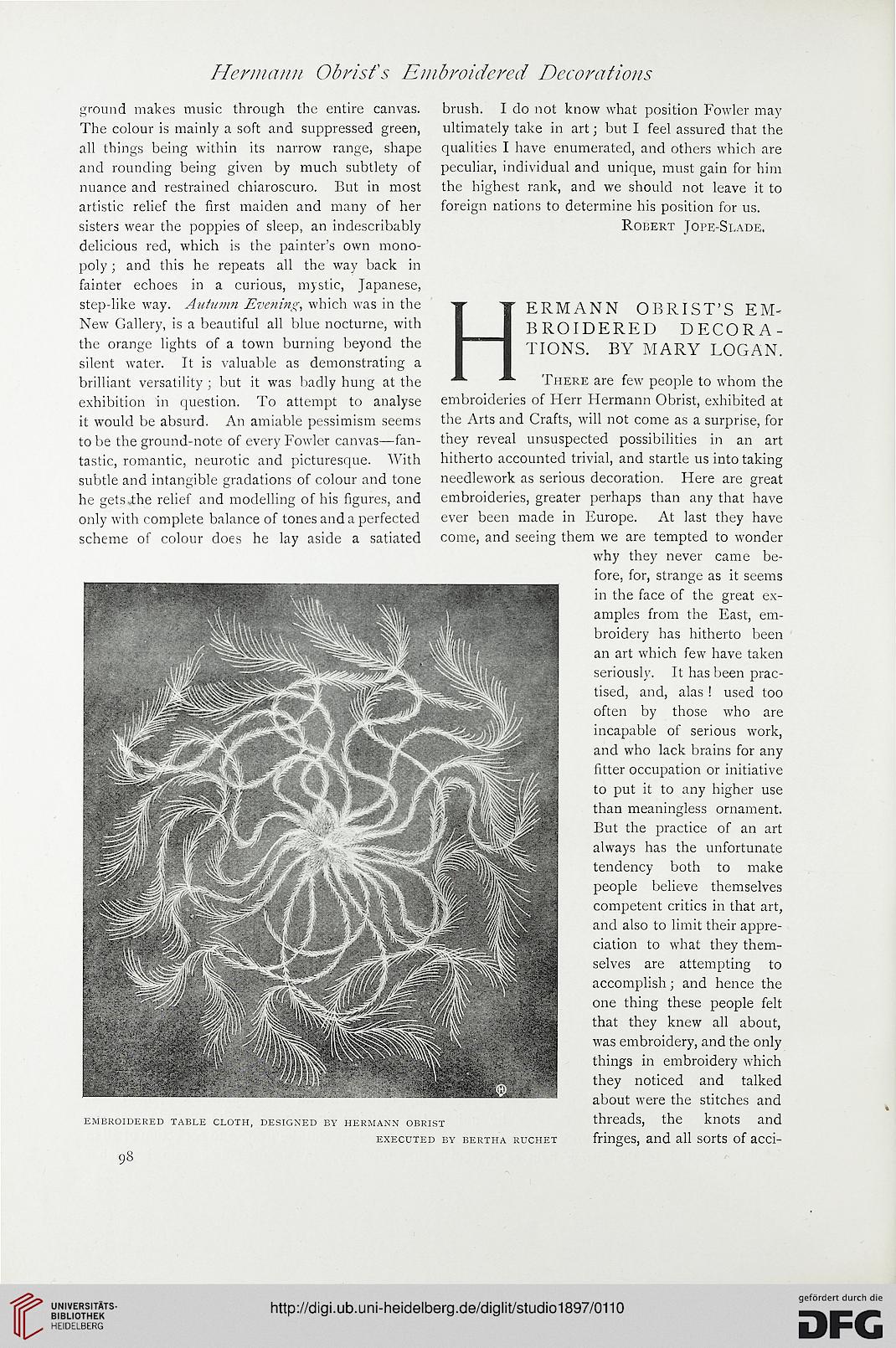 ground makes music through the entire canvas. brush. I do not know what position Fowler may
The colour is mainly a soft and suppressed green, ultimately take in art; but I feel assured that the
all things being within its narrow range, shape qualities I have enumerated, and others which are
and rounding being given by much subtlety of peculiar, individual and unique, must gain for him
nuance and restrained chiaroscuro. But in most the highest rank, and we should not leave it to
artistic relief the first maiden and many of her foreign nations to determine his position for us.
sisters wear the poppies of sleep, an indescribably Roisert Jope-Slade.

delicious red, which is the painter's own mono-
poly ; and this he repeats all the way back in
fainter echoes in a curious, mystic, Japanese,

step-like way. Autumn Evening, which was in the ~jr ERMANN ORRIST'S EM'

New Gallery, is a beautiful all blue nocturne, with BROIDERED DECORA

the orange lights of a town burning beyond the I I TIONS. BY MARY LOGAN
silent water. It is valuable as demonstrating a

brilliant versatility; but it was badly hung at the There are few people to whom the

exhibition in question. To attempt to analyse embroideries of Herr Hermann Obrist, exhibited at
it would be absurd. An amiable pessimism seems the Arts and Crafts, will not come as a surprise, for
to be the ground-note of every Fowler canvas—fan- they reveal unsuspected possibilities in an art
tastic, romantic, neurotic and picturesque. With hitherto accounted trivial, and startle us into taking
subtle and intangible gradations of colour and tone needlework as serious decoration. Here are great
he gets.the relief and modelling of his figures, and embroideries, greater perhaps than any that have
only with complete balance of tones and a perfected ever been made in Europe. At last they have
scheme of colour does he lay aside a satiated come, and seeing them we are tempted to wonder

why they never came be-
fore, for, strange as it seems
in the face of the great ex-
amples from the East, em-
broidery has hitherto been
an art which few have taken
seriously. It has been prac-
tised, and, alas ! used too
often by those who are
incapable of serious work,
and who lack brains for any
fitter occupation or initiative
to put it to any higher use
than meaningless ornament.
But the practice of an art
always has the unfortunate
tendency both to make
people believe themselves
competent critics in that art,
and also to limit their appre-
ciation to what they them-
selves are attempting to
accomplish; and hence the
one thing these people felt
that they knew all about,
was embroidery, and the only
things in embroidery which
they noticed and talked
about were the stitches and

executed by bertha ruchet fringes, and all sorts of acci-