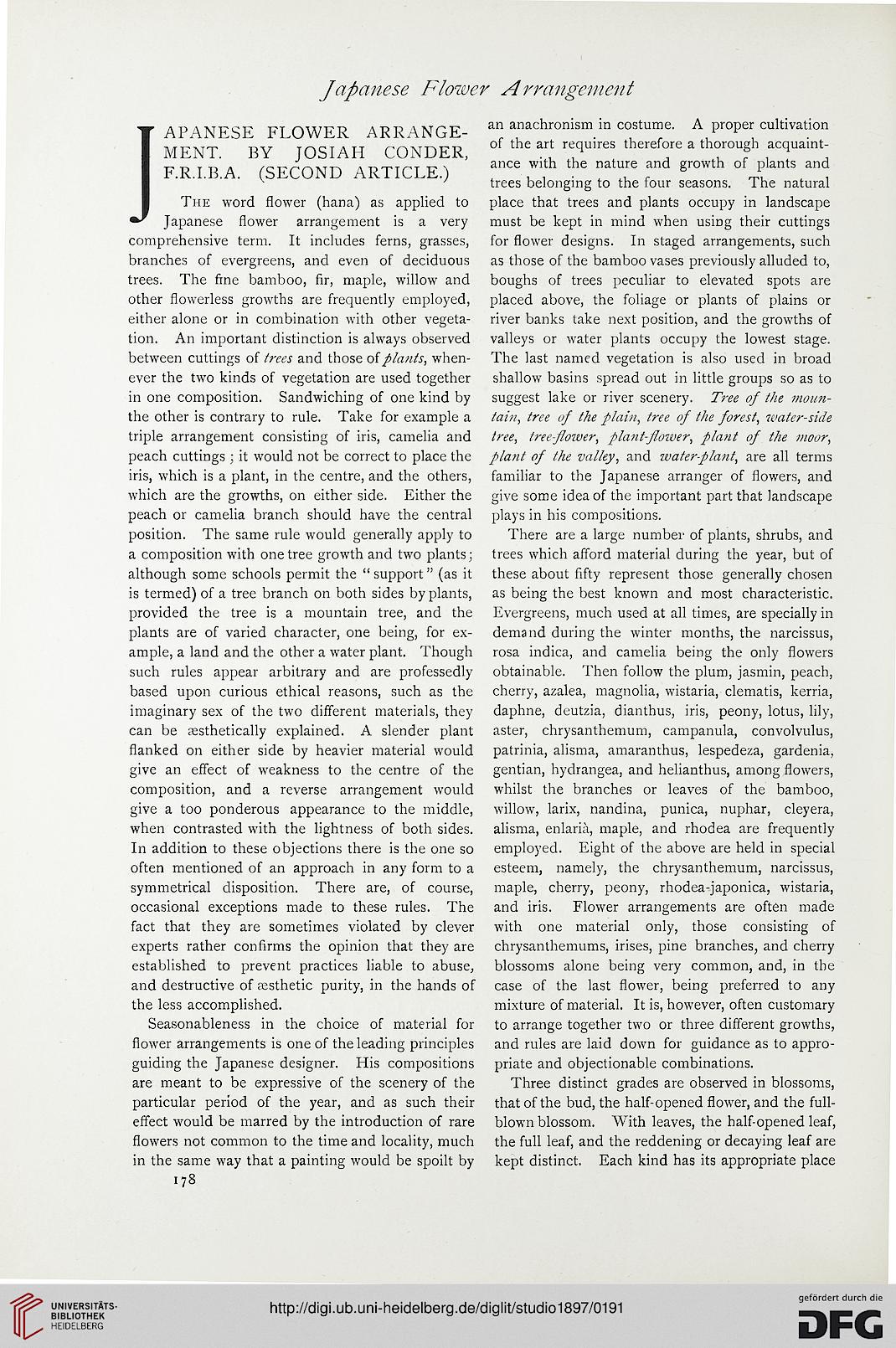 JAPANESE FLOWER ARRANGE-
MENT. BY JOSIAH CONDER,
F.R.I.B.A. (SECOND ARTICLE.)
The word flower (hana) as applied to
Japanese flower arrangement is a very
comprehensive term. It includes ferns, grasses,
branches of evergreens, and even of deciduous
trees. The fine bamboo, fir, maple, willow and
other flowerless growths are frequently employed,
either alone or in combination with other vegeta-
tion. An important distinction is always observed
between cuttings of trees and those of plants, when-
ever the two kinds of vegetation are used together
in one composition. Sandwiching of one kind by
the other is contrary to rule. Take for example a
triple arrangement consisting of iris, camelia and
peach cuttings ; it would not be correct to place the
iris, which is a plant, in the centre, and the others,
which are the growths, on either side. Either the
peach or camelia branch should have the central
position. The same rule would generally apply to
a composition with one tree growth and two plants;
although some schools permit the " support" (as it
is termed) of a tree branch on both sides by plants,
provided the tree is a mountain tree, and the
plants are of varied character, one being, for ex-
ample, a land and the other a water plant. Though
such rules appear arbitrary and are professedly
based upon curious ethical reasons, such as the
imaginary sex of the two different materials, they
can be aesthetically explained. A slender plant
flanked on either side by heavier material would
give an effect of weakness to the centre of the
composition, and a reverse arrangement would
give a too ponderous appearance to the middle,
when contrasted with the lightness of both sides.
In addition to these objections there is the one so
often mentioned of an approach in any form to a
symmetrical disposition. There are, of course,
occasional exceptions made to these rules. The
fact that they are sometimes violated by clever
experts rather confirms the opinion that they are
established to prevent practices liable to abuse,
and destructive of aesthetic purity, in the hands of
the less accomplished.

Seasonableness in the choice of material for
flower arrangements is one of the leading principles
guiding the Japanese designer. His compositions
are meant to be expressive of the scenery of the
particular period of the year, and as such their
effect would be marred by the introduction of rare
flowers not common to the time and locality, much
in the same way that a painting would be spoilt by
178

an anachronism in costume. A proper cultivation
of the art requires therefore a thorough acquaint-
ance with the nature and growth of plants and
trees belonging to the four seasons. The natural
place that trees and plants occupy in landscape
must be kept in mind when using their cuttings
for flower designs. In staged arrangements, such
as those of the bamboo vases previously alluded to,
boughs of trees peculiar to elevated spots are
placed above, the foliage or plants of plains or
river banks take next position, and the growths of
valleys or water plants occupy the lowest stage.
The last named vegetation is also used in broad
shallow basins spread out in little groups so as to
suggest lake or river scenery. Tree of the moun-
tain, tree of the plain, tree of the forest, water-side
tree, tree-flower, plant-flower, plant of the moor,
plant of the valley, and water-plant, are all terms
familiar to the Japanese arranger of flowers, and
give some idea of the important part that landscape
plays in his compositions.

There are a large number of plants, shrubs, and
trees which afford material during the year, but of
these about fifty represent those generally chosen
as being the best known and most characteristic.
Evergreens, much used at all times, are specially in
demand during the winter months, the narcissus,
rosa indica, and camelia being the only flowers
obtainable. Then follow the plum, jasmin, peach,
cherry, azalea, magnolia, wistaria, clematis, kerria,
daphne, dcutzia, dianthus, iris, peony, lotus, lily,
aster, chrysanthemum, campanula, convolvulus,
patrinia, alisma, amaranthus, lespedeza, gardenia,
gentian, hydrangea, and helianthus, among flowers,
whilst the branches or leaves of the bamboo,
willow, larix, nandina, punica, nuphar, cleyera,
alisma, enlaria, maple, and rhodea are frequently
employed. Eight of the above are held in special
esteem, namely, the chrysanthemum, narcissus,
maple, cherry, peony, rhodea-japonica, wistaria,
and iris. Flower arrangements are often made
with one material only, those consisting of
chrysanthemums, irises, pine branches, and cherry
blossoms alone being very common, and, in the
case of the last flower, being preferred to any
mixture of material. It is, however, often customary
to arrange together two or three different growths,
and rules are laid down for guidance as to appro-
priate and objectionable combinations.

Three distinct grades are observed in blossoms,
that of the bud, the half-opened flower, and the full-
blown blossom. With leaves, the half-opened leaf,
the full leaf, and the reddening or decaying leaf are
kept distinct. Each kind has its appropriate place