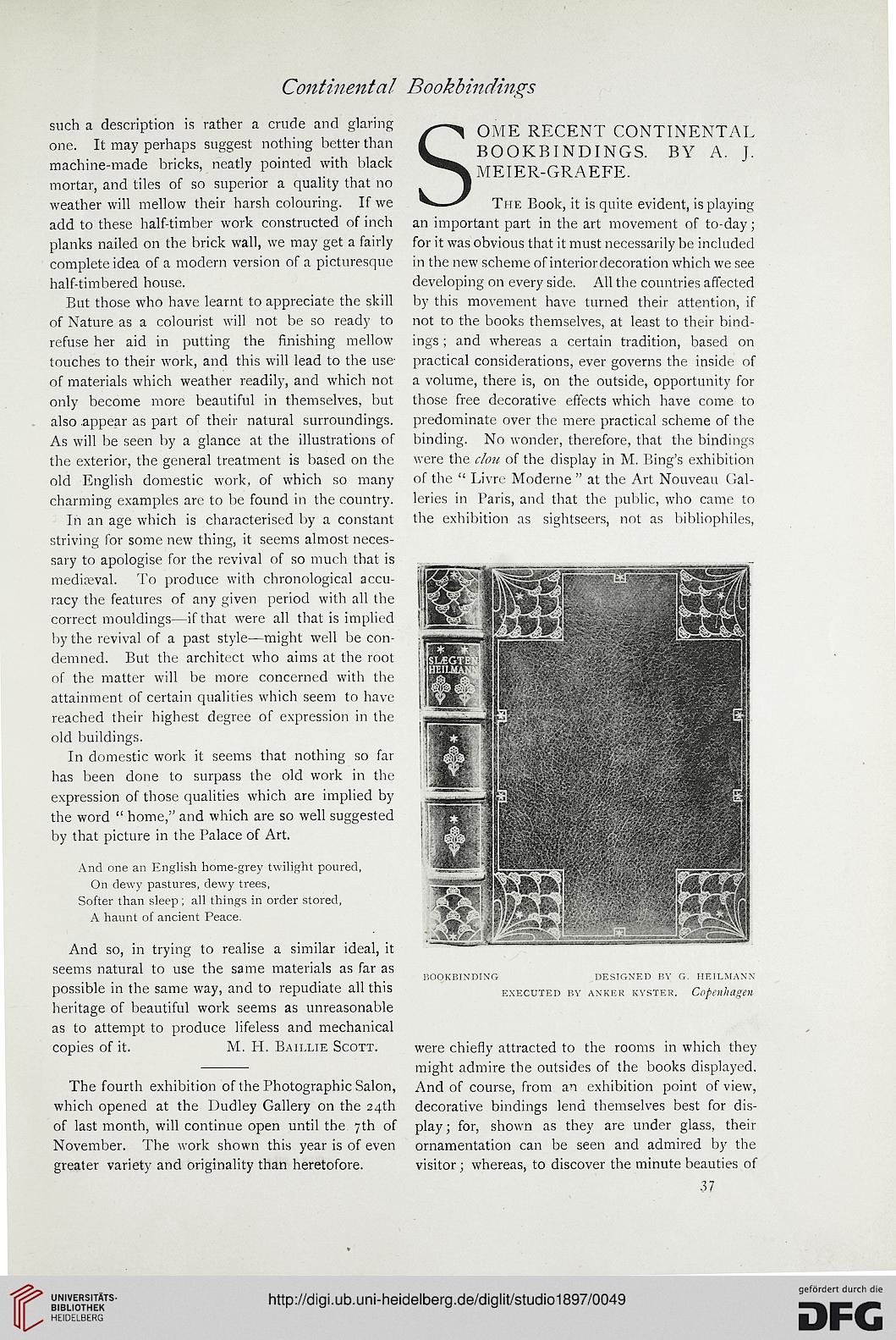 one. It may perhaps suggest nothing better than i BOOKBINDINGS BY A

machine-made bricks, neatly pointed with black ^^^^MFJER CRAEFE
mortar, and tiles of so superior a quality that no
weather will mellow their harsh colouring. If we V^-^ The Book, it is quite evident, is playing
add to these half-timber work constructed of inch an important part in the art movement of to-day;
planks nailed on the brick wall, we may get a fairly for it was obvious that it must necessarily be included
complete idea of a modern version of a picturesque in the new scheme of interior decoration which we see
half-timbered house. developing on every side. All the countries affected

But those who have learnt to appreciate the skill by this movement have turned their attention, if
of Nature as a colourist will not be so ready to not to the books themselves, at least to their bind-
refuse her aid in putting the finishing mellow ings ; and whereas a certain tradition, based on
touches to their work, and this will lead to the use- practical considerations, ever governs the inside of
of materials which weather readily, and which not a volume, there is, on the outside, opportunity for
only become more beautiful in themselves, but those free decorative effects which have come to
also .appear as part of their natural surroundings, predominate over the mere practical scheme of the
As will be seen by a glance at the illustrations of binding. No wonder, therefore, that the bindings
the exterior, the general treatment is based on the were the clou of the display in M. Bing's exhibition
old English domestic work, of which so many of the " Livre Moderne " at the Art Nouveau Gal-
charming examples are to be found in the country, leries in Paris, and that the public, who came to

In an age which is characterised by a constant the exhibition as sightseers, not as bibliophiles,
striving for some new thing, it seems almost neces-
sary to apologise for the revival of so much that is
mediaeval. To produce with chronological accu-
racy the features of any given period with all the
correct mouldings—if that were all that is implied
by the revival of a past style—might well be con-
demned. But the architect who aims at the root
of the matter will be more concerned with the
attainment of certain qualities which seem to have
reached their highest degree of expression in the
old buildings.

In domestic work it seems that nothing so far
has been done to surpass the old work in the
expression of those qualities which are implied by
the word " home," and which are so well suggested
by that picture in the Palace of Art.

And one an English home-grey twilight poured,

On dewy pastures, dewy trees,
Softer than sleep ; all things in order stored,

A haunt of ancient Peace.

And so, in trying to realise a similar ideal, it
seems natural to use the same materials as far as

possible in the same way, and to repudiate all this executed by anker kyster. Copenhagen

copies of it. M. H. Bait/lie Scott. were chiefly attracted to the rooms in which they

The fourth exhibition of the Photographic Salon, And of course, from an exhibition point of view,

of last month, will continue open until the 7th of play; for, shown as they are under glass, their

November. The work shown this year is of even ornamentation can be seen and admired by the

greater variety and originality than heretofore. visitor; whereas, to discover the minute beauties of