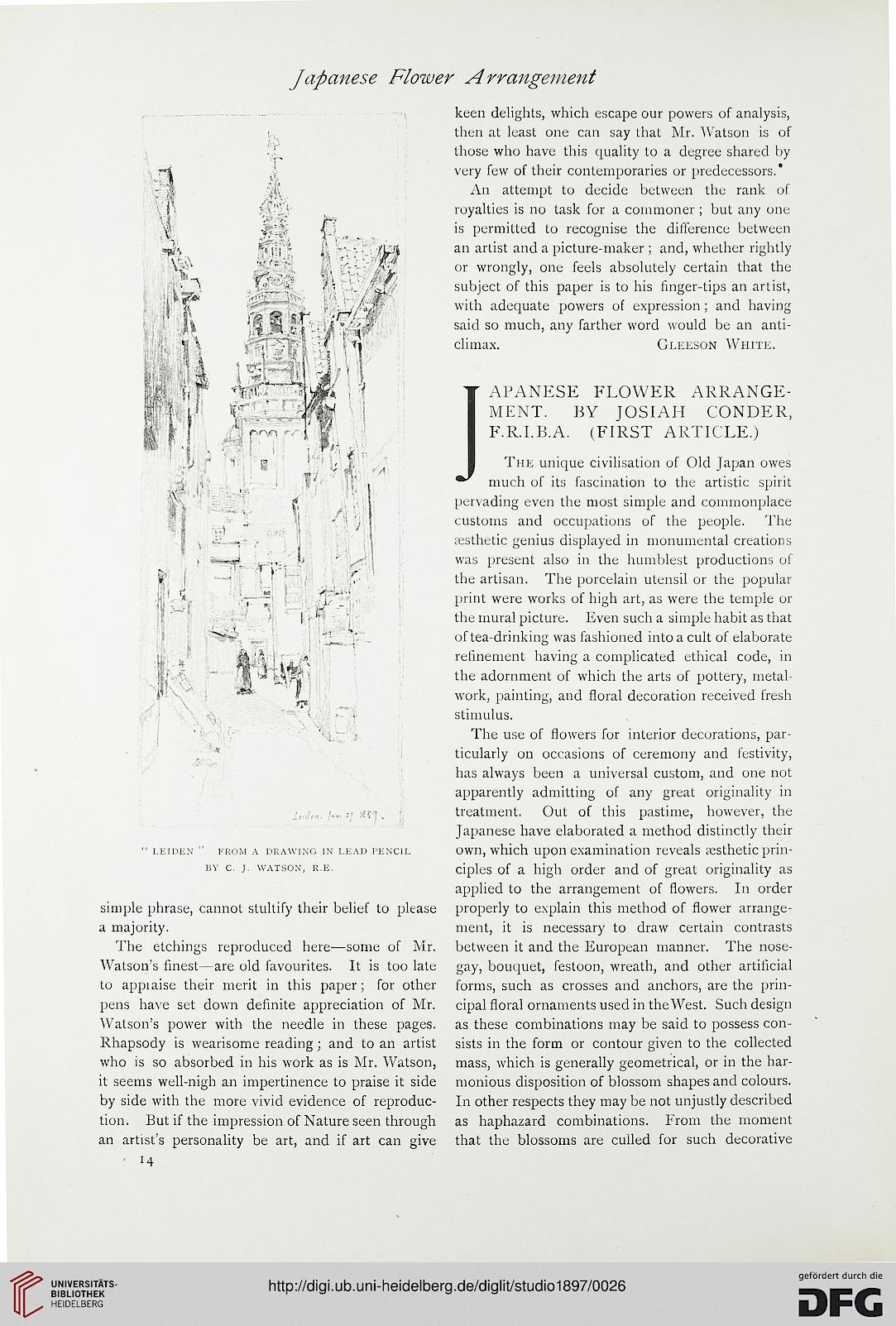 simple phrase, cannot stultify their belief to please
a majority.

The etchings reproduced here—some of Mr.
Watson's finest—are old favourites. It is too late
to appiaise their merit in this paper ; for other
pens have set down definite appreciation of Mr.
Watson's power with the needle in these pages.
Rhapsody is wearisome reading; and to an artist
who is so absorbed in his work as is Mr. Watson,
it seems well-nigh an impertinence to praise it side
by side with the more vivid evidence of reproduc-
tion. But if the impression of Nature seen through
an artist's personality be art, and if art can give

keen delights, which escape our powers of analysis,
then at least one can say that Mr. Watson is of
those who have this quality to a degree shared by
very few of their contemporaries or predecessors. *

An attempt to decide between the rank of
loyalties is no task for a commoner ; but any one
is permitted to recognise the difference between
an artist and a picture-maker ; and, whether rightly
or wrongly, one feels absolutely certain that the
subject of this paper is to his finger-tips an artist,
with adequate powers of expression ; and having
said so much, any farther word would be an anti-
climax. Gleeson White.

JAPANESE FLOWER ARRANGE-
MENT. BY JOSIAH CONDER,
E.R.I.B.A. (FIRST ARTICLE.)
The unique civilisation of Old Japan owes
much of its fascination to the artistic spirit
pervading even the most simple and commonplace
customs and occupations of the people. The
aesthetic genius displayed in monumental creations
was present also in the humblest productions of
the artisan. The porcelain utensil or the popular
print were works of high art, as were the temple or
the mural picture. Even such a simple habit as that
of tea-drinking was fashioned into a cult of elaborate
refinement having a complicated ethical code, in
the adornment of which the arts of pottery, metal-
work, painting, and floral decoration received fresh
stimulus.

The use of flowers for interior decorations, par-
ticularly on occasions of ceremony and festivity,
has always been a universal custom, and one not
apparently admitting of any great originality in
treatment. Out of this pastime, however, the
Japanese have elaborated a method distinctly their
own, which upon examination reveals aesthetic prin-
ciples of a high order and of great originality as
applied to the arrangement of flowers. In order
properly to explain this method of flower arrange-
ment, it is necessary to draw certain contrasts
between it and the European manner. The nose-
gay, bouquet, festoon, wreath, and other artificial
forms, such as crosses and anchors, are the prin-
cipal floral ornaments used in the West. Such design
as these combinations may be said to possess con-
sists in the form or contour given to the collected
mass, which is generally geometrical, or in the har-
monious disposition of blossom shapes and colours.
In other respects they may be not unjustly described
as haphazard combinations. From the moment
that the blossoms are culled for such decorative